Warning: Use of undefined constant wp_cumulus_widget - assumed 'wp_cumulus_widget' (this will throw an Error in a future version of PHP) in /home/customer/www/whatifpost.com/public_html/wp-content/plugins/wp-cumulus/wp-cumulus.php on line 375
 Fact checking the Vice-Presidential debate
≡ Menu 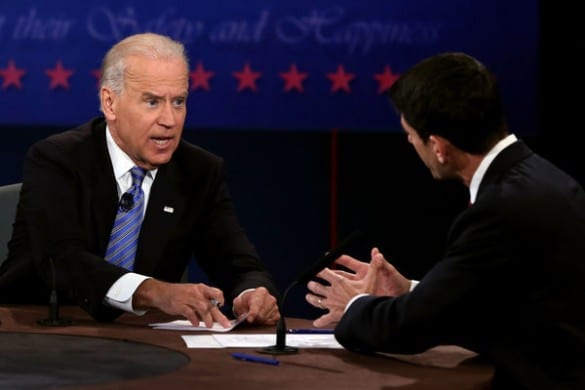 Last Thursday was the Vice Presidential debate, and just like the first presidential debate there was plenty of talk about Medicare and “Obamacare.” And so, once again we went back to the transcript and checked out every health care claim to see which ones stood up.  Paul Ryan repeated a number of false and misleading claims that Mitt Romney made in the first debate (for explanations of why they’re wrong, check out our fact check of that debate):

President Obama got a few facts wrong in the first debate too, but Biden mostly steered clear of those. He did repeat the claim that Paul Ryan’s original Medicare plan would increase costs for seniors by $6,400. That’s actually true, but Romney’s proposal is slightly different, and no one really knows how it will affect seniors’ premiums. As the New York Times put it:

“Mr. Romney has not specified how much money he would give to future beneficiaries to buy coverage, or how fast it would grow — making the effects of his proposal difficult to assess.”

Meanwhile, both sides made a number of new points too. Here’s how they square with the facts.

REP. RYAN: “This board, by the way, it’s 15 people. The president’s supposed to appoint them next year. And not one of them even has to have medical training.”

FALSE: Ryan is talking about the Independent Payment Advisory Board, which will make recommendations to Congress on ways to reduce Medicare spending. Here’s what the law actually says about the make-up of the board:

The appointed membership of the Board shall include (but not be limited to) physicians and other health professionals, experts in the area of pharmaco-economics or prescription drug benefit programs, employers, third-party payers, individuals skilled in the conduct and interpretation of biomedical, health services, and health economics research and expertise in outcomes and effectiveness research and technology assessment. Such membership shall also include representatives of consumers and the elderly.

RYAN: “Their own actuary from the administration came to Congress and said one out of six hospitals and nursing homes are going to go out of business as a result of this.”

TRUE, BUT: Medicare’s chief actuary did say that, in their analysis, around 15% of hospitals could become unprofitable due to reduced payments under the Affordable Care Act (i.e. the $716 billion in “cuts”). However, he did not say that the hospitals would go out of business. What he actually said is that the law might not save as much money as expected, because if hospitals are struggling, Congress could bump their payments back up. Here’s Foster’s exact quote:

Simulations by the Office of the Actuary suggest that roughly 15 percent of [hospitalization] providers would become unprofitable within the 10-year projection period as a result of the productivity adjustments. Although this policy could be monitored over time to avoid such an outcome, changes would likely result in smaller actual savings than described here for these provisions.

And second, there’s good reason to think Medicare’s actuary is wrong on this one. The New Republic’s Jonathan Cohn lays out why:

Plenty of smart and honest analysts take a different view. They point out that the Affordable Care Act doesn’t simply make crude, across-the-board payment reductions—as, say, the Balanced Budget Act of 1997 did. Instead, Obamacare also introduces incentives designed to reward efficiency. In addition, the Affordable Care Act’s expansion of coverage—remember, it will mean 30 million additional Americans have insurance—should reduce the number of uninsured people showing up at the emergency room, easing the charity care burden on hospitals.

Keep in mind that the hospital industry endorsed the Affordable Care Act. If it had thought the cuts were too steep, rest assured, it would have howled. And the hospitals may already be adapting, if early indications are correct.

RYAN: “This is a plan that’s bipartisan. It’s a plan I put together with a prominent Democrat senator from Oregon.”

MISLEADING: Senator Ron Wyden (D-Oreg.) did join Paul Ryan in putting forth a proposal that among other things would have provided a premium-support/voucher option alongside traditional Medicare. But Wyden says the plan Ryan put before Congress was so different from their original proposal that he could no longer support it:

My view is that the policies that were adopted by the Republican House majority and the Romney campaign do not preserve the Medicare guarantee. And that’s what the [Ryan/Wyden] white paper was all about. […] That’s why I went to the floor when we were debating the Ryan budget in the Senate and spoke specifically against the Medicare portion and voted against it.

VICE PRESIDENT BIDEN: “If they allow Medicare to bargain for the cost of drugs like Medicaid can, that would save $156 billion right off the bat.”

TRUE: Unlike Medicaid, Medicare is prohibited by law from negotiating drug prices on behalf of beneficiaries, which is why Medicaid gets much steeper discounts on drugs.  A paper in the journal Health Economics looked at what would happen if Medicare used its purchasing power to negotiate drug prices like the VA and Medicaid. The authors found that Medicare would save about $140 billion over ten years– that’s using 2009 prices; use 2012 prices and it would be right around $156 billion.

RYAN: “And it would deny seniors choices.”

TRUE: The reason the VA can get lower prices is that it doesn’t have to cover popular drugs when there’s a cheaper, just as effective alternative. From the paper’s summary:

The VA’s national formulary covers 59% of the top 200 drugs while Medicare PDPs cover between 68% and 93% of those drugs, averaging about 85% covered. So, if Medicare plans looked more like the VA, a lot fewer drugs would be covered.

We should reiterate though– this doesn’t mean that seniors wouldn’t be able to get needed medication. It just means that if there’s a cheaper, just as effective alternative, Medicare might not cover the more expensive drug. But that does represent a loss of choice, so Ryan is correct.

FALSE: You might remember that this was kind of a big deal when the House passed the new law, but once again– under the Affordable Care Act federal funds still can’t be used to pay for abortion. From an issue brief by the nonpartisan Kaiser Family Foundation:

The ACA reinforces current federal restrictions, limiting federal funds to be spent on abortions only to cases when the pregnancy endangers the life of the woman or results from rape or incest. This will not change for Medicaid under health reform; state Medicaid programs will continue to have the option to cover other medically necessary abortions using only state funds and no federal funds[…]

And to make sure that no taxpayer money funds abortion in the exchanges either, if individuals want to purchase abortion coverage, they have to pay for it separately:

Plans that receive federal subsidies would have to collect two premium payments from all enrollees, including men and women of all ages. One payment would be for the value of the abortion benefit and the other payment would be for all other services. The funds would be deposited in separate allocation accounts, overseen and managed by state health insurance commissioners.

TRUE (WITH A BUT): Washington Post’s Sarah Kliff has already done a good fact check of this point:

[Biden]’s referring there to a compromise that the Obama administration worked out earlier this year, for religious institutions that oppose that provision, where the insurance company – rather than the religious employer – pays for contraceptive costs.

Religious institutions have argued that that isn’t a strong enough protection. Since they pay into the the insurance plan, by contributing to employer premiums, these employers argue that their funds could potentially end up being used to cover the contraceptives they oppose. The guidance from the Obama administration, issued in February, does not address this concern.

RYAN: Of the 21 tax increases in “Obamacare,” 12 of them hit the middle class.

MISLEADING: We’re assuming Ryan’s using this list of taxes from Republican  chair of the House Ways and Means committee, David Camp. There are a couple issues with this list.

For starters, his list includes a couple things that aren’t taxes, like the requirement that employers list health insurance on W2’s. You still don’t have to pay taxes on that money, it’s just so you can see how much your employer is spending on your insurance. Ryan calls that and another reporting requirement taxes, even though the nonpartisan Joint Committee on Taxation says they won’t bring in any money.

As for the twelve taxes hitting the middle class, Ryan and Camp include things like taxes on insurers and providers, apparently assuming they’ll be passed on to customers. But those industries agreed to the taxes knowing that Obamacare would increase the pool of customers, increasing their profits while bringing prices down for customers. Calling them taxes on the middle class  is a stretch.

For an explanation of all the taxes in the new health law, check out our earlier post here.

FALSE: We’re pretty sure Biden meant to say Medicaid– repealing the Affordable Care Act and other changes in Ryan’s budget would actually knock more than 19 million people out of that program. Under Ryan’s proposals all seniors would continue to get Medicare though (or a voucher for private insurance).