Warning: Use of undefined constant wp_cumulus_widget - assumed 'wp_cumulus_widget' (this will throw an Error in a future version of PHP) in /home/customer/www/whatifpost.com/public_html/wp-content/plugins/wp-cumulus/wp-cumulus.php on line 375
 Double shot of depressing Medicaid news from the New York Times
≡ Menu 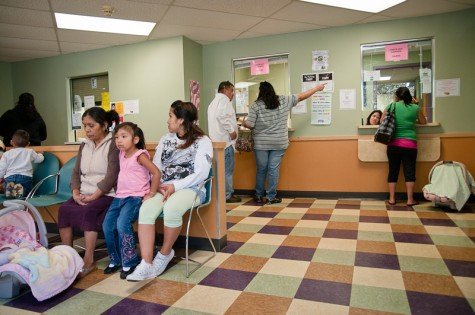 Children with Medicaid are far more likely than those with private insurance to be turned away by medical specialists or be made to wait more than a month for an appointment, even for serious medical problems, a new study finds.

Lower payments by Medicaid, delays in paying and red tape are largely to blame, researchers say.

The study used a “secret shopper” technique in which researchers posed as the parent of a sick or injured child and called 273 specialty practices in Cook County, Ill., to schedule appointments […]

Sixty-six percent of those who mentioned Medicaid-CHIP (Children’s Health Insurance Program) were denied appointments, compared with 11 percent who said they had private insurance, according to an article being published Thursday in The New England Journal of Medicine.

In 89 clinics that accepted both kinds of patients, the waiting time for callers who said they had Medicaid was an average of 22 days longer.

“It’s very disturbing,” Dr. Karin Rhodes [author of the study and director of emergency care policy research at the University of Pennsylvania] said. “As a mother, if I had a kid who was having seizures or newly diagnosed juvenile diabetes, I would want to get them in right away.”

With many states planning cuts in Medicaid, Dr. Rhodes said, public insurance programs were already being strained to the breaking point. “If we keep whittling away at them, it will hurt children and adults alike,” she said.

The same day, the Times reported that states are, well, whittling away at Medicaid programs as billions of dollars in extra funding from the federal government to help during the recession are about to run out:

From New Jersey to California, state officials are bracing for the end to more than $90 billion in federal largess specifically designated for Medicaid. To hold down costs, states are cutting Medicaid payments to doctors and hospitals, limiting benefits for Medicaid recipients, reducing the scope of covered services, requiring beneficiaries to pay larger co-payments and expanding the use of managed care.

As a result, costs can be expected to rise in other parts of the health care system. Cuts in Medicaid payments to doctors, for example, make it less likely that they will accept Medicaid patients and more likely that people will turn to hospital emergency rooms for care. Hospitals and other health care providers often try to make up for the loss of Medicaid revenue by increasing charges to other patients, including those with private insurance, experts say.

Neither the White House nor Congress has tried to extend the extra federal financing for Medicaid, even though the number of beneficiaries is higher now than when Congress approved the aid as part of an economic recovery package in February 2009.

Previous post: (Yet another) update from the health reform court battle