Warning: Use of undefined constant wp_cumulus_widget - assumed 'wp_cumulus_widget' (this will throw an Error in a future version of PHP) in /home/customer/www/whatifpost.com/public_html/wp-content/plugins/wp-cumulus/wp-cumulus.php on line 375
 Checking in on Obamacare
≡ Menu

Checking in on Obamacare 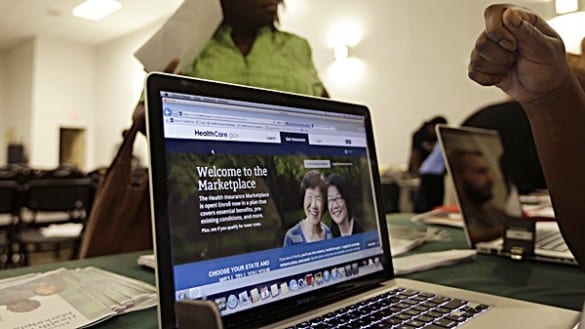 Now that the websites are mostly working, and the first Obamacare plans have finally taken effect, we figured it would be a good time to see how things are going for the new law. There’s a lot of good news– millions of people have gotten coverage– but there are still a bunch of technical problems that are preventing more people from signing up.

Millions of people have gotten covered: As of December 28, just over 2.1 million people had purchased coverage on the exchanges. That’s fewer than the White House’s original target of 3.3 million enrollees by that date, but considering that most of the websites have only been working for a month or so, it’s an encouraging turnout. Meanwhile, Medicaid enrollments are even higher– officially 3.9 million enrolled in the program by the end of 2013, but the actual figure may be as high as 6.4 million.

Ok, caveat time: it’s hard to say how many of those people are newly covered. A bunch of them had coverage before Obamacare and simply found new plans on the marketplaces. And the Medicaid count (whichever number you use) includes people who enrolled directly at state Medicaid offices, which means that the figures include some people who were just renewing their coverage. It’ll be a while before we know what effect Obamacare has had on the number of uninsured.

Death of the “death spiral”: Another concern before the launch of the exchanges was whether enough young people would enroll to prevent an insurance “death spiral” (the term for what happens when the pool of people a plan covers is sicker than expected, and premiums skyrocket). To keep premiums low, the White House estimates that about 38% of the people buying coverage on the exchanges need to be between the ages of 18 and 34. Right now about 24% of the enrollees are in that age bracket.

So why is that good news? Well, for one thing that figure is almost certain to increase as we get closer to the March 31 deadline to buy coverage for 2014. The Washington Post’s Ezra Klein writes:

Major health laws always follow the same pattern: The people who badly need insurance sign up first, and they tend to be older and sicker. Younger people sign up later — typically right before the penalty hits. So far, the age pattern in Obamacare enrollment is tracking the age pattern in enrollment for the Massachusetts reforms quite closely: 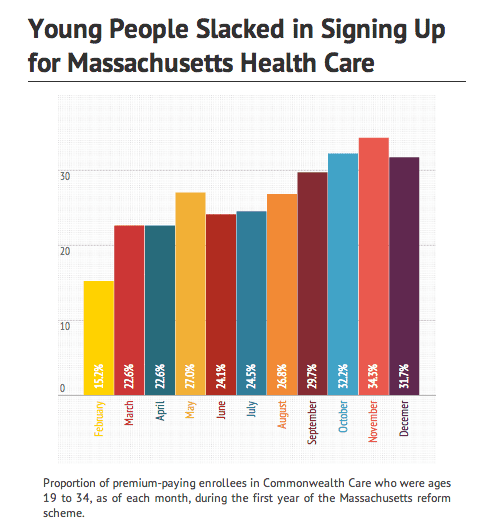 But even if the percentage of young adults buying coverage freezes at its current level (which, again, is extremely unlikely), the nonpartisan Kaiser Family Foundation crunched the numbers and found that “overall costs in individual market plans would be about 2.4% higher than premium revenues.” In other words, even in the worst case scenario, premiums might rise a few percent, depending on the state. Sure, that’s not great, but it’s no death spiral.

Another good sign is that insurance companies are looking at the same figures and aren’t worried. During a recent conference for healthcare executives, Wellpoint’s chief financial officer Wayne DeVeydt said:

“Things aren’t necessarily way out of whack with our expectations. It’s not about whether or not you’re getting a sicker book. It’s whether you priced for it.”

In other words, ignore the White House’s target– what really matters is if insurers are getting fewer young people than they expected, and so far that’s not the case. Said Aetna CEO Mark Bertolini at the same conference:

“Given the general demographics that CMS released yesterday, I’m not alarmed. They’re better than I thought they would have been.”

Some people are having trouble using their new coverage: While the fact that over 2 million people have signed up on the exchanges is good news, the massive influx is causing its own headaches. The New York Times reports:

Interviews with doctors, hospital executives, pharmacists and newly insured people around the country suggest that the biggest challenge so far has been verifying coverage. A surge of enrollments in late December, just before the deadline for coverage to take effect, created backlogs at many state and federal exchanges and insurance companies in processing applications. As a result, many of those who enrolled have yet to receive an insurance card, policy number or bill.

Normally verifying whether or not you have coverage is simple– you just call the insurance company to double check– but with so many people doing that at the same time insurers are struggling to keep up. WellPoint’s customer service received a million calls on the first two days of January alone– as many as they normally get in an entire month. Unfortunately now the only thing to do is wait while insurers go through the backlog.

Medicaid enrollment is broken on healthcare.gov: If the online marketplace determines you qualify for Medicaid, you’re supposed to be able to enroll right there. Unfortunately that part of the site isn’t working, and as a result tens of thousands of applicants have been left in limbo reports Kaiser Health News. There’s a way around this– applicants can go to their state’s Medicaid website to sign up, but that means re-answering many of the same questions about age, family, size, income, etc. and waiting for a new eligibility determination from the state. So even though potential Medicaid applicants aren’t totally stuck, enrollment in the program is difficult.

Adding a baby is not easy: If you buy coverage through the exchange and you have a major life event, like a baby, marriage or divorce, death in the family, a new job, or a change in income, you’re supposed to report it to the exchange, which would then let you change your policy and update the financial assistance you may be eligible for accordingly. However, this feature is also currently not working. If you do need to add or drop a family member, you’re not totally out of luck– you can contact the insurer directly– but to report it to the marketplace and update your subsidy eligibility to help cover premiums, you’ll have to wait until this part of the site is fixed.

Some people are stuck in verification steps: A number of people we’ve talked to said that healthcare.gov couldn’t verify either their identity or income electronically, and they were asked to submit additional documents before they could proceed. Many of those who submitted documents are still waiting to hear back, again, probably because of the large number of applicants.

Websites only just started working in some states (and in Oregon it still doesn’t work): There were 14 states that built their own exchanges, and, after some setbacks, most have managed to fix any major problems. However, in Maryland, Oregon, and Minnesota, technical problems continue to plague the sites– they’ve managed to sign up some people, but enrollment is a lot lower than it could be.

The Spanish version of healthcare.gov has its own issues: A story from the Associated Press highlights a number of problems:

And the translations were so clunky and full of grammatical mistakes that critics say they must have been computer-generated — the name of the site itself can literally be read “for the caution of health.”

“When you get into the details of the plans, it’s not all written in Spanish. It’s written in Spanglish, so we end up having to translate it for them,” said Adrian Madriz, a health care navigator who helps with enrollment in Miami.

Also, there are a lot fewer people at the Spanish-language Obamacare helpline, so if people do have trouble with the site, they may have trouble getting help over the phone as well.

While that might sound like a long list of problems, it’s important to keep in mind that these are all technical glitches that will eventually get fixed– they don’t tell us much about how successful the end result will be. New York Magazine’s Jonathan Chait compares it to renovating a house:

Obamacare opponents have tried to paint the frustrations as a collapse in progress — every time an electrician fails to show up or a part is unavailable or a design plan has to be rejiggered, they use it as proof that the whole thing is going to collapse. But it was never going to collapse, because renovating a house, like having a national health-care system, is something that is fundamentally doable.

As with fixing up an old house, even if the renovation process itself is a mess, the end result is almost always an improvement. We’re hoping the same is true for Obamacare.

Next post: No, Obamacare does not contain an insurance company bailout