Warning: Use of undefined constant wp_cumulus_widget - assumed 'wp_cumulus_widget' (this will throw an Error in a future version of PHP) in /home/customer/www/whatifpost.com/public_html/wp-content/plugins/wp-cumulus/wp-cumulus.php on line 375
 Are Republicans serious about fixing Medicare?
≡ Menu

Are Republicans serious about fixing Medicare? 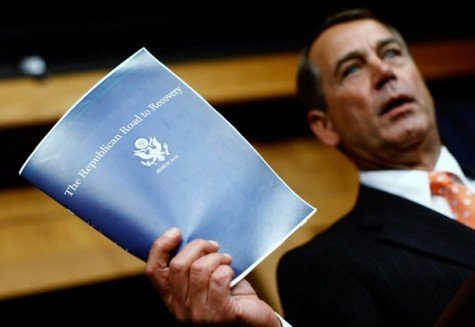 In the 2010 midterm elections, Republicans hammered Democrats over the Affordable Care Act, saying (falsely) that it “gutted Medicare.” Now many of those same Republicans are complaining that President Obama failed to offer cuts to Medicare and Social Security in his budget proposal.

Confused? We are too.

What They Said Then

Last year, the Republican Party and its allies funneled millions into TV ads last year accusing Democrats from Pennsylvania to Missouri of “gutting Medicare” and “hurting seniors.” — charges that compelled older voters to swing en masse toward the GOP.

In particular, the GOP and conservative groups accused Democrats of cutting $500 billion from Medicare, in ads like this one:

And the strategy worked:

In the 2006 midterm election, seniors split their vote evenly between House Democrats and Republicans. In 2010, they went for Republicans by a twenty-one-point margin. The impact of that swing was magnified by the fact that seniors, always pretty reliable midterm voters, were particularly fired up: nearly a quarter of the votes cast were from people over sixty-five.

Cut to four months later. This is John Boehner talking to the Wall Street Journal about how Republicans hope to tackle Medicare and Social Security in next year’s budget:

“I offered to the president we could lock arms and walk out and begin the conversation about the size of the problem,” Mr. Boehner said, adding that Mr. Obama responded “positively.”

But he also took aim at Mr. Obama for not proposing a plan to overhaul the programs. “I think the president shrank from his responsibility to lead,” Mr. Boehner said. “He knows the numbers as well as we do.”

He made the same point to CNBC’s Larry Kudlow:

So to recap, John Boehner:

He’s now saying that the President “shrank from his responsibility to lead” on fixing Medicare.

And it’s not just John Boehner:

“I don’t think anyone has a desire to cut Medicare, but there are ways of streamlining it to be more efficient,” said Sen. Orrin Hatch (R-Utah), the ranking member on the Finance Committee, which oversees the program.

“All those things” are in the health reform law! Here’s how the Affordable Care Act deals with all the things on Hatch’s list.

This is why Democrats proposed changes to Medicare Advantage in the new health law.

Dealing with Over-Prescribing and Over-Providing

Another provision in the health reform law was for “comparative effectiveness review.” The Washington Post’s Ezra Klein explains what that is:

Comparative-effectiveness review is a fancy term for studies that test multiple drugs or treatments against one another to see which one works best — studies, in other words, that compare them for effectiveness. That way, when doctors go to prescribe something for you, they’re prescribing the thing that’ll do the most to help you at the lowest cost. My hunch is that most patients think comparative-effectiveness review is already how medicine works, and would be dismayed to learn how little good evidence there is behind what their doctor is telling them.

It’s a no-brainer reform– give doctors the information to prescribe the treatment that works best, and they won’t waste a ton of money (and risk potentially harmful side effects) by prescribing stuff that doesn’t work. Yet likely Republican presidential candidate Mike Huckabee has described CER as “the poisonous tree of death panels will grow.”  And in January of 2009, Republican Senate leaders cosponsored legislation banning Medicare from using comparative-effectiveness review data to make coverage decisions.

Klein points out that by fighting reform which would make Medicare smarter about what it buys, Republicans are left with only a couple options to deal with out of control costs:

In other words instead of smart reform, we’d get dumb rationing.

The Way Forward
The Affordable Care Act is a big step towards getting health care costs under control, but chances are more will have to be done. It’s heartening that Republican leaders have at least acknowledged that this should be a priority. If they’re serious about dealing with the issue, a good first step would be to offer a more honest take on the Affordable Care Act, and to stop blocking even the common sense reforms.

Next post: Understanding Japan’s nuclear crisis: the basics of radiation and health

Previous post: Some New Rules for Talking About Health Reform