Warning: Use of undefined constant wp_cumulus_widget - assumed 'wp_cumulus_widget' (this will throw an Error in a future version of PHP) in /home/customer/www/whatifpost.com/public_html/wp-content/plugins/wp-cumulus/wp-cumulus.php on line 375
 A closer look at Obamacare’s new rules for insurance plans
≡ Menu

A closer look at Obamacare’s new rules for insurance plans 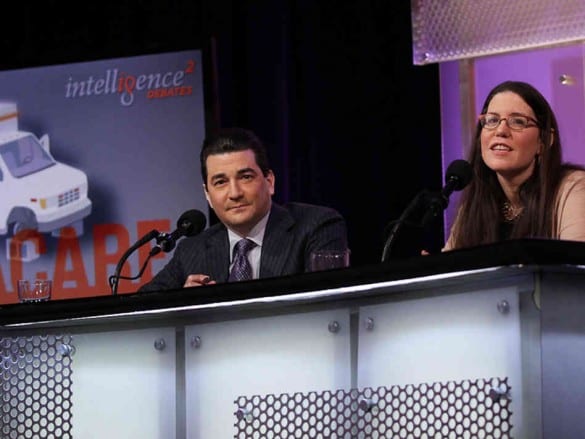 What’s inherently wrong with this law is the way that the law tries to prescribe a uniform federal standard for what needs to be in everyone’s insurance policy. And so these decisions get made in a political context, and you end up with policies that are exceedingly expensive, laden down with mandates that don’t meet what consumers want.

Forbes’ Avik Roy, a former healthcare advisor to Mitt Romney made the same point in a recent conversation with The New Republic’s Jonathan Cohn, saying that the “ACA went too far with the micromanaging and that’s why the plans are more expensive than they needed to be.”

So which description makes more sense: “consumer protections” or “expensive federal micromanaging”? The best way to decide is to look at the regulations they’re actually describing.

According to Mark Bertolini, the CEO of Aetna, one of the nation’s largest health insurers, the biggest reason some peoples’ premiums are increasing is the minimum actuarial requirement. Actuarial value can be kind of tricky to understand if you’re not, well, an actuary (we try to explain here if you’re REALLY interested), but the main thing to know is that the smaller a plan’s actuarial value, the more you pay out-of-pocket.

The lowest level Obamacare plans most people can buy will be bronze, which have an actuarial value of 60%. But according to Bertolini, over half the plans sold on the individual market before Obamacare had actuarial values below 50%.

Here’s why that’s important. Many plans with low actuarial values sold before Obamacare were what the insurance industry called “limited benefit” or “mini-med” plans, but Consumer Reports calls “junk health insurance.” To give just one example, take 56-year-old Diane Barrett. CBS News reported that under Obamacare her premiums skyrocketed from $54 a month to $591 a month. Sounds terrible, but when Mediaite’s Tommy Christopher looked into it, he found that Barrett’s old plan only paid the first $50 of the medical services it covered, which would have left Barrett with enormous out-of-pocket costs if she ever did get sick. Obamacare’s 60% minimum actuarial value will prevent insurers from selling such crappy policies.

Conservatives would probably argue that not all the plans sold before Obamacare were junk insurance, and many people were fine with high-deductible, catastrophic plans. But if you look on the exchanges, most bronze plans have pretty high deductibles– there’s not a ton of difference between them and catastrophic coverage– and the catastrophic plans that comply with Obamacare’s other popular provisions are often roughly the same price.

These new standards for coverage make some plans more expensive than they were before Obamacare (especially the requirement that plans can’t exclude sick people), but it’s hard to argue that consumers don’t want or need these benefits:

(Poll results for the provisions above are from a NY Times/CBS News Poll. The health tracking poll from Kaiser Family Foundation shows similar results.)

When conservative health experts are asked to cite specific examples of unwanted benefits under Obamacare, they point to certain specific medical services that plans have to cover. It’s worth looking, then, at how these benefits are determined under the new law.

Diane Barrett, the woman we mentioned earlier whose insurance plan turned out to be junk, illustrates why it’s important to specify essential health benefits. Her “insurance” didn’t cover hospital visits at all– something most people would assume every plan would cover. To make sure plans actually cover the basic things enrollees need, Obamacare law sets a minimum standard.

The new law doesn’t actually spell out every procedure– it just lays out ten general categories of care:

It was then up to the Department of Health and Human Services to figure out the details, and on that they deferred to the states.

States were given a few options: they could pick (1) one of the state’s biggest employer plans covers, (2) the state’s largest non-Medicaid HMO, or (3) the state employee plan and basically tell insurers to cover whatever was in that. In other words, essential benefits were based on popular plans already available in the state. While opponents might rail against the fact that Obamacare plans have to cover acupuncture in California, that’s not a requirement written into the ACA– California just chose to model their essential benefits on a plan that covers acupuncture. Other states chose differently.

Conservatives also oppose some of the new general categories of essential care that actually are written in the law– in the past many plans on the individual market didn’t cover mental health, substance abuse, maternity, habilitative services (services for people who were born with disabilities), or pediatric oral and vision care. Lately the rallying cry for some conservatives is “Men don’t have babies– why should they have to pay for maternity care?”

Ignoring the total unawareness of where babies come from, the larger point seems to be this: Why can’t we buy coverage a la carte and only pay for the services we think we’ll need? The answer is pretty straightforward– that’s not how health insurance works. MSNBC’s Geoffrey Kowley explains:

In practical terms, we all end up more secure when we pool our risks. I may not get diabetes and you may never have a traumatic injury. But if both our plans cover both conditions, neither of us will be bankrupted by either of them. If I lack that coverage, an unexpected illness or injury may empty my wallet and affect yours as well, when your taxes have to help cover my unpaid medical bills.

“Society pays the price one way or another,” says Timothy Jost, a health care expert at Washington and Lee Law School—”and the price is often lower when you pay it up front.”

By the way, if you agree with the idea that there should be a minimum standard for plans (which Roy, in his conversation with Cohn, does), you also need to provide some sort of subsidy to help people afford that better coverage. And that’s basically Obamacare in a nutshell.

Next post: The Obamacare deadline is Monday. Here’s a last-minute guide to buying coverage.