Warning: Use of undefined constant wp_cumulus_widget - assumed 'wp_cumulus_widget' (this will throw an Error in a future version of PHP) in /home/customer/www/whatifpost.com/public_html/wp-content/plugins/wp-cumulus/wp-cumulus.php on line 375
 2017 was actually a pretty good year for the ACA (in Trump-adjusted terms)
≡ Menu 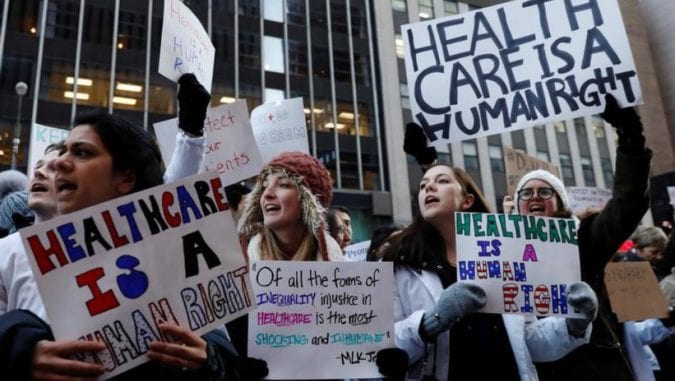 It’s also a good way to think about the state of American healthcare in 2017. For those of us who believe that everyone in this country should have access to affordable healthcare, the raw numbers are disappointing:

Still though, if you had told us that a year into the Trump administration the vast majority of the ACA would still be standing and covering almost as many people as it had in 2016, we would have been relieved. In other words, 2017 was a pretty good year for the ACA… in Trump-adjusted terms. Here are three reasons why.

Republicans in Congress had been promising to repeal and replace the Affordable Care Act since the law passed in 2010, and in 2017 they controlled both houses of Congress and the presidency. Things did not look good.

However, while the GOP had spend seven years arguing that Obamacare was a disaster that needed to be repealed, they had pretty much ignored the “replace” part of their “repeal and replace” pledge. It turns out that writing a health reform bill is complicated (who knew?) and what the GOP wanted– less federal spending on healthcare and less government involvement– also meant providing worse coverage and covering fewer people. People who were at risk of losing coverage were, of course, not happy and let their elected representatives know loudly and often.

Republican leaders Paul Ryan and Mitch McConnell knew that as more people found out what the bills actually did the less popular those bills became, and responded by trying to jam them through Congress as quickly as possible. This meant no public hearings, no CBO scores (at least until after Congresspeople had voted),  and not even a pretense of trying to work with Democrats. In the end though, even this strategy failed, as Senator John McCain, citing concerns about the process, joined Senators Susan Collins, Lisa Murkowski, and every single Democrat in voting down the last ditch “skinny repeal” bill. (Here’s how crazy the process got: Senate Republican leaders were reportedly still writing the bill over lunch the day of the vote.)

President Trump has tried to argue that when he and Congressional Republicans repealed the individual mandate as part of their tax bill in December, “We have essentially repealed Obamacare.” As usual, Trump is wrong.

It’s true that the individual mandate is an important part of the ACA– it gives younger, healthier people an incentive to buy insurance instead of waiting until they get sick. But now that the ACA has been up and running for a few years, there’s some debate as to how important it actually is.

For starters, the penalty isn’t that large– as Vox’s health reporter, Dylan Scott, points out, “For many people who might be on the fence, it is still cheaper to pay the penalty than to purchase health coverage.” Also, most people who get coverage under the ACA qualify for subsidies to help cover their premiums– so even if some healthier people do drop out because there’s no longer a mandate, most people who remain won’t see their premiums go up significantly. (However, those who make too much to qualify for subsidies will see their premiums jump.)

In its score of the GOP tax plan, the nonpartisan Congressional Budget Office estimated that repealing the individual mandate would result in 13 million fewer people insured by 2027 and would increase premiums by 10%. Those estimates may be too high though: the CBO is in the process of updating the way it estimates the effects of the individual mandate, and it recently stated that, “The preliminary results of analysis using revised methods indicates that the estimated effects on health insurance coverage will be smaller” than the old estimates.

However, even if the CBO’s original estimate is correct, that still means that even without the mandate, up to 20 million people who would have been uninsured will still have coverage thanks to the ACA.

While Congress tried to repeal Obamacare, the Trump administration tried to sabotage it by ending cost sharing reduction (CSR) payments to insurers.

We have a longer explanation of CSR’s here, but basically, under the ACA, people with incomes lower than 250% of the federal poverty line get a subsidy that reduces their out-of-pocket costs if they by a Silver level plan. In 2014, House Republicans sued to stop the payment of these subsidies, which go directly to insurers, saying that Congress had never appropriated the money to pay them. The Obama administration of course disagreed, and the case had been making its way through the courts, but in October the Trump administration said it was simply going to end the CSR payments, starting in 2018.

Insurers still have to reduce out-of-pocket costs on Silver plans for the folks making less than 250% of the poverty level though, despite the fact that they’re not getting reimbursed. In most states insurers responded by increasing premiums for Silver plans by about 14% on average. So successful sabotage by the Trump administration, right? Not so fast.

For anyone making less than 400% of the poverty line, your premium subsidy is tied to the cost of the second cheapest Silver plan, but you can use it one any level of plan. If you want to use it on a Silver plan, then not much changes– premiums for Silver plans increased by 14% on average, but so did your subsidy, so the cost to you is roughly the same. But you could use your subsidy on a Gold or Platinum plan, which tends to have much lower deductibles. Premiums for those plans didn’t change, but your subsidy is a lot higher, so the price you actually pay for these better plans is a lot lower than it was last year. In many places, you can likely get a Gold plan for roughly what you were paying for a Silver plan last year– a way better deal.

The people who lose out are those whose incomes are above 400% of the poverty line– too high to qualify for subsidies. They pay sticker prices, and all of the sudden sticker prices for silver plans in 2018 are 14% higher than they would have been. However, in states that run their own marketplaces there’s a solution for that too, which health policy nerds have dubbed the “silver switcheroo.” Basically insurers can offer the same Silver plan on and off the marketplaces– Silver plans offered off-marketplace would be slightly cheaper (basically the price they’d have been without Trump’s CSR sabotage). Folks who don’t qualify for subsidies can buy that folks who do qualify for subsidies buy on-marketplace, where their higher subsidies cancel out the higher premiums.

We know that’s a little hard to follow– Charles Gaba at the website ACA Signups has a much more in-depth explanation here. But the main takeaway is that while the Trump administration saw ending the CSR’s as a chance to weaken Obamacare, taking them away meant that many lower income people can now get better coverage at a lower cost than before.

3. Despite Trump’s best efforts to break the ACA, nearly as many people signed up for coverage as last year

The Trump administration also took a number of steps to make it harder for people to learn about coverage options and harder to enroll through healthcare.gov. New York Magazine’s Eric Levitz listed some of them:

Trump’s Health Department cut funding for the law’s outreach groups; slashed Obamacare’s advertising budget by 90 percent; spent a portion of the remaining ad budget on propaganda calling for the law’s repeal; cut the open-enrollment period by 45 days; announced that it would be taking Healthcare.gov (where people can enroll in Obamacare online) offline for nearly every Sunday during that time period, for “maintenance” purposes; and derided the law in official statements as “a bad deal” that “many won’t be convinced to sign up for.”

And yet, despite all these efforts to discourage people from enrolling, 8.8 million people signed up through healthcare.gov during this year’s open enrollment– just 4.5% fewer than last year. We don’t have a final count on the total number of signups because open enrollment is still happening in some states that run their own marketplaces. However, those state-run marketplaces have been doing even better than last year, so the final tally of signups through all the marketplaces will likely come pretty close last year’s 12 million enrollments.

Given all the ways the Trump administration tried to sabotage Obamacare in 2017, that’s an impressive figure. However, as Levitz notes, “In the absence of such concerted sabotage, enrollment would have almost certainly been far higher.” In other words, if the ACA held up better than we expected under Trump and a Republican Congress in 2017, just imagine how well it would be doing without them.

Next post: How funding health insurance for kids became a political bargaining chip