Warning: Use of undefined constant wp_cumulus_widget - assumed 'wp_cumulus_widget' (this will throw an Error in a future version of PHP) in /home/customer/www/whatifpost.com/public_html/wp-content/plugins/wp-cumulus/wp-cumulus.php on line 375
 Has Congress done anything to screw over ALS patients recently?
≡ Menu

Has Congress done anything to screw over ALS patients recently? 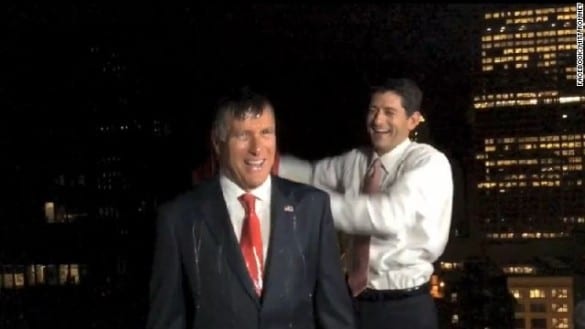 Mitt Romney does the Ice Bucket Challenge with some help from Paul Ryan. We should point out that their proposed budget would have meant huge cuts to health research.

Glad you asked. In 2010, the National Institutes of Health (NIH) devoted $59 million towards ALS research– by 2013, that figure had dropped to $39 million. So what happened?

A couple of things:

1. The stimulus expired. Republicans have mocked the stimulus as wasteful and ineffective (although they took credit for its effects back home in their districts), but, aside from creating jobs and helping keep the economy afloat after the financial crisis, it poured a bunch of money into scientific research. The NIH received an extra $10 billion in stimulus funds for research and new health facilities, and $12 million of that went to ALS research.

2. The sequester. Even without the stimulus, the NIH still had $8 million more in its budget four years ago. The second big cut since then was the sequester, which was triggered when Congress couldn’t reach a budget agreement a couple years ago. The part of the sequester that Republicans supported was a big across-the-board cut in discretionary spending. However, as we pointed out last year, that cut to discretionary spending included health research– the NIH lost 5% of its funding, and had to award 700 fewer research grants in 2013. Some of that funding was restored in a 2014 budget agreement, but only a small portion of it: for example, ALS research funding was increased by just $1 million, $4 million short of its pre-sequestration levels.

Health researchers say that the one-time bump in funding from something like the ice-bucket challenge is fine, but what they really need is the long-term, consistent funding that only the federal government can provide. Dr. Jonathan Serody, a researcher at the University of North Carolina, tells NBC News:

“If a million people would donate $100 a year for 30 to 40 years, you might get a breakthrough for ALS. These flash-in-the pan things that will go away after a few months will not help ALS in the long run. Researchers need dependable money.”

The problem is that private donations pale in comparison to federal funding. For example, in 2007 NIH paid out $30 billion in medical research, compared with $5 billion raised by private foundations and donors. Yet, federal funding for medical research has been dropping since even before the sequester: the NIH says that when you account for medical inflation, its budget has been cut by 22% over the past decade.

Which means, as Francis Collins, director of the NIH told NBC News:

“Right now we are leaving about half of the good ideas on the table for lack of resources.” Only 16 percent of applications get funded, compared to 30 percent 10 years ago.

Yet, the ice bucket challenge might still help. The donations are great, but what would be even better is if the awareness generated by the campaign led to more federal funding for research into ALS… and other diseases that are just as deadly.