Warning: Use of undefined constant wp_cumulus_widget - assumed 'wp_cumulus_widget' (this will throw an Error in a future version of PHP) in /home/customer/www/whatifpost.com/public_html/wp-content/plugins/wp-cumulus/wp-cumulus.php on line 375
 Wisconsin’s governor’s Medicaid plan will spend more to get less
≡ Menu 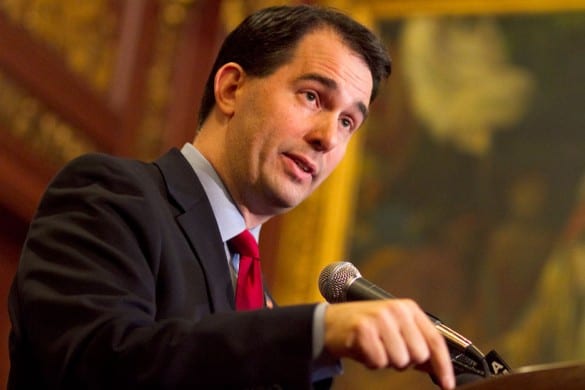 Wisconsin governor Scott Walker is a lucky guy. Other conservative governors have had to choose between (1) appeasing the tea party and rejecting Obamacare’s Medicaid expansion or (2) doing the responsible thing by accepting federal funds to provide health coverage to millions of low income Americans. Ohio’s John Kasich and Rick Scott of Florida went with option two, while Pennsylvania Governor Tom Corbett has (at least for now) chosen the tea party route.

Walker doesn’t have to choose. Thanks to a unique situation in Wisconsin, he can opt out of the Medicaid expansion yet still extend coverage to nearly as many Wisconsinites as if he’d opted in. Forbes blogger Avik Roy, a healthcare adviser to the Romney campaign, is calling Walker’s plan “a model for the nation.” It’s not though. In fact, it’s not even a good deal for Wisconsin.

Currently most states provide Medicaid coverage only to certain groups, like pregnant women, the disabled, and kids. The Affordable Care Act says the program will now cover anyone making less than 138% of the federal poverty line (FPL), at least in states that choose to expand.

Wisconsin, though, is different. It’s one of a handful of states that already provides Medicaid to anyone making less than 138% of FPL– in fact, in Wisconsin anyone making less than 200% of the poverty line is eligible. They get a more limited benefit package than traditional Medicaid enrollees, and there’s been a cap on enrollment since 2009 so not everyone who is eligible actually gets coverage, but, for the most part, Wisconsin has been complying with Obamacare’s Medicaid expansion for years.

Doing things this way won’t cover as many people as simply expanding Medicaid, but it’s close: under Walker’s plan 224,520 Wisconsinites will gain coverage, compared to 252,678 if the state simply expands Medicaid.

With this approach, Wisconsin will miss out on one of the most appealing features of the Affordable Care Act: the federal government footing the entire bill for Medicaid enrollees newly eligible under the health reform law.

Wisconsin will instead receive its regular match, with the federal government paying 60 percent of the Medicaid program and the state financing 40 percent. As to why a 60 percent match is better than the federal government paying the entire bill, spokesman Cullen Werwie says that Walker expects that enticing match will ultimately get cut back and that could leave Wisconsin on the hook for a bigger chunk of the Medicaid bill than it ever expected.

What Walker’s spokesman fails to mention is that (1) the federal government has never substantially cut Medicaid funding; and (2) even if they did, Wisconsin could always opt out at a later date.

Instead, Walker’s taking a considerably more expensive approach. The nonpartisan Kaiser Family Foundation estimates that by expanding Medicaid, Wisconsin would save almost $500 million over the next ten years. Walker’s plan calls for a $644 million increase in Medicaid spending… and that’s just to cover the costs from 2013-2015.

2. It will cost Wisconsin businesses tens of millions of dollars

A national study by Jackson Hewitt Tax Service Inc. estimates that Walker’s plan could leave Wisconsin employers with federal penalties of between $24.1 million and $36.1 million a year. The Milwaukee Journal-Sentinel explains:

Employers with the equivalent of 50 or more full-time workers would pay a tax of between $2,000 and $3,000 per employee for anyone who receives a taxpayer subsidy to be covered under the federal health exchange. In Wisconsin, that would work out to just over 12,000 people, Jackson Hewitt estimated.

Medicaid provides a range of benefits that lower-tier private health plans — which are the only kind that poor Americans will be able to afford under Walker’s plan — don’t cover. As Harold Pollack wrotefor The Incidental Economist, “There is no genuine private-sector equivalent for many Medicaid services provided to disabled individuals with special needs.” Those services include specialized benefits such as home care and social worker visits to assist impoverished first-time moms — benefits that might not be necessary for well-positioned Americans who may opt for a lower-cost health plan, but make an enormous difference to low-income populations with unique needs.

Even some of Walker’s own party apparently have concerns with Walker’s plan. Democratic state Senator Jon Erpenbach told the Associated Press that he’s spoken with some Senate Republicans about possibly circumventing the governor and accepting the Medicaid expansion, at least temporarily.

As for why Governor Walker is opting for a plan that will cost the state more money to cover fewer people, Erpenbach might have an answer:

Previous post: Why is Pennsylvania’s governor turning down the Medicaid expansion?