Warning: Use of undefined constant wp_cumulus_widget - assumed 'wp_cumulus_widget' (this will throw an Error in a future version of PHP) in /home/customer/www/whatifpost.com/public_html/wp-content/plugins/wp-cumulus/wp-cumulus.php on line 375
 Will Pennsylvania’s Medicaid expansion alternative even get approved?
≡ Menu

Will Pennsylvania’s Medicaid expansion alternative even get approved? 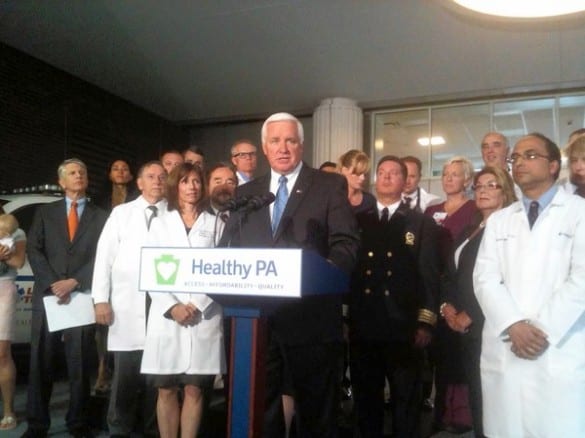 We promise this is the last picture of this guy we’ll show on here for a while.

Ok, one last story that’s not about people losing their minds as the Obamacare exchanges launch tomorrow (we’re looking at you, Congressional Republicans). We’ll have plenty of coverage of that later this week.

But for today, we wanted to follow up on our post on Pennsylvania governor Tom Corbett’s Medicaid plan. Pennsylvania isn’t the first state to propose taking Obamacare’s Medicaid expansion funding and using it to buy private insurance instead. Arkansas applied for a federal waiver to pursue a similar “private option” way back in March, and on Friday Arkansas state officials announced that the Centers for Medicaid and Medicare Services (CMS) had approved their waiver request. That would seem to bode well for Corbett’s privatization proposal– he’ll also need a federal waiver to privatize Medicaid– however, there are some important differences that make approval in Pennsylvania much less certain.

If anything sinks Corbett’s plan, it will probably be his insistence that Medicaid in Pennsylvania has to include a work requirement. For one, federal health officials already rejected a similar proposal from Utah in 2012, which tried to mandate eight hours of community service per month as a condition of staying on Medicaid.

But even if CMS wanted to approve Pennsylvania’s work requirement– although there are plenty of reasons why it’s a bad idea– they can’t, says Joan Alker, executive director of the Center for Children and Families at Georgetown University:

“It’s unlawful to tie Medicaid eligibility to work requirements. The federal government, not only do I think they will not grant that, they can’t.”

Arkansas showed their plan would be budget neutral

Another requirement for Medicaid waivers is that states have to show that their alternative plan will be “budget neutral”– in other words, that it costs as much or less than the traditional Medicaid program. That’s really hard to do; Medicaid has much lower administrative costs and much lower reimbursement rates than private insurance plans.

Arkansas thinks that competition on the exchanges and savings from reduced churning (see our last post for an explanation of churning) could bring insurance premiums down to Medicaid levels, and CMS agreed, approving their waiver. However, Pennsylvania’s Medicaid costs and the demographics of its low income population are pretty different– just because Arkansas could show that private insurance might cost the same as Medicaid doesn’t mean that Pennsylvania will be able to as well.

Another important thing about these waivers is that they’re temporary– they expire in 2017, and if it turns out that privatized Medicaid does in fact cost more, the waivers won’t be renewed.

[Technically there’s a way Pennsylvania can expand Medicaid through private coverage without a waiver– the details are super wonky, and you can read more about it here if you’d like. However, based on Corbett’s description of his plan, it sounds like he would have to apply for the waiver.]

It’s not so much the fact that Pennsylvania’s plan includes premiums that could get it in trouble– as of 2013, 40 states charged premiums for at least some Medicaid beneficiaries. The problem is that Corbett’s proposal seems to clash with federal regulations about who can be charged premiums, and how much.

Arkansas is months ahead of Pennsylvania in the process

Arkansas will be able to implement its private Medicaid option this year, because it applied for its waiver months ago. The approval process takes a while, and Corbett is coming to it very late in the game.

According to Richard Weishaupt, Senior Attorney with Community Legal Services, who spoke at the Pennsylvania Health Access Network conference in Harrisburg last week, goes like this:

Meanwhile, the approval process for Pennsylvania to opt into the standard Obamacare Medicaid expansion goes more or less like this:

And that’s it– the state could start enrolling people in Medicaid this week, for coverage starting January 1.

Instead, under Corbett’s plan, coverage likely won’t start until January 2015 at the earliest… and that’s if it gets approved. So far Corbett has refused to answer questions about what he’d do in the likely event that the feds reject key parts of his plan (like the work requirement). That basically means we still have no idea if he’s actually planning to expand coverage to low-income residents, or if it’s just an election year delay to make it look like he’s doing something.

Next post: How the government shutdown is affecting America’s health

Previous post: What the “actuarial value” of an insurance plan means (and why you should ignore it)