Warning: Use of undefined constant wp_cumulus_widget - assumed 'wp_cumulus_widget' (this will throw an Error in a future version of PHP) in /home/customer/www/whatifpost.com/public_html/wp-content/plugins/wp-cumulus/wp-cumulus.php on line 375
 Will NYC’s proposed soda rule work?
≡ Menu

In our last post we looked at why New York City mayor Michael Bloomberg and other public health advocates are trying to reduce soda consumption. Today we’ll look at how they propose to do it.

First, there’s one thing we need to clear up. We think that maybe people are getting a little confused by the word “ban,” and are apparently under the impression that Bloomberg is trying to outlaw soda, or at least the consumption of more than 16 ounces of it. And so we saw even smart people comparing the drink size restrictions to book banning, Prohibition, and even the Spanish Inquisition.

So to clarify: no one is saying that New Yorkers can’t drink more than 16 ounces of soda. They’ll just have to buy it in… two cups:

The idea behind the rule isn’t to outlaw soda, it’s to get people to drink less of it by reining in giant portion sizes, which have grown exponentially in the past few decades:

Until the 1950s, the only size you could get a bottled coke was 6.5 ounces, half the size of a 12-ounce can, a third of a 20 ounce bottle and tenth of a half-liter. The largest size you could get in the ’50s was 26 ounces, but this was seen as a family size – an alternative to bringing home a six-pack of the little bottles. Now[…] it’s about a single serving. 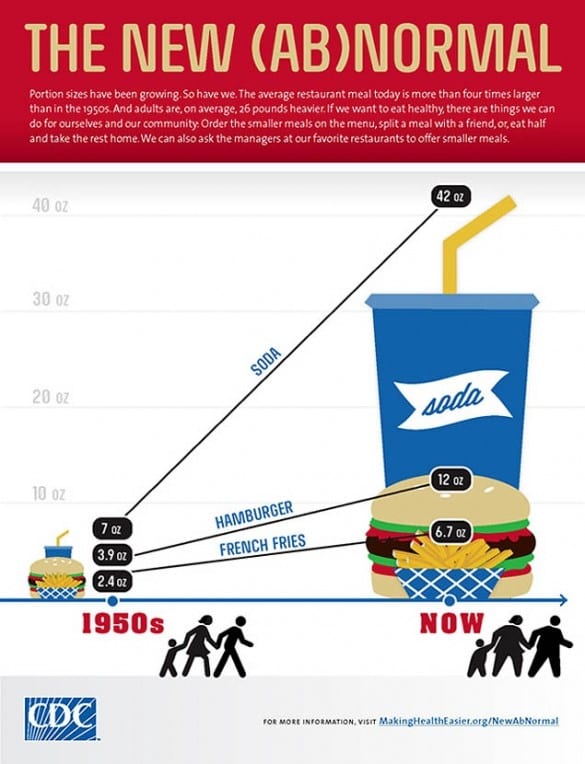 Why does it matter that soda sizes have crept up? Research has consistently shown that portion size affects how much we eat:

In one well-known experiment, Philadelphia moviegoers were given either a medium or large bucket of stale, two-week old popcorn. Those with the large bucket ate 33.6 percent more popcorn, despite the fact it tasted pretty awful. When the package size of a snack food is doubled, calories consumed tend to go up by about a third.

“The more general explanation of why large packages and portions increase consumption may be that they suggest larger consumption norms,” writes Cornell University’s Brian Wansink, who has pioneered much of the research on food portion size. “They implicitly suggest what might be construed as a “normal” or ‘appropriate’ amount to consume.”

And so in New York, if you really want to get two 16-ounce drinks– heck if you want to guzzle four of ’em– then go ahead. But the hope is that when presented with two drinks, instead of one single serving bucket, most people will decide they don’t actually want all that extra soda.

The researchers who did the popcorn study, Cornell economics professors Brian Wansink and David Just, don’t think the ban will work. They say that their research only shows what happens when you give people larger or smaller portions in a dining or party setting, where they’re unlikely to notice portion size. They write, “It’s exactly because participants weren’t paying attention that we go the results we did.”

According to Wansink and Just, when people buy soda they are paying attention, which is why restaurants offer a choice of sizes. People who want a little get a little, and people who want a lot find a way to get it:

One hundred and fifty years of research in food economics tells us, “People get what they want.” Someone who buys a 32-ounce soft drink wants a 32-ounce soft drink and will find a way to work around the ban. They’ll go to a place that offers fountain refills, or they’ll buy two. If they don’t have much money, they might cut back on fruits or vegetables or a bit of their family meal budget.

We’re not sure if people are in fact getting exactly as much soda as they want though.

Why we drink so much

Soda sizes didn’t creep up simply because customers suddenly decided they wanted more– it was the result of a deliberate effort by beverage companies to get us drinking as much soda as possible. One former Coca-Cola executive, Todd Putman (who now says, “I have a karmic debt to pay for the number of Cokes I sold across this country”), described the strategy to the Washington Post:

For all the range and reach of Coke’s marketing operation, Putman said he quickly learned it was built around one goal: per capita consumption. “How can we drive more ounces into more bodies more often?”

The term of art among company executives was one Putman had never heard before: “share of stomach.”

Putman embraced the challenge with gusto. In the interview, he recalled giving a presentation in which he showed a chart illustrating how consumption of milk had dropped over time while consumption of a sugary soda — he can no longer remember which product — had risen.

When he pointed to the place where the two lines crossed — the moment in which soda surpassed milk — Putman remembers swelling with pride.

“I did not have any reaction beyond, ‘We are winning,’ ” he said. “It’s shocking to me now. But it was not shocking to me then in any way, shape or form. . . . We were really uninformed relative to the health issues.”

These companies got us drinking more partly with clever marketing, but also with clever pricing. For example, smaller sizes, like Coke’s new 7.5 ounce cans are much more expensive. And usually there’s only a marginal price increase for a serious increase in portion size. If you go to the movie theater and a “small” soda is say $3.75, the next size up is often twice as much soda for only 50 cents or so more.

A commenter on Aaron Carroll’s Incidental Economist blog talked about his own experience with a similar product:

When I was in high-school I worked at a Cold Stone, and whenever a customer would order a “like-it” (small, 5oz i think) size we were told to cheerfully inform them that for 40cents more they could get almost double the ice-cream! (love-it, medium size, about 8oz).

This mechanism worked more often than not. (Actually, if you want to know something really insidious, they would track our sales to see your ratio of medium to small cups sold, and those with the highest ratios would get bonuses….)

People often purchase more than they actually want simply because it seems like a better deal. They might not consume the entire 8-ounces of ice cream or 44-ounces of Coke, but they’ll certainly end up eating more than if they bought the smaller size.

The stakes are high

That said, we do agree with part of their conclusion: if the “ban” doesn’t succeed it could set back future efforts to deal with soda and obesity:

Consider the McLean Effect. McDonald’s launches the visible and controversial low-calorie hamburger. It failed, becoming a byword for restaurants for the next 15 years. No one would dare introduce low-calorie fast-food offerings because “Look what happened to the McLean.”

Banning larger sizes is a visible and controversial idea. If it fails, no one will trust that the next big—and perhaps better—idea will work because “Look what happened in New York City.” It poisons the water for ideas that may have more potential.

We actually don’t think the law will “fail”– we think it will reduce soda consumption in NYC, which will help push down obesity rates somewhat. However, the law is so controversial that in order to be judged a success, it may have to achieve big results quickly, which is unlikely.

For one, it may not go far enough to make an impact. Convenience stores like 7-11 are exempt, meaning those 50-ounce Big Gulps in the Ellen video clip aren’t going anywhere. And restaurants can still offer free refills, so the portion size in many places is still basically unlimited. Also, some people who do reduce their soda consumption may simply replace those calories by drinking more of other beverages.

The difference between this rule, and the mayor’s other controversial health proposals is uncertainty. The effects of banning all smoking and all trans-fats in restaurants is more obvious to predict than the effect of banning some soda sizes in some locations. While we definitely think soda is a problem, something like a steep soda tax may be as effective and less controversial.

Still it will be interesting to see how the new rule works out. In a city where 20% of schoolchildren are obese, we hope it’s successful.

Next post: What to expect when the Supreme Court rules on health care