Warning: Use of undefined constant wp_cumulus_widget - assumed 'wp_cumulus_widget' (this will throw an Error in a future version of PHP) in /home/customer/www/whatifpost.com/public_html/wp-content/plugins/wp-cumulus/wp-cumulus.php on line 375
 Will “Empowering States to Innovate” empower single payer?
≡ Menu 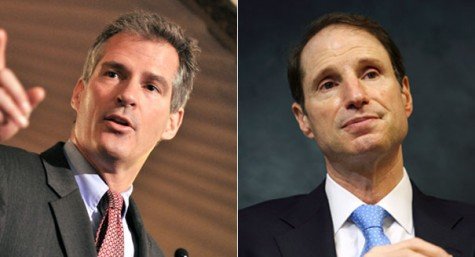 Lately, if you hear a member of Congress talk about making changes to health reform, it’s almost always a conservative Republican who wants to repeal it or block funding or otherwise dismantle the whole thing. Which is why it’s so refreshing that a bipartisan pair of Senators has introduced a bill that may actually improve the new law.  Not only that, but Republicans may support it.

The provision in question allows states to opt out of the new law, if they come up with their own health reform plan that meets certain conditions.  Ezra Klein explains how it works:

If a state can think of a plan that

Wyden, with the help of Sen. Bernie Sanders (I-Vt.), was able to build a version of this exemption into the original health-care reform bill, but for various reasons, was forced to accept a starting date of 2017 — three years after the Patient Protection and Affordable Care Act goes into effect. The Wyden/Brown legislation would allow states to propose their alternatives now and start implementing them in 2014, rather than wasting time and money setting up a federal structure that they don’t plan to use.

At first it sounds like an idea that would appeal most to Republicans, especially with conservative state governors and legislatures vowing to fight “Obamacare,” this would give them an opportunity to develop their own alternatives.  But it’s actually the more liberal states that are in the best position to take advantage of this bill.

An opening for single payer?
For all the complaining that Republican leaders have done about health reform, they’ve done little to develop workable alternatives.  But some liberal states have already taken steps towards health reform that would go further than the Affordable Care Act.

With so much attention on the Republicans’ gains in the recent midterm elections, it was easy to miss the fact that it was a big night for single payer advocates.   In Vermont, the newly elected governor campaigned on single payer, and the state legislature has already passed a bill creating a commission to design a single payer health care system in the state.

California’s state legislature has passed a single-payer bill twice– once in 2006 and again in 2008– but both times it was vetoed by Republican governator Arnold Schwarzenegger.  Democrats plan to introduce the bill again January 2011, and this time the governor will be Democrat Jerry Brown, who hasn’t said for sure whether he’ll sign, but it seems likely– after all he was in favor of single payer when he ran for president in 1992.

If Vermont or California does create a single-payer system, the Empowering States to Innovate Act would allow them to implement it as soon as 2014, using money they would have received from the new health reform law.

Ezra Klein points out that conservatives hate single payer even more than the Affordable Care Act.  But, he says:

More hurdles
Even if the Empowering States to Innovate Act passes there are still some issues facing single payer in both states.

In California, state law requires a two-thirds majority to pass any new taxes or fees.  There’s enough support in the legislature to pass single payer, but not the super majority required to pay for it.  So if Jerry Brown does sign the single payer bill, single payer activists will have to get a ballot initiative passed– and defeat the inevitable counter ballot initiative from the insurance industry.

“It will be the mother of all initiatives. I’m convinced the insurance industry will spend more money to defeat single payer in California than Obama spent to win the Presidency.”

Meanwhile, Vermont would have an easier time paying for single payer, but it might run into legal issues with federal law.  The 1974 Employee Retirement Income Security Act (ERISA) prevents states from enacting legislation “relating to” employee benefit plans.  It was intended to allow big companies to set up plans with uniform benefits across the country, rather than navigate individual state requirements.  The intention of the Act was to protect workers’ pensions and health benefits, but in the past, this law has been used to challenge state attempts to expand health coverage.

For example, Maryland passed a law in 2006 stating that employers with more than 10,000 employees had to spend at least 8% of their payrolls on health insurance.  Basically it was an attempt to make Walmart provide health insurance for its employees, instead of forcing them to rely on Medicaid and other state programs.  A federal appeals court found that the law directly violated ERISA, and overturned it.

The waivers allowing states to opt out of health reform if they come up with a better program don’t apply to ERISA.   A state would need a bunch of waivers to enact single payer, and coordinate all the funds that normally would go to Medicare, Medicaid, Indian Health Services, etc.   Under the new law, the Secretary of Health and Human Services can grant all of them except ERISA, because that’s under the jurisdiction of the Labor Department.  Congressman Dennis Kucinich (D-Ohio) tried to get automatic ERISA waivers for states who pass single payer, but that provision didn’t make it into the final bill.

Still, a single payer system should be able to get around ERISA challenges more easily than other types of health reform.  Since a single payer system wouldn’t require employers to provide insurance or specific benefits, it would have a better chance of being upheld.  The issue would almost certainly go to the courts, but the state would have a strong case in its defense.  Another option would be to get Congress to grant the state a waiver from the ERISA rules

In any event, single payer on the state level still has a ways to go– but thanks to the recent elections it’s closer now than ever before.

It’s important to remember that while Vermont and California might pursue single payer, thanks to the Empowering States to Innovate Act, more conservative states could pursue health savings accounts or something else.   In a way, the bill makes states laboratories for testing which type of health reform works best– but instead of the crummy status quo as the baseline, states will have to do better than the Affordable Care Act, with its higher standards for access and lower costs.  As Sen. Bernie Sanders explains:

We believe Vermont stands a chance to be the first state in the nation to pass single-payer. The governor-elect campaigned on it, and we have support in the House and Senate. We’re not asking for one nickel more than we’d otherwise get. The other thing we think we have an opportunity to do is reach out to our conservative friends and say, hey, Vermont wants to go forward with a single-payer system, and Mississippi and Alabama don’t, but maybe they have other ideas. Now, we’re conscious of the need to make sure that the health-care reform bill’s standards aren’t diminished. So everyone needs to provide the same quality of health care as the bill provides and at the same, or lower, price. But if they can do that, then they should be able to go for it.

Previous post: What do the midterm results mean for health reform?