Why the Medicaid expansion is a good deal for states, in 3 charts

In our last post, we pointed out that much of health reform is now in the hands of the states. And the biggest decision facing states is whether or not to participate in the new law’s Medicaid expansion– roughly 15 million people are expected to gain coverage through this provision. Some states have already claimed that the the expansion is too pricey and are opting out. However, a new study from the nonpartisan Kaiser Family Foundation finds that the expansion won’t cost states much more than they’re spending now.

There are a couple things you need to know to make sense of the Kaiser study. First, remember that Medicaid is administered by the states, under federal guidelines. Currently those guidelines guarantee coverage only to certain categories of poor people (pregnant women and the disabled, for example), but some states have expanded eligibility to cover more people. Also, remember that the program is jointly funded by the federal and state governments, with the federal government kicking in between 50% and 73% of the cost, depending on the state.

Starting in 2014, the Affordable Care Act expands Medicaid to cover anyone making less than 133% of the poverty line. To avoid placing an unreasonable burden on state budgets, the new law says that the feds will cover 100% of costs for anyone who wasn’t eligible under the old rules, and eventually that amount will phase down to 90% after 2020.

Congress assumed that every state would participate, because if they didn’t go along with the Medicaid expansion, they could risk losing ALL of their federal Medicaid funding. The Supreme Court, however, said that was unfairly coercive, and instead states could choose whether or not to participate in the expansion, without jeopardizing all of their Medicaid funding.

Several states have opted out, claiming that even with the federal government paying for the vast majority of the expansion, they still can’t afford it. The Kaiser study, however, provides some information that could make them reconsider.

1. Most state Medicaid costs under Obamacare don’t come from the expansion 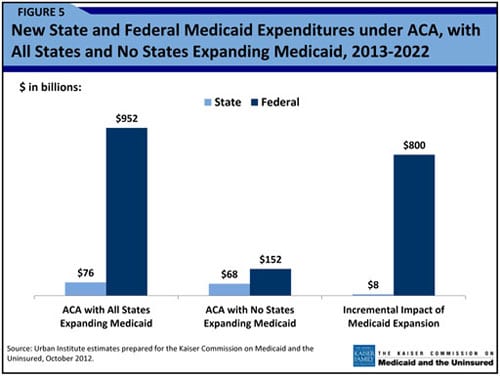 Where does the other $68 billion come from then? Much of it is from what health policy experts call the “woodwork effect.”  There are millions of people who are eligible for Medicaid right now, who don’t know it. Starting in 2014, many of them will “come out of the woodwork”– they’ll log onto the new health care exchanges, discover that they’re eligible for Medicaid, and sign up. However, the federal government is only covering 100% of costs for people who are newly eligible under Obamacare. For the “woodwork” folk who were already eligible before health reform, the federal government will only reimburse states at the old, much lower rate.

2. The cost of expanding Medicaid will be a very small part of state budgets 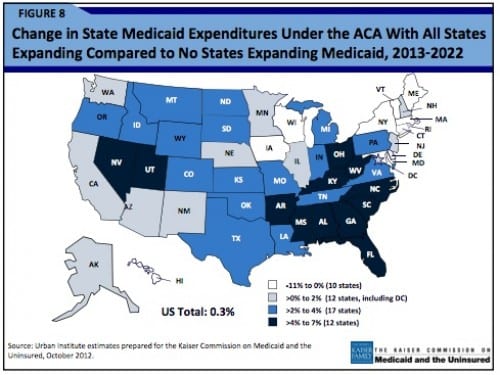 The study finds that the $8 billion cost of expanding Medicaid is only a 0.3% increase in total state Medicaid spending. Now, to be fair, that’s just an average– there’s wide variation between states. According to Kaiser Health News:

Ten states, including New York and Iowa, would see Medicaid spending fall during that time-frame because they already provide broad eligibility and would benefit from higher federal funding. Likewise, a dozen states, half of them in the southeast, would see state Medicaid spending increase by between 4 and 7 percent through 2022 because their eligibility levels are currently more stringent than under the health law.

However, even in states like North Carolina and Florida, which are expected to see the biggest increases in state spending, the Medicaid expansion is projected to be just 1% of their total budgets, after savings from uncompensated care included. Speaking of which…

3. The decrease in spending on uncompensated care will more than make up for the cost of expanding Medicaid 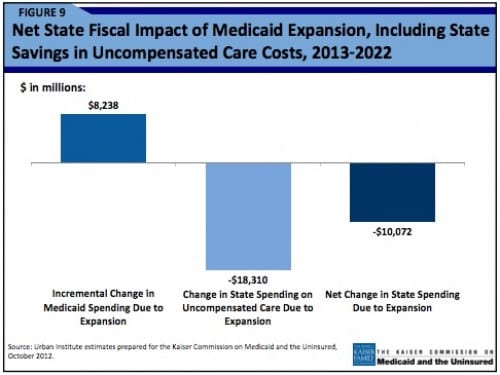 In other words, the Kaiser study reaffirms what health reform supporters have said since the beginning: the Medicaid expansion is a really good deal for states.

Next post: Checking in on the fiscal cliff negotiations (and what they could mean for healthcare)