Warning: Use of undefined constant wp_cumulus_widget - assumed 'wp_cumulus_widget' (this will throw an Error in a future version of PHP) in /home/customer/www/whatifpost.com/public_html/wp-content/plugins/wp-cumulus/wp-cumulus.php on line 375
 Why is Pennsylvania’s governor turning down the Medicaid expansion?
≡ Menu

Why is Pennsylvania’s governor turning down the Medicaid expansion? 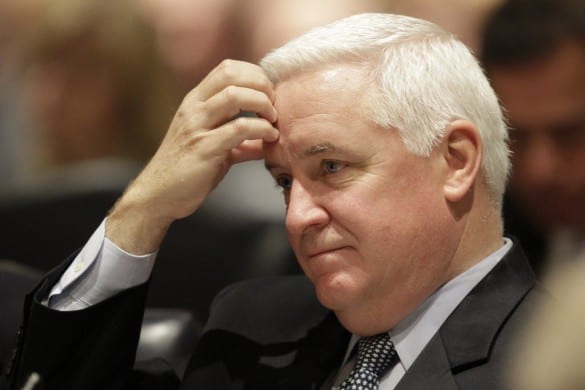 Lately Republican governors across the country have announced that they will support the new law’s Medicaid expansion– even diehard conservatives like Florida’s Rick Scott to Arizona’s Jan Brewer are now on board. One notable exception was Pennsylvania’s Republican governor Tom Corbett, who in his budget address said he “can’t recommend it at this time.” But after looking at the facts, we don’t understand why.

The consequences of not expanding

Over 500,000 residents will be left without insurance: According to an analysis by the Urban Institute, 1.3 million Pennsylvanians are uninsured, and roughly half of them would now be eligible for Medicaid under the new law. If Pennsylvania opts out, some of those people can get subsidies to help purchase insurance on the exchanges (those making between 100% and 133% of the poverty line). However, the vast majority of those who would have been covered by Medicaid– 542,000 Pennsylvanians– would now be out of luck.

In the beginning, it will cost Pennsylvania more NOT to expand: For the first few years of the Medicaid expansion, Pennsylvania will actually save money. The federal government is paying for the entire cost of the expansion from 2014 to 2016. The state is chipping in some money after that, but when you factor in savings from things like uncompensated care and certain limited benefits the state currently pays for, Pennsylvania is expected to save between $2.7 and $3.5 billion through 2019.

Every year after 2019, the federal government will pick up 90% of the cost for these new Medicaid enrollees… but that’s still a great deal for Pennsylvania (for current enrollees, the feds only pay 54% of the costs).

A missed opportunity to create tens of thousands of jobs: The advocacy group Families USA hired Regional Economic Model Inc. (REMI) to look at what impact this infusion of federal money would have on the state’s economy. They found that in 2016, the extra federal Medicaid spending will support 41,200 new jobs in Pennsylvania. And not just in healthcare, thanks to what’s known as the “multiplier effect.” The report from Families USA explains:

For example, a hospital may spend a portion of its revenue on facility upgrades that employ large numbers of local construction workers. Similarly, health sector employees will spend their income on all kinds of products and services, such as dining at local restaurants or purchasing new cars. This, in turn, increases the earnings of local restaurants or car dealerships, which adds to the income of the employees in those businesses, and so on.

Hospitals will lose funding: In 2011, Pennsylvania’s hospitals provided nearly a billion dollars in uncompensated; to help offset the cost, many receive “disproportionate hospital share” (DSH) payments from the federal government. Pennsylvania ranks sixth in the nation for DSH collection, receiving $562 million in 2011. The Affordable Care Act cuts these payments by 75%; the thinking was that if nearly patient has coverage hospitals won’t need them. But if hundreds of thousands of Pennsylvanians still lack insurance? They’ll be taking a big financial hit.

Now we have to say, after reading Steve Brill’s Time magazine piece about the ridiculous amount of money even non-profits bring in, we don’t have a ton of sympathy for the hospital industry taking a pay cut. However, the vast majority of hospitals that receive DSH payments are struggling safety-net hospitals serving the poor and uninsured. Also, that multiplier effect we mentioned earlier goes both ways– taking away those federal funds could hurt the rest of the state’s economy as well.

The governor’s reasons not to expand

Ok, so if you’re planning to leave hundreds of thousands of Pennsylvanians without coverage, turn down the creation of thousands of new jobs, and slash funding to safety-net hospitals, all while spending more on health care over the next six years, you should have some pretty good reasons. However, Corbett’s arguments against expansion leave something to be desired.

1. “I need to know exactly what the rules are going to be.”
Governor Corbett says he still has a number of questions for the feds, but hasn’t elaborated on what those questions are. (Back in August, Corbett’s Secretary of Public Welfare Gary Alexander sent a list of 21 questions to Health and Human Services, and reported in December that he had answers to all but six of them– as for which six, who knows.) Corbett is meeting with HHS Secretary Kathleen Sebelius later this month, so hopefully he’ll finally get his answers. We’d love to know what information he’s missing though, especially given that the governors of nearly every state bordering Pennsylvania– including two Republicans– have already decided to support expansion.

2. “It would be financially unsustainable for Pennsylvania taxpayers.”
Corbett seems to be stretching the numbers a bit. According to his administration, the Medicaid expansion will cost $4.1 billion over the next ten years, but they won’t say how they got that figure. That’s more than double the estimate from the nonpartisan Kaiser Family Foundation, which says that, when savings from uncompensated care are factored in, expansion will cost PA less than $2 billion. That ‘s a 1.4% increase in state Medicaid spending over the next decade (a %0.5 increase in the total state budget)… to cover half a million additional people.

3. “The federal government has a track record of not keeping promises.”
Historically this hasn’t been the case. In an article titled “There’s No Precedent for Feds Dialing Back Medicaid Dollars,” Washington Post reporter Sarah Kliff cites a graph from a 2012 report to Congress showing… that there’s no precedent for the feds dialing back Medicaid dollars: 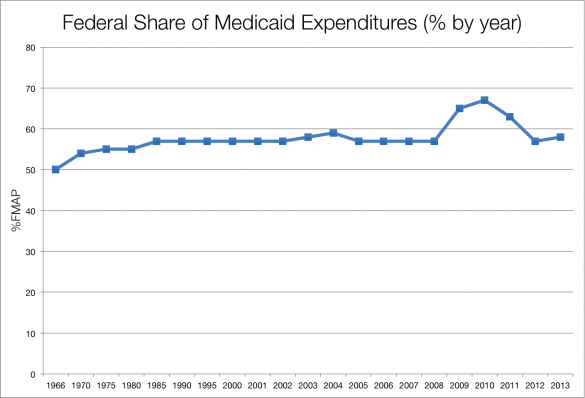 As Project Millennial’s Adrianna McIntyre (who found the graph) writes:

Turns out that since Medicaid was passed in 1965, average funding levels have remained flat. [That brief bump from 2008 to 2011 was from the stimulus, a temporary measure meant to help states during the financial crisis.]

4. “It’s not free money”
While the federal share of the Medicaid expansion is paid for with federal tax money, by law those taxes are going to be collected regardless of what the state decides. If Pennsylvania opts out of the expansion, it simply means that money from Pennsylvania taxpayers will go to states that do participate in the expansion. Other conservative Republican governors (like Arizona’s Jan Brewer) have said that’s why they support the expansion in their own states.

Also, it’s worth noting just who’s paying here. Taxes for Obamacare come from people making more than $200,000 a year, people with ultra-expensive “Cadillac” insurance plans, drug and insurance companies, and a few other smaller taxes that, again, affect mainly the wealthy and big corporations. (Check out our post on Paying for Health Reform for the full list.)

5. Pennsylvania needs “true flexibility” and not a “one-size fits all mandate from Washington.”
These statements come from a letter the governor sent to Secretary Sebelius shortly after his budget address. Our question is, “Flexibility to do what exactly?” Corbett has made some generic statements about “consumer choice” and “individual responsibility” in reforming Medicaid, but he has yet to make specific proposals. And as the Washington Post’s Sarah Kliff points out, states that do have their own ideas for reforming the program, can usually get waivers for federal rules that get in the way:

It’s hard to say that the Obama administration has stonewalled state efforts to shape their Medicaid programs. Of the 458 Medicaid waivers currently in operation, 350 of them were either created or modified within the past two years. The Government Accountability Office has actually argued, in repeated reports, that the federal government does not scrutinize closely enough the Medicaid waiver requests it receives.

The Obama administration’s willingness to approve unique Medicaid schemes in Arkansas and Florida shows there is plenty of flexibility within the current system. Ezra Klein explains further:

The truth is there’s been a tremendous amount of experimentation in Medicaid over recent decades. Indiana converted its Medicaid program into health savings accounts. Tennessee based its program around managed care. Massachusetts folded its Medicaid money into Mitt Romney’s health-care reforms. Oregon tried to rank treatments by value. Some of these reforms have worked well and some haven’t worked at all, but none have solved the basic problem that covering the sick and disabled costs money, and you can’t get around that by trying to redesign their insurance packages.

Corbett seems to have it exactly backwards. It costs money cover Pennsylvania’s poorest residents, yet in the name of “flexibility” he’s threatening to turn down the funding that would solve this basic problem.

Next post: Wisconsin’s governor’s Medicaid plan will spend more to get less