Warning: Use of undefined constant wp_cumulus_widget - assumed 'wp_cumulus_widget' (this will throw an Error in a future version of PHP) in /home/customer/www/whatifpost.com/public_html/wp-content/plugins/wp-cumulus/wp-cumulus.php on line 375
 Who broke the Obamacare marketplaces? Part 1: The Republican opposition
≡ Menu

Who broke the Obamacare marketplaces? Part 1: The Republican opposition 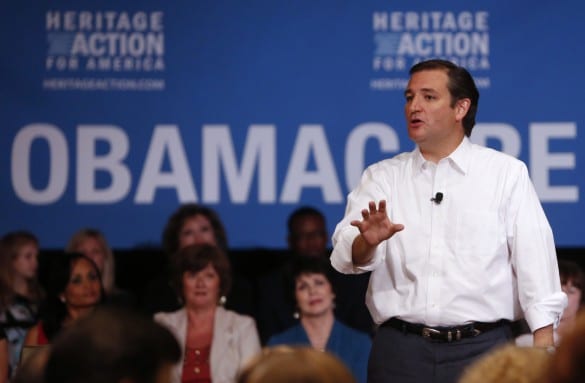 As the health officials scramble to address the issues in Obamacare’s online marketplaces (if you’re curious exactly what went wrong, check out our last post), the big questions now are: Why did things go so wrong? And who’s responsible? This week, we’ll look at the main culprits that have been identified so far: Republican opposition, giant flaws in the way the government handles contracts for big IT projects, and, finally, poor decisions and mismanagement by the Obama administration.

First up: how Republicans helped break the exchanges.

Leaving the feds with a massive job and not enough money

Under the Affordable Care Act, each state was given the choice to either create its own health insurance marketplace or have the federal government do it for them. Regulating insurance has traditionally been the job of the states, and Congress figured that even Republican state legislators would want a say in shaping the exchanges, so it was widely expected that most states would opt to run their own. Instead, Republican governors and legislatures in 34 states refused, leaving the Centers for Medicare and Medicaid Services (CMS), the federal agency responsible for handling the exchanges, with a much bigger job.

Meanwhile, Republicans in Congress have refused to provide extra funding to deal with the enormous workload. Timothy Jost, a health law professor at Washington & Lee University, summarizes the findings of a recent report from the Government Accountability Office (GAO):

This is a massive effort that in better times would have received funding commensurate to the task. As the GAO reports document, HHS has been forced to cobble together funds from a variety of sources […] to come up with a shoestring budget to implement the federal exchanges.

Or as Dr. Donald M. Berwick, the administrator of the federal Centers for Medicare and Medicaid Services in 2010 and 2011, told the New York Times:

“The staff was heroic and dedicated, but we did not have enough money, and we all knew that.”

Restricting funding isn’t the only way Republicans tried to slow work on the exchanges, says Jost:

The leadership of CMS, HHS, and the other federal implementing agencies has been forced to spend hundreds of hours preparing for and testifying at House oversight hearings. These have served no purpose other than to provide a platform for political grandstanding for anti-ACA politicians, but have robbed agency leadership of valuable time that could have been spent directing implementation activities. It is a bitter irony to see the heads of those committees now criticizing those agencies for lagging in implementation efforts.

Congressional Republicans have scheduled more hearings, and on October 30 Health and Human Services Secretary Kathleen Sebelius will answer questions about why the site broke down. But as The New Republic’s Alec MacGillis points out, this leaves House Republicans in kind of a weird spot:

Generally, holding a hearing demanding to know why a new program isn’t functioning better implies that…you want it to function. Until now, Republicans have managed to oppose Obamacare totally, to undermine its implementation left and right while casting symbolic votes for repeal and, just recently, engaging in an immensely costly charade to press for the “defunding” of the law.

But now that the law is actually going into effect, seizing on its deficiencies takes on a different aspect: It means, at some basic level, accepting the goals of the law as worth achieving […] Administration officials will come in for questioning and Republicans will demand to know: How many people are signing up for coverage? When will the site be working better? What are you doing to fix it? Unspoken in all of those questions is something that Republicans have simply shut out of their assault on Obamacare until now: That there are people out there, millions of them, who do not have coverage and will be helped by the law if it can be made to function properly.

It’s worth noting that if the exchanges fail, it could be worse for Republicans than Democrats in the long run. As much as they claim to fear Obamacare, private insurance exchanges were originally a Republican idea and their own healthcare proposals, like Rep. Paul Ryan’s health-care plan and his Medicare plan, would also require the government to run online insurance marketplaces. Arguing that the federal government is incapable of running complicated healthcare marketplaces is arguing against their own ideas.

Liberals, on the other hand, would prefer a government-run, single-payer system (basically Medicare for everyone), that doesn’t require complicated exchanges. And the part of Obamacare closest to that vision– the Medicaid expansion– is going a lot more smoothly.

[UPDATE: Since a number of people commented they were surprised to learn the exchanges were underfunded, we should point out that Jost and Berwick were talking about overall implementation of the exchanges, including things like outreach, building the call centers, etc. However, the administration spent almost $100 million (page 33) building the site itself, and it sounds like more money probably wouldn’t made the site work better, for reasons we explore in Part 2.]

Next post: Who broke the Obamacare exchanges? Part 2: The federal bureaucracy