Warning: Use of undefined constant wp_cumulus_widget - assumed 'wp_cumulus_widget' (this will throw an Error in a future version of PHP) in /home/customer/www/whatifpost.com/public_html/wp-content/plugins/wp-cumulus/wp-cumulus.php on line 375
 Who broke the Obamacare exchanges? Part 3: The Obama administration
≡ Menu

Who broke the Obamacare exchanges? Part 3: The Obama administration 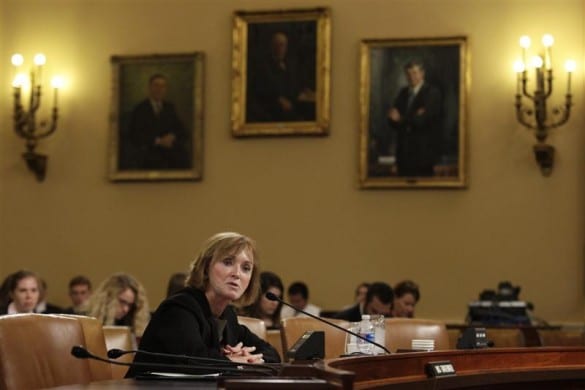 Marilyn Tavenner, administrator of the Centers for Medicare & Medicaid Services, testifies before Congress.

As we mentioned in earlier posts, building the Obamacare marketplace was an incredibly complicated job— one that was made even more difficult by Republican efforts to block its construction and the federal government’s outdated approach to big I.T. projects.

Still, much of the responsibility for the failure of the site rests with the Obama administration, who repeatedly said it would be ready to go by October 1. (This wasn’t a lie– they seemed as surprised as anyone that the site had such serious problems.) Looking back, it’s clear that the administration made a number of management problems and questionable decisions that made the failure of the launch almost inevitable.

1. Putting CMS in charge of the tech team

On big tech projects like healthcare.gov– where 55 different contractors were each responsible for building a part of the site– the government will typically assign a lead contractor, who is responsible for making sure all those pieces fit together. However, for this project, the Centers for Medicare and Medicaid (CMS), made the unusual decision to take on this role itself. According to the New York Times:

Some people intimately involved in the project seriously doubted that the agency had the in-house capability to handle such a mammoth technical task of software engineering while simultaneously supervising 55 contractors. An internal government progress report in September 2011 identified a lack of employees “to manage the multiple activities and contractors happening concurrently” as a “major risk” to the whole project.

Putting CMS in the lead role didn’t necessarily doom the project to failure– as The Washington Post’s Lydia DePillis points out, putting outside contractors in charge of projects can also cause problems– but the fact that CMS seemed blind-sided by the extent of problems with the site, suggests that they weren’t up to the task.

2. Rule-making was behind schedule

While Republican attacks made it harder to build the site, the administration’s response to these attacks made the situation even worse. Since the Affordable Care Act was passed, the Department of Health and Human Services has been issuing rules to explain how the broad guidelines set forth in the new law would work in nitty-gritty detail. However, Timothy Jost, a health law professor at Washington and Lee University, writes:

The Obama administration damaged its own cause by suspending rulemaking activity in the months leading up to the 2012 election. Apparently the administration concluded that it could not risk alienating voters by pushing ahead with ACA implementation during the heart of a reelection campaign, but several months of valuable time were lost as rulemaking languished in the fall of 2012.

“We foresee a train wreck. We don’t have the I.T. specifications. The level of angst in health plans is growing by leaps and bounds. The political people in the administration do not understand how far behind they are.”

The delayed rules were also partly responsible for issues in states that chose to run their own exchanges. Oregon was one of the first states to begin building an insurance exchange, and was well ahead of other states in development, but got stuck waiting for delayed rules from the Obama administration:

Cover Oregon officials echo concerns expressed in interviews earlier this year with insurance executives and former Oregon Insurance Commissioner Lou Savage: Affordable Care Act federal rule changes were finalized by the federal government much later than expected. The result? Oregon’s lead in programming in January 2013 – when the exchange was arguably operational – evaporated as the state had to go back and fill in the blanks thanks to the new federal direction. Those new rules “had a snowball effect” in cascading delays, Lawson said.

3. Not enough time for testing

Thanks to the late regulations and other delays in the development process, there wasn’t much time left to make sure the system actually worked before the launch:

As late as Sept. 26, there had been no tests to determine whether a consumer could complete the process from beginning to end: create an account, determine eligibility for federal subsidies and sign up for a health insurance plan, according to two sources familiar with the project.

People working on the project knew that Oct. 1 was set in stone as a launch date. “We named it the tyranny of the October 1 date,” said a person close to the project.

Testifying before Congress last week, contractors who worked on the project said that the tests suggested that the site could not handle large numbers of users trying to log on at the same time… which of course is exactly what happened.

Also troubling: according to a memo to CMS chief Marilyn Tavenner, website contractors didn’t have time to test all the security controls in a finished version of the system.  The memo said that insufficient testing “exposed a level of uncertainty that can be deemed as a high risk.”

It’s still not totally clear why the White House didn’t just delay the launch given the potential for big problems. The best explanation we’ve seen so far comes from the Times, which says that according to some accounts the project’s managers assured them that any remaining problems could be worked out once the site went live, even though some senior health department officials predicted serious trouble and advised delaying the rollout.

Originally the site was going to have an option where users could browse insurance plans without registering, but at the last minute CMS removed that option from the site. This meant that everyone who went to the site on October 1 had to create an account and complete an application in order to check out insurance prices– creating a bottleneck that overwhelmed the site.

Some Republicans have suggested that there were political reasons for the shift– that the White House was didn’t want people to see the true costs of the plans, so hid them deeper in the site. This speculation goes back to  an unnamed Health and Human Services official quoted in a Wall Street Journal article, saying:

“An HHS spokeswoman said the agency wanted to ensure that users were aware of their eligibility for subsidies that could help pay for coverage, before they started seeing the prices of policies.”

The Republicans’ explanation doesn’t make a ton of sense though. Quotes from insurers were coming in lower than expected– it seems odd that the administration would pull the window-shopping feature to hide these lower premiums (and it was re-added to the site shortly after the launch). In any event, the recent testimony before Congress hasn’t been that helpful in revealing why the last-minute decision was made. A spokesperson for CMS told reporters only that “It was CMS’ business decision not to have window shopping as of Oct. 1.”

The good news is that the administration seems to have gotten its act together somewhat, and they’re saying the site will be working by the end of November.