Warning: Use of undefined constant wp_cumulus_widget - assumed 'wp_cumulus_widget' (this will throw an Error in a future version of PHP) in /home/customer/www/whatifpost.com/public_html/wp-content/plugins/wp-cumulus/wp-cumulus.php on line 375
 White House delays the employer mandate: here’s what that means
≡ Menu

White House delays the employer mandate: here’s what that means 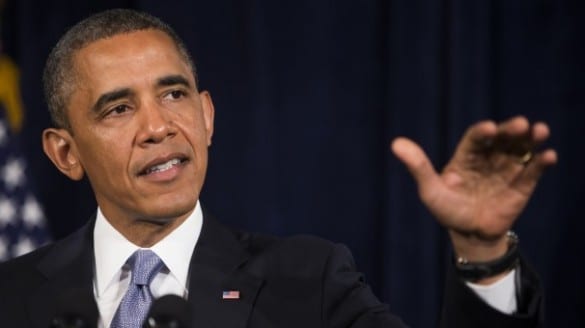 Last week, the Obama administration announced that it was delaying a major part of the new health law, the “employer mandate”– a requirement that large employers provide insurance coverage to full-time workers or pay a penalty. For opponents of Obamacare (and some nervous defenders) it was evidence that the new law really will be a “train wreck,” and some conservatives are complaining that Obama is skirting the law by delaying this provision– a provision they hate, by the way.

Wondering what it really means? Read on.

Why was it included in the Affordable Care Act?

The idea is to keep large employers from dumping employees onto the exchanges, while  raising some money to help pay for health reform.

Right now, around 96% of large employers currently offer insurance to full-time employees. But now that Obamacare provides new coverage options, some large employers may be tempted to drop health benefits (or continue not providing them). If employers don’t offer coverage, it will cost the government money, since anyone making less than $45,000 qualifies for subsidies on the new health exchanges. To prevent this kind of mooching by big businesses, the ACA says they have to offer coverage or pay a penalty.

Why is the White House delaying it a year?

“We have heard the concern that the reporting called for under the law about each worker’s access to and enrollment in health insurance requires new data collection systems and coordination.”

She says delaying the reporting requirements until 2014 will (1) give the administration time to “revamp and simplify” the reporting process, and (2) give employers more time to comply with the new rules. Since the IRS can’t tell if an employer has provided adequate insurance without this reporting, it can’t impose penalties either.

However, some people think there’s more to the White House decision– they may be trying to sidestep some larger structural issues with the employer mandate.

What’s wrong with the employer mandate?

However, for employers with a lot of hourly employees, the employer mandate is a bigger deal. That’s because (1) they’re often in industries that typically don’t provide health coverage (like restaurants) or (2) they do provide coverage to full-time employees, but use a different definition of full-time than the Affordable Care Act. (The ACA defines “full-time” as working 30 or more hours per week, on average, but for many businesses employees working less than 40 hours a week are still considered part-time, and often aren’t offered coverage.)

While it’s hard to feel bad for giant chain restaurants, in many instances the mandate wasn’t incentivizing them to provide coverage– instead they’ve tried to wiggle out of paying the penalty by screwing workers. Some franchisees have said they’ll cut back on hiring to stay under 50 employees, while other larger employers have threatened to cut the hours of existing workers to get them under the 30-hour threshold.

We should point out that it’s not just big corporations either– for example, in Pittsburgh nonprofits like the Carnegie Library and Community College of Allegheny County have said that they plan to cut hours rather than pay the penalty.

Is there a way to fix the employer mandate?

One bill recently introduced in Congress would move the threshold to 40 hours a week, which would probably help a bit since again, most large employers do offer coverage to full-time employees. However, in industries that don’t, the problem of hour cutting would remain.

Another solution would be to structure the mandate differently. Topher Spiro, director of health-care policy at the Center or American Progress told the Washington Post:

“The employer mandate in the House bill was much better constructed from a policy point of view. It was based on the percentage of payroll you spent on health care rather than on how many workers you had, so there’s not this weird disincentive related to part-time workers. But it didn’t have the political support to pass.”

There’s also the question of whether there should even be an employer mandate. One of the few areas where health care experts on both the right and left agree is that our employer-based health system is pretty dumb. Requiring employers to provide healthcare simply reinforces that system.

Is the White House allowed to just delay parts of the law like this?

The entire reason we have a legal system is to sort out ambiguities like this– normally someone would sue and the courts would decide which is the correct interpretation. But in order to sue, you need to have “standing”– in other words, you need to show that you’ve been harmed, or expect to be harmed, by an action. And in the case of the employer mandate delay, that would be tricky, says Nicholas Bagley, a professor of law at the University of Michigan:

Or to shorten that a bit: no harm, no foul.

Is there any downside to delaying the employer mandate?

How big a deal is the delay?

Really, the employer mandate isn’t a key part of Obamacare– and delaying it may even help some. Sure it’s bad press for the White House now, and that $10 billion is nothing to sneeze at, but it also makes implementation of health reform easier. Instead of worrying about how to implement a badly designed provision that’s going to anger both business owners and their employees, the administration can concentrate on the most important part of the law– making sure the exchanges are ready to go on time. As Ezra Klein puts it, delaying the employer mandate, “raises the law’s first-year costs, in order to reduce its first-year problems.”