Warning: Use of undefined constant wp_cumulus_widget - assumed 'wp_cumulus_widget' (this will throw an Error in a future version of PHP) in /home/customer/www/whatifpost.com/public_html/wp-content/plugins/wp-cumulus/wp-cumulus.php on line 375
 Where to find the real abortion battle
≡ Menu

Where to find the real abortion battle

The Washington Post’s Sarah Kliff has an important post explaining how the fight over abortion has moved to the state level:

Prior to the health reform debate, there wasn’t much debate about whether private insurance plans should cover abortions. It was so little discussed that data on how many plans offer coverage is relatively sparse, although one Kaiser Family Foundation study from 2002 says 87 percent do pay for the procedure (anti-abortion groups have, however, protested this number.)

But ever since the reform law passed, it’s been a hot-button issue. This legislative session alone, 24 states considered laws that would restrict insurance coverage for abortion. Thirteen of those laws passed. Eight bar any private insurance plan from covering abortion, while the rest only apply to plans purchased on the exchanges, the new health insurance marketplaces that will launch in 2014. 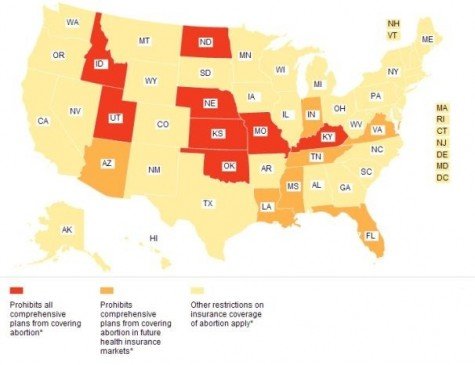