Warning: Use of undefined constant wp_cumulus_widget - assumed 'wp_cumulus_widget' (this will throw an Error in a future version of PHP) in /home/customer/www/whatifpost.com/public_html/wp-content/plugins/wp-cumulus/wp-cumulus.php on line 375
 Where are they now? Public Option Edition
≡ Menu

Where are they now? Public Option Edition 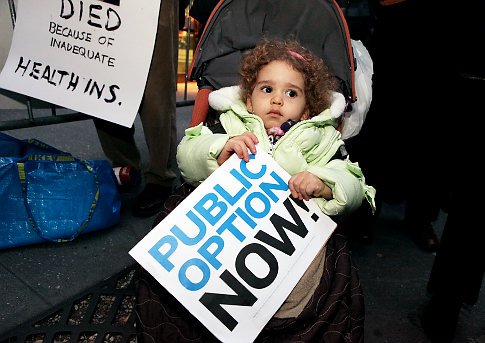 When it was released last summer, it instantly became the big hit of the 2009.  Some said it was too controversial, but most Americans said they liked it.  For months, you couldn’t turn on a television or a radio without hearing about it.  There were times when we were told it was dead, that we should just move on to the next new thing.  But it always managed to come back, just as popular as ever.  Then, last March, that all changed.  It finally fell off the charts, and has barely been heard from since.  And so we ask… what ever happened to the public option?

Turns out that a group of 128 House Democrats are pushing to reintroduce a robust public option.  Representative Pete Stark (D-Calif.) asked the Congressional Budget Office to crunch the numbers on a public option that would pay doctors Medicare rates plus 5%.  Here’s what they found:

That’s right– a public option, funded totally by premiums and not taxes, would cost less than private plans and reduce the deficit.

While it may sound like a no brainer, especially at a time when everyone says they’re concerned about the deficit, the public option still faces an uphill battle.  For one, House Democratic leaders don’t want to start another health care fight before the midterm elections.  However, this isn’t something that needs to happen immediately.  As Lynn Woolsey (D-Calif.) told the Washington Post: “This will be there for the next Congress.”

But the big problem is the Senate.  You might recall that even with a sixty vote super-majority, Democrats couldn’t get the public option into the final bill thanks to Senator Joe Lieberman.  (Although, to be fair, a few other Democratic Senators probably opposed the public option as well– they just didn’t have to speak up after Lieberman threatened to filibuster.)  In any case, after the midterm elections Democrats will almost certainly have fewer seats in the Senate, putting them even further away from the 60 vote threshold.

One alternative would be to use reconciliation to pass the public option.  After all, that’s how the Democrats passed health care reform after losing Ted Kennedy’s seat– you can use reconciliation to pass things with only 50 votes (Vice President Joe Biden would break a tie), so long as they have to do with the budget and wouldn’t add to the deficit.  The public option qualifies on both counts.

Here’s the problem.  In order to use reconciliation, the House has to include reconciliation instructions in that year’s federal budget.  Unfortunately, the House didn’t do that this year.  Instead they passed a “budget enforcement resolution,” which is a little different- it’s less specific than a regular budget, and (importantly for the public option) does not include reconciliation instructions.  Which means that unless the filibuster is changed, Democrats will need to find 60 votes to pass anything next year.  That’s bad news for popular items like the public option and the job creation bill.

It’s crazy if you think about it- the public option:
~ wouldn’t raise taxes on anyone; AND
~ would save consumers money and reduce the deficit.
Polls show that 60% of the country supports a public plan. It passed once in the House and the majority of Senators support it.  Yet it still might not pass, because of the Senate’s weird rules.

Still we have hope.  As concern over our debt grows, Congress is going to look for ways to reduce the deficit besides raising taxes or reducing spending.  The public option is one of the few ways to do that.

Next post: Check out the new History of Health Reform timeline!