Warning: Use of undefined constant wp_cumulus_widget - assumed 'wp_cumulus_widget' (this will throw an Error in a future version of PHP) in /home/customer/www/whatifpost.com/public_html/wp-content/plugins/wp-cumulus/wp-cumulus.php on line 375
 Where are they now?: Air pollution rules edition
≡ Menu

Where are they now?: Air pollution rules edition 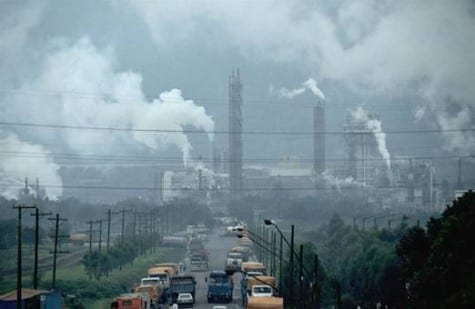 Now that world leaders have reached a new agreement on climate change (well… sort of, anyways), we figured now would be a good time to check back in on another environmental issue: the fate of three new air pollution rules from the EPA that we covered back in January.

What it does: The EPA estimates that there are 200,000 large boilers operating in industrial and commercial facilities across the country. Every year, each one of these boilers– which burn coal, natural gas, oil, or biomass to generate heat and electricity–  spews up to 25 tons of toxins like mercury, lead, dioxins, formaldehyde, sulfur, hydrochloric acid, and soot into the atmosphere. The new rule would set stricter limits on these toxic emissions.

Where it stands now: Things didn’t look good back in May, when, as we noted, the EPA announced it was postponing the new boiler rules, after complaints from industry groups over potential cost. Meanwhile, in October, House Republicans passed the a bill that would delay implementation of any new standards for at least five years, and exempt smaller boilers, often in urban areas, from any regulation at all. Meaning, if a boiler operator in your neighborhood wanted to heat their building by burning car tires and cleaning solvents there’d be nothing stopping them. (Luckily the bill died in the Senate.)

But the White House held its ground. Last week, the EPA released a new version of the regulations, which eased some of the burden on boiler operators while preserving the same health benefits as the older version. Only the 5,500 dirtiest boilers would require new pollution controls, while the remaining 195,000 industrial boilers will be able to meet the new requirements through routine tune-ups. (Another 1.3 million boilers are too small and release too little pollution to be covered by the rule.) The EPA estimates the new regulations will cost boiler operators $1.7 billion less than the original version, providing $12 to $30 of health benefits for every $1 it costs to implement, by preventing up to:

Republicans are still fighting the regulations though— they tried to sneak a provision delaying the new rules into a bill extending the payroll tax cut. Senator Barbara Boxer (D-Calif.) responded to the move by pointing out that a strong economy and environmental safeguards go “hand in hand”:

“There’s one simple truth: If you can’t breathe, you can’t work. You can’t get your degree if you’re stuck in the emergency room because you had an asthma attack.”

What it does: Ozone in the upper atmosphere is a good thing- it keeps us from getting fried by the sun’s UV rays. But ozone closer to the ground is the primary ingredient in smog– it can damage your lungs if you breathe too much of it, leading to asthma, bronchitis, heart attacks, and premature death.

The EPA proposed setting new limit for ozone pollution– between 60 and 70 parts per billion, down from 75 ppb now. [It’s worth noting that the 60 ppb is the standard Europe uses now, and the World Health Organization recommends an even stricter standard of 51 ppb.] Research shows that tightening the standard could save as many as 12,000 lives a year.

Where it stands now: President Obama actually overrode the EPA on this one, asking director Lisa Jackson to withdraw the new standards. Environmentalists freaked out– League of Conservation Voters president Gene Karpinski called it “the worst thing a Democratic president had ever done on our issues” and the National Resources Defense Council’s clean air director referred to the move as the “Friday Smog Massacre.”

It was a disturbing political move from a President who promised to “restore science to its rightful place” in setting policy. Still, we think environmentalists may have overreacted on this one. For starters, they glossed over the rule’s cost– as high as $90 billion a year, depending on how strict the final standard was– a tough sell in this economy. Second, and more importantly, the new rule won’t disappear– it’s simply being postponed until 2013, when it had been scheduled for review anyways, and the economy should be stronger.

What it does: One of the problems with trying to regulate air pollution is that air moves. Pollution generated by some states is being carried downwind, making it hard for neighboring states to meet national clean air standards.

Where it stands now: The final rule was published in July and takes effect January 1. We covered this in a health snapshot back in July but in case you missed it here are some health stats on the new rules: 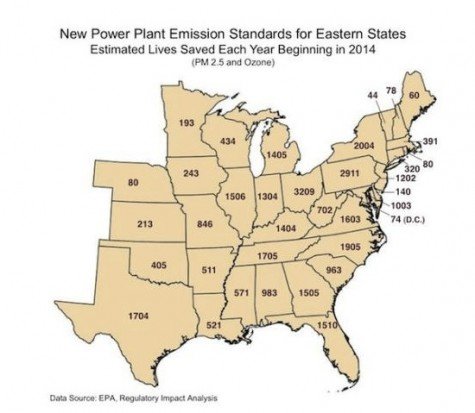 Next post: New air pollution rule! How it will effect your health

Previous post: Is there a single-payer “bomb” in the health reform law?