Warning: Use of undefined constant wp_cumulus_widget - assumed 'wp_cumulus_widget' (this will throw an Error in a future version of PHP) in /home/customer/www/whatifpost.com/public_html/wp-content/plugins/wp-cumulus/wp-cumulus.php on line 375
 What’s in the new health law? Part 9: Paying for it
≡ Menu

What’s in the new health law? Part 9: Paying for it 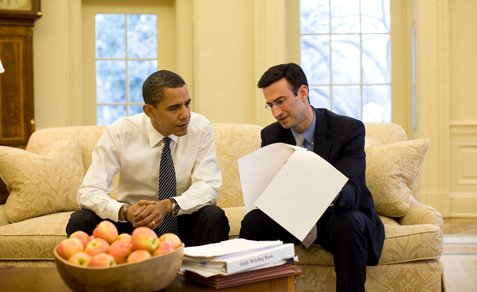 President Obama and Peter Orzag, director of the Office of Management and Budget

Most of the money to pay for health care reform will come from reductions in spending.  Drug companies will give Medicare and Medicaid a discount, the government won’t continue to overpay insurance companies for Medicare Advantage– things like that.  But expanding health coverage to over 30 million Americans will still require raising some money through taxes.  Here’s how the new law does it.

Increase the Medicare tax on high income households
Before health reform, the Medicare tax was the same for everybody- 2.9%, with the worker and employee each paying 1.45%.   For the vast majority of us, that won’t change.  But individuals making more than $200,000/year will see their Medicare tax go up by 0.9%- they’ll now be paying 2.35% of their wages.

There’s also a new Medicare tax of 3.8% on the unearned income (money from things like dividends, interest, and rent) of high income households (individuals making more than $200,000, couples making more than $250,000).  The tax can apply to a wealthy person’s investment income, or their adjusted gross income above the threshold– whichever is less.

Tax on High Cost Medical Plans – the “Chevy” tax
This was the so-called Cadillac tax in the Senate bill– but according to the Christian Science Monitor, it’s been pared back so far it might as well be called the “Chevy with leather and A/C” tax.

The idea was that the tax would persuade workers and employers to choose low cost plans, which would help reduce the overall growth in health care costs.  Employers would then, in theory, give the money they save on health coverage to their employees in the form of higher wages.  But unions have argued that the tax would fall mainly on middle class workers, and there was no guarantee that employers wouldn’t just pocket the money.  And so they successfully fought to raise the limit of what’s considered a “Cadillac plan.”

The health care bill would impose an excise tax on insurers of employer-sponsored health plans that cost more than $10,200 annually for individual coverage, or $27,500 annually for family coverage. For retirees and those in high-risk professions the threshold is even higher ($11,850 for individuals and $30,950 for families).

The tax would be 40 percent of the cost of the plan that exceeds those dollar thresholds.  So if an individual plan cost $11,000, the tax would only apply to the $800 above the limit.

The Obama administration figured the health care industries should help pay for reform, since they’ll be getting lots of new customers.  So after negotiations with some big sectors, the White House struck a number of deals.

Trim some health related tax breaks
The new law will:

Tax on Indoor Tanning
Original versions of the bill had a tax on elective cosmetic surgery, but after lobbying from plastic surgeons, it was replaced by a 10% tax on indoor tanning.

Eliminates Medicare Part D Subsidy to Employers
Companies that provide retired employees a prescription drug benefit that’s comparable to Medicare Part D get a government subsidy to help them pay for it.  But before reform they could also get a tax deduction for providing that same drug coverage.  In other words they could claim a tax deduction for having a prescription drug program, even though they weren’t spending their own money for it.  The new law eliminates that deduction.

Additional Revenue Provisions
These are things that don’t really have anything to do with health care, but the money they generate will go to pay for health reform.  They are:

Cost of health coverage will be shown on W2’s
This one doesn’t raise any money, but it’s interesting.  I’d bet that most of us have no idea how much our employers pay for our health insurance.  We have a rough idea of whether it’s a good plan or not, but that’s about it.  Under the new law you’ll finally be able to see the dollar amount on your W2.

Doing the Math
If you add up all the taxes in the bill it comes to about $414 billion over ten years.  The CBO estimates that the entire reform bill will cost $940 billion.  Since less than half of that comes from these taxes, the rest of the money will come from savings generated by the cost reduction measures in other parts of the bill.  Meanwhile, 95% of us won’t see a tax increase at all, and many people will actually get something of a tax break, in the form of subsidies to help buy insurance.

[This is part 9 of a ten part series on what’s in the Patient Protection and Affordable Care Act.]