Warning: Use of undefined constant wp_cumulus_widget - assumed 'wp_cumulus_widget' (this will throw an Error in a future version of PHP) in /home/customer/www/whatifpost.com/public_html/wp-content/plugins/wp-cumulus/wp-cumulus.php on line 375
 What’s in the new health law? Part 6: Transparency
≡ Menu 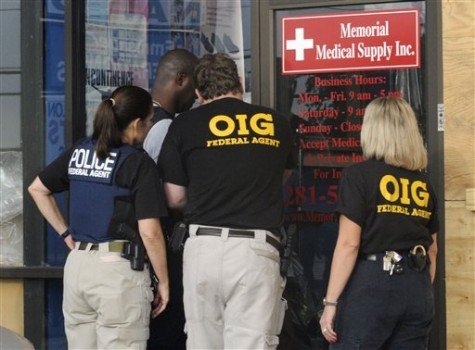 This is another ones of those areas that got almost no media time in all the debates about health care reform, but it’s an important part of the new health reform law.  Basically, everything in this section deals with making sure that when doctors, hospitals, and medical device suppliers are doing business honestly, and not by ripping off customers or the government.

According to a 60 Minutes report last fall, to set up a crooked company, all you have to do is:

FBI agents say that there is an entire industry of people who do nothing but provide lists of Medicare patients.  Then, according to 60 minutes:

Once the crooked companies get hold of the patient lists, usually stolen from doctors’ offices or hospitals, they begin running up all sorts of outlandish charges and submit them to Medicare for payment, knowing full well that the agency is required by law to pay the claims within 15 to 30 days, and that it has only enough auditors to check a tiny fraction of the charges to see if they are legitimate.

There are thousands of these fraudulent medical supply companies in low rent strip malls across the country.  Many look like they could be legitimate suppliers, except no one is ever inside, and phone calls are never returned.  Usually by the time Medicare has figured out that fraud has been committed the perpetrators have packed up and moved on.  (You can watch the entire 60 minutes segment here.)

Even before health care reform passed, the Obama administration had already begun to crack down on Medicare fraud:

Under the new law, there will be stricter penalties imposed on individuals who purchase, sell, or distribute Medicare beneficiary identification numbers or provider billing numbers, including jail time.  And it prevents providers and suppliers who have been terminated from Medicare or Medicaid in one state from setting up operations in another state.

There are a bunch of new requirements to make nursing homes safer, and make it easier for consumers to compare them:

Patient-Centered Outcomes Research Institute
It sounds like a mouthful, but the purpose of this institute is pretty straightforward: doing research on the best ways to prevent, diagnose, treat, and monitor various illnesses. An important focus will be looking at differences among subpopulations: certain treatments work better for certain groups.  For example, younger people might respond better to a certain blood pressure medication than older people– or vice versa.  For more on the type research the new institute will do, and why it’s so important, check out this article from Think Progress’s Wonk Room.

New disclosure rules for physicians and limits on physician-owned hospitals

There’s a federal law called the “Stark Law” that prohibits a physician from referring a Medicare or Medicaid beneficiary to an entity with which the referring physician, or members of his or her immediate family, has a financial relationship.  It makes sense– physicians should make referrals because it’s in the best interest of their patient, and not because they stand to make some extra cash on the side. But, there are currently a ton of exceptions to the Stark law that doctors and hospitals can apply for.

One huge exception has been physician owned hospitals- physicians are allowed to refer patients to hospitals that they have part ownership of, just as long as their ownership stake is in the entire hospital and not a distinct part or department.  The problem with physician-owned hospitals is that they tend to have much higher costs than other hospitals– they have higher profit margins and cherry pick the most profitable patients.  Also, because of the weird economics of health care, physician-owned hospitals tend to drive up health care prices in the communities in which they operate.

[This post is Part 6 of a ten part series on what’s in the Patient Protection and Affordable Care Act.  Click here to check out other sections.]