Warning: Use of undefined constant wp_cumulus_widget - assumed 'wp_cumulus_widget' (this will throw an Error in a future version of PHP) in /home/customer/www/whatifpost.com/public_html/wp-content/plugins/wp-cumulus/wp-cumulus.php on line 375
 What’s in the New Health Care Law? Part 3: Medicare
≡ Menu 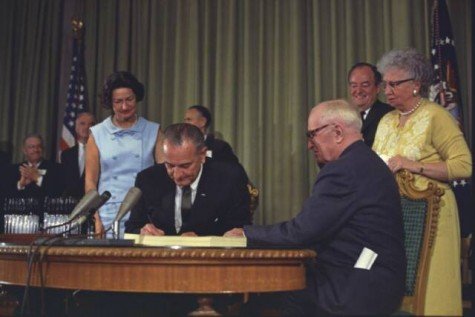 Medicare- this part of the bill was an easy target for anyone who wanted to attack.  In the months of debate leading up to final passage, it was the most misstated and misunderstood part of health care reform, and opponents spread all sorts of crazy rumors:  Massive cuts to Medicare!  The bill would bankrupt the government!  Death panels for seniors!

It was easy to get people riled up:

But really, it’s nothing that drastic.  Here’s how Medicare will change under the new law…

Linking Hospital Payments to Quality
The new law establishes a “value-based purchasing program”: hospitals that perform better will get bonus payments from Medicare.   Health and Human Services (HSS) will determine how exactly to measure performance for each hospital, but it will be things like how well hospitals do at reducing complications, infections, and unnecessary deaths from surgery.  There are also plans to expand these quality bonus payments to long term care facilities and individual physicians.

Many of these readmissions are avoidable, but hospitals that readmit patients actually get paid more money than hospitals that do it right the first time.  Bad hospitals get paid to treat both the original sickness AND the complications.  Under the new law, hospitals will get paid less for these avoidable admissions.

Developing a National Strategy for Improving Health Care Quality
The law instructs HSS to identify areas of our health care system that have the most potential for improvement and develop a strategy for addressing them.   So, for example, yesterday we talked about how the United States has an extremely high infant mortality rate compared to other industrialized countries, and it’s especially high for minorities.  HSS might decide that addressing this disparity is a national priority, and develop a plan for reducing infant deaths.

Encouraging the Development of New Patient Care Models
You know how patient care works now.  You get sick, you go to the doctor, the doctor sends you to a specialist or, if it’s a complicated chronic condition, a bunch of specialists.  And each doctor gets paid for every test and procedure they order- often there’s not much coordination of care, and the doctors have an incentive to do more than you actually need.  It’s expensive, and in medicine more is not necessarily better– these extra procedures can sometimes end up making your health worse.

In the bill there are a bunch of trial programs to test different ways of paying doctors and coordinating care.  For example, instead of getting paid for every procedure, some of the test programs will give doctors one big payment for everything they do in treating an illness.  Health policy experts are really excited by these trial programs– if they work it would go a long way in reducing medicine costs.

Reducing Medicare Payments to Certain Health Care Providers
There are a few ways the bill will reduce payments to the providers of certain types of medical services, although it’s buried under some technical language:

Well, that turned out to be wrong.  Advantage insurers charge the government more money, not less– the average is 14 percent more per-patient (and sometimes as much as 20%) than what traditional Medicare pays providers.  The new law doesn’t eliminate Medicare Advantage (despite rumors to the contrary)– it just eliminates the subsidy to private insurance companies.

The government will now pay insurance companies roughly the same for Medicare Advantage plans as it pays for traditional Medicare coverage.

Closing the Donut Hole in Medicare’s Prescription Drug Program
The ‘donut hole” is the gap in coverage in Medicare’s prescription drug program.  Medicare stops paying for prescriptions after the plan and beneficiary have spent $2,830 on prescription drugs, and only starts paying again after out-of-pocket spending hits $4,550.  The White House estimates that this ends up costing seniors who fall into the gap an average of $4080 every year, and many can’t afford it.The new law will eliminate the donut hole slowly, starting with a $250 rebate to seniors who hit the gap this year, and phasing it out entirely by 2020.

Create an Independent Payment Advisory Board
This will be a 15-person board made up of doctors and health policy experts, who will make recommendations to Congress on ways to reduce the per capita growth in spending in Medicare.  In itself, this wouldn’t be a big deal- Congress gets recommendations all the time on how to reduce Medicare spending- but then the lobbyists get involved, and Congress usually ends up ignoring the recommendations.

The Board is prohibited from submitting proposals that would ration care, increase revenues or change benefits and eligibility.

Other provisions
There are a bunch of other smaller provisions for improving quality and access, but unless you’re working on a PhD in health care policy, you probably don’t need to know (or care) what they are.  But if you’re curious you can read the text of the Senate Bill here– most of these smaller provisions tweaking Medicare made it through to the final version.

Thankfully, that’s it for Medicare.  Next time we’ll look at section four of the bill:  Preventing Chronic Disease and Improving Public Health (you might want to do some pushups and take some vitamins to get ready).