Warning: Use of undefined constant wp_cumulus_widget - assumed 'wp_cumulus_widget' (this will throw an Error in a future version of PHP) in /home/customer/www/whatifpost.com/public_html/wp-content/plugins/wp-cumulus/wp-cumulus.php on line 375
 What’s in the new health care law? Part 10: Native Americans
≡ Menu 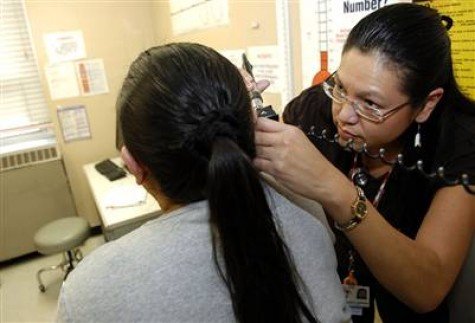 If you’re not Native American, chances are you don’t know that Indian Health Service (IHS) even exists.  But it’s extensive– IHS runs 29 hospitals and dozens of health centers providing free care to 1.9 million American Indians and Alaskan natives, most of whom live on reservations.  However, as the New York Times has pointed out, providing health care to 564 federally recognized tribes, scattered over huge rural areas, has been a struggle:

Too few doctors. Too little equipment. Hospitals and clinics miles of hardscrabble road away.

In cities, where over half of the country’s roughly 3 million Indians now live (and nearly 5 million including part-Indians), only 34 programs get Indian Health Service funding, providing mostly basic care and arranging more advanced care and coverage elsewhere.

By all accounts, the Indian Health Service is substantially underfunded.  Money shortages, bureaucracy and distance can delay treatment of even serious conditions for months, even years.

The article talks about one woman with breast cancer who chose to have an unneeded mastectomy, because radiation therapy would have meant months of 5 hour roundtrip drives from her home on the Hopi reservation.  Another woman, a single mother with thyroid cancer, had to leave her job in Phoenix and move to an Apache reservation 200 miles away in order to receive care.

Geography is a problem, but so too is funding.  Last year Congressional funding for IHS was $3.6 billion, which when combined with other sources of revenue meant that the IHS spent only $2690 per person.  Meanwhile, the rest of the country spent over $6800 per person on health care costs.

Back in 1976, the government recognized that Native Americans were facing worse health outcomes than the rest of the country.  Congress passed the Indian Health Care Improvement Act (IHCIA) to address these differences and modernize the Indian health care system.  As part of the Act funding for IHS was increased.

In 2001 the IHCIA expired, but the health differences still exist. Native Americans compared to other ethnic groups are:

Last year, President Obama allocated $500 million in stimulus money for Indian health, which the website Alternet called, “a good start, but far from anything resembling comprehensive coverage.”  Real help will come with the new health care law, which reauthorizes the IHCIA.

The National Indian Health Board has outlined the ways the IHCIA will help improve different aspects of health in Indian country.  These include:

All right this is the last section of the new health care law– we made it!  In case you missed them, be sure to check out out other posts on what’s in the Patient Protection and Affordable Care Act here.

Previous post: What’s in the new health law? Part 9: Paying for it