Warning: Use of undefined constant wp_cumulus_widget - assumed 'wp_cumulus_widget' (this will throw an Error in a future version of PHP) in /home/customer/www/whatifpost.com/public_html/wp-content/plugins/wp-cumulus/wp-cumulus.php on line 375
 What’s going on with the VA? Part 1: The waitlist scandal
≡ Menu

What’s going on with the VA? Part 1: The waitlist scandal 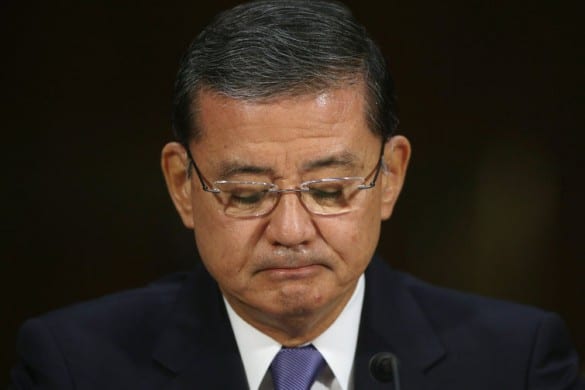 If you follow the news at all, by now you’re probably at least aware that there are some big problems with wait times at the Department of Veterans Affairs (VA). What’s confusing (especially if you haven’t been following closely) is that there are two separate issues:

Many people have combined the two issues into one big “the VA is a mess and Obama has failed to fix it” storyline, but that’s misleading for a couple reasons.

For one, the VA continues to be one of the best healthcare systems in the country– in fact, that’s one reason why it has longer wait times. As one expert put it, “Veterans are piling up at the door because they’ve heard from other veterans that the VA is a great place to get care.” Also, while both wait time issues are problems (and have been since long before President Obama took office), there’s been a huge difference in how each was dealt with. Obama’s VA has made major strides in slashing the backlog of disability claims, but its efforts to reduce wait times for doctors appointments have been a disaster.

And so to avoid confusion, we’ll tackle each issue in a separate post. First up, the disaster: secret waitlists for VA doctors appointments.

For decades, the VA was something of a national embarrassment, with a reputation for dirty hospitals, out-dated equipment, and incompetent doctors (think Born on the Fourth of July), but in the late ’90’s, under the Clinton administration, it was quietly transformed into one of the country’s best healthcare systems. Since then, the VA has continued to provide quality care that veterans rate highly, except for one key area: wait times. Writes German Lopez of the website Vox:

At the same time, the review found VA patients are less satisfied with their long wait times than the rest of the public.

In response to that 2010 review, Robert Petzel, the VA’s undersecretary for health, announced that the VA would be cutting average wait times from 30 days to just 14 for non-urgent appointments. It was an ambitious goal, especially when you consider that, according to a 2014 survey, the average wait time to see a family physician outside the VA is 19.5 days, and in some cities it can be much longer (for example, in Boston the average is 66 days).

Not only did Petzel set a goal for wait times that’s much better than the private health system, but he did it at a time when demand for VA medical services was exploding. In President Obama’s first term alone, a million more veterans enrolled in the VA’s health system, and the total number of annual outpatient visits increased by 16 million. That’s partly because tens of thousands of military personnel have returned home from Iraq and Afghanistan, many with severe injuries, and partly because veterans from past wars, like Vietnam, are getting older and require more care.

But while demand grew, funding didn’t keep up. The VA’s overall funding has increased substantially under the Obama administration, but “until last year, the VA’s medical care budget hadn’t increased any faster than the general rate of medical inflation” reports Merrill Goozner, editor of Modern Healthcare. Last year, the agency’s healthcare facilities received a big bump, but that money wasn’t going to lower wait times overnight– it takes time to hire and train new doctors and staff.

Soaring demand and too few doctors to keep up has meant that the doctors who stay are getting crushed with patients. The New York Times writes:

In the past three years, primary-care appointments have leapt 50 percent while the department’s staff of primary care doctors has grown by only 9 percent, according to department statistics. Those primary care doctors are supposed to be responsible for about 1,200 patients each, but many now treat upward of 2,000.

So to recap, the VA was (1) attempting to cut waits to see a doctor to just 14 days (2) at a time when veterans were scheduling millions more doctor visits than ever before (3) all without increasing its medical care budget and (4) with too few doctors to serve its existing patients. Something had to give, and apparently that something was VA hospital staff.

A recent Wall Street Journal article quotes Paul Light, a professor at NYU’s Wagner School of Public Service explaining how employees turn to cheating in the face of goals that can’t be met:

“The term I use for this is ‘beyond stretch.’ If you set [a goal] too far, people just throw their hands up. You just give up and say, ‘How are we going to do a workaround?’ It’s one of the most common explanations for failures I have been studying.”

It sounds like that’s exactly what happened in Cheyenne Wyoming, where a nurse admitted to manipulating appointment dates to make sure they met the 14-day mark. In a 2013 email, the nurse wrote:

“Yes, it is gaming the system a bit. But you have to know the rules of the game you are playing, and when we exceed the 14 day measure, the front office gets very upset, which doesn’t help us.”

An added incentive to cheat

The flip side of the “front office” getting upset when wait times exceeded the 14-day measure is that employees who reduced wait times were given performance bonuses. This was even more incentive to game the system, especially since, similar to VA doctors, VA administrators are paid far less than their private sector counterparts. Sharon Helman, the Phoenix VA director, received a $9,345 bonus (which was rescinded in the wake of the scandal) on top of her $169,000 per year salary. Meanwhile, according to Modern Healthcare’s Goozner, CEO’s of two similarly sized non-profit hospitals in Phoenix made ten times that amount. He writes that perhaps the VA is “getting what they pay for.”

The failure of top VA officials

Even before Petzel shortened the target for wait list times, a 2010 memo from a top VA executive warned all VA health system managers that strategies for gaming the system “would not be tolerated.” Clearly they knew that wait-time manipulation was an issue.

However, when asked during a Congressional hearing what the VA had done to ensure that medical centers had followed the memo, Petzel couldn’t offer specific examples. VA Secretary Eric Shinseki pointed to the fact that over the last two years 6,000 employees had been fired for poor performance or misconduct, but didn’t say whether any of those were for hiding treatment delays. Meanwhile, if employees were being fired for “poor performance” and performance was judged partly based on wait times, those firings may have just encouraged more cheating.

Simple steps could have helped avoid this behavior writes Catherine Burke, a professor of public service at USC. Managers checking on wait times would ensure that lower-level employees weren’t manipulating things, and an outside audit system, to ensure that reported wait times matched up with actual wait times, would keep the managers themselves honest. Apparently neither was happening. The website Vox gives just one example of lax oversight:

The Government Accountability Office, in one of its reviews, found three of four clinics certified themselves as in compliance with scheduling policies, but none of them actually were. The VA could, in theory, audit these facilities, but it rarely does — largely because the issues were out of the public spotlight until now.

Instead, failure to stop the cheating led to an even bigger problem– the numbers, while bogus, looked good, so the department had no reason to take steps that would actually reduce wait times.

Did officials look the other way?

The question now is whether officials’ ignorance was intentional. They knew in 2010 that cheating was happening, and there was plenty of data about growing patient demand and doctor shortages that should have made them question the wait time stats. Instead it looks like they turned a blind eye to keep the good numbers coming in and the higher-ups in Congress and the White House off their backs. (And by the way, this has been a longstanding problem at the VA).

The whole thing sounds like this scene out of The Wire– just replace “felony rates” with “wait times”:

The VA is finally taking steps to address secret waitlists. According to its inspector general, investigators are now making surprise visits, which reduces “the risk of destruction of evidence, manipulation of data, and coaching staff on how to respond to our interview questions.” They’re also taking surveys of veterans to find out if their actual wait times are matching up with what VA employees have entered.

As for the underlying problem– that veterans wait too long for care– the department has announced that it would offer those facing wait times longer than 30 days the option of seeking care at private facilities. It’s also said it would maximize access to care within the VA by “extending clinic hours on nights and weekends, paying overtime to health care workers, and beefing up understaffed clinics.”

Meanwhile there are things Congress could do, like funding a new scheduling system (the GAO reports that the current one is 25 years old), and of course more doctors and facilities. Unfortunately, back in February, Republicans killed a bill that would have provided funding to open or expand two dozen new VA medical centers. So for now at least, it looks like the VA will have to make do with the resources it already has.

Next post: What’s going on with the VA? Part 2: The disability claim backlog

Previous post: What Obamacare’s critics are saying about a new study showing that it could save lives (and why they’re probably wrong)