Warning: Use of undefined constant wp_cumulus_widget - assumed 'wp_cumulus_widget' (this will throw an Error in a future version of PHP) in /home/customer/www/whatifpost.com/public_html/wp-content/plugins/wp-cumulus/wp-cumulus.php on line 375
 What’s going on with the VA? Part 2: The disability claim backlog
≡ Menu

What’s going on with the VA? Part 2: The disability claim backlog 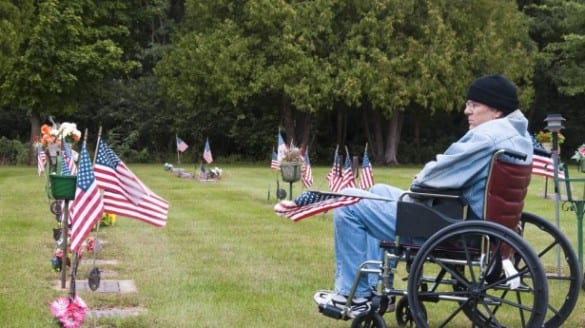 Yesterday we talked about the doctors waitlist scandal engulfing the VA. The Obama administration definitely deserves the heat they’re taking on this– it was a major management failure, with VA officials setting unrealistic goals to reduce wait times and then looking the other way as VA employees juked the stats to meet them.

The scandal comes in the wake of complaints about another problem with long waits involving the VA: a massive backlog of disability claims. About 300,000 claims are in the backlog and some veterans have waited years for a final decision. On the surface, those numbers sound pretty bad, but dig a little deeper and it’s a completely different story. If the waitlist scandal shows the consequences of officials juking the stats, the disability backlog story shows the consequences when they don’t.

One of the biggest critics of the VA’s handling of the disability claims backlog has been The Daily Show’s Jon Stewart. He did a whole series of segments on the issue, starting with this one in March of 2013:

Stewart says that “not only have we not solved the problem, but the problem has in fact worsened,” and that the fact that nearly a million veterans are waiting for benefits is “f—ing criminal.” The whole thing is based on a report from The Center for Investigative Reporting, which said “the agencies ability to provide service-related benefits has virtually collapsed under President Barack Obama.” The article was quick to cite numbers showing that the backlog and average processing times had increased, but missed what was really going on behind the numbers.

The disability benefits claim process was a mess long before President Obama took office. According to American Legion Magazine, here’s how Dr. James Peake, a VA secretary for George W. Bush, described the system in 2008:

However, the Bush administration did not change it, so when Eric Shinseki took the helm as VA Secretary in 2009, the department was still using a paper filing system, with claim folders “18 inches thick on average,” according to one VA spokesperson. Reportedly there was so much paperwork in one claims office in Winston-Salem that “the floors sagged, and one worker was injured when stacks of claims toppled over on him.”

At the same time, there was a massive influx of veterans from Iraq and Afghanistan– nearly 970,000 of those deployed since 9/11 have filed a claim, and many of these claims were more complex than what the department typically saw in the past, writes The National Journal:

Due to medical advances, many service members who would have died from their injuries in past wars are now being saved, but they are returning home with more numerous and more complicated injuries. Vietnam veterans typically claimed three or four injuries. Now a single veteran from Iraq or Afghanistan routinely submits a claim with the number of injuries in the double digits.

Dealing with all these new veterans in a department that already struggled to process claims quickly would be a challenge in and of itself. Yet Secretary Shinseki made a number of decisions that were good for veterans and helped the VA in the long run, but, in the words of one NPR correspondent, “Really ruined his own bottom line in terms of clearing numbers.”

Prior to 2009, claims were considered “backlogged” if they were in processing for more than six months. The main yardstick that the VA used to track performance back then was average processing time, which in 2009 was 191 days and they hoped to get down to 125 days. But as Shinseki told Military.com, the average processing time isn’t a great measure of progress:

“So if I completed a claim in one day, and another claim in 249 days, that’s a 125-day average, and that would have ended the backlog. It just seemed to me a bad way to define the problem or try to solve it. So we said: No claims over 125 days.”

Besides the surge of new veterans from Iraq and Afghanistan, Shinseki decided to provide benefits to more older veterans as well:

Under Shinseki, VA simplified the process for filing post-traumatic stress disorder claims from veterans of all wars. He made compensable more illnesses for 1990-91 Gulf War veterans exposed to toxins and other health threats in that campaign. He also added ischemic heart disease, Parkinson’s disease and B-cell leukemia to the list of ailments for which Vietnam veterans can receive disability compensation, on presumption wartime exposure to the defoliant Agent Orange caused these conditions.

The Agent Orange decision, in particular, was huge, resulting in 280,000 retroactive claims. For two years, 37% of the VA’s claims processing resources were assigned to handling just these cases.

The Jon Stewart and the Center for Investigative Reporting (CIR) missed is that, thanks to a 1985 court ruling in Nehmer vs. U.S. Department of Veterans Affairs, these Vietnam-era claims required special handling, and because of court-ordered deadlines had to be prioritized. Shinseki says:

“They had to go through every page of every claim.  It wasn’t enough to say, ‘Vietnam, exposure to Agent Orange and therefore Parkinson’s disease [so] grant service connection.’ The Nehmer decision required them to see if there was anything else in the file…page by page by page.  And, by the way, Nehmer goes to the head of the line.  Everything else waits.”

Another overlooked aspect of the Agent Orange claims is that many veterans didn’t have to apply to get these benefits. Under Nehmer, the VA would automatically go back through the files of veterans that filed claims years ago to see if they, or their survivors, were eligible under the new rules. That, and the fact that the VA had been ordered by the courts to handle these claims first, may be why, as CIR reports, wait times were longer for veterans filing their first claim, like those returning from Iraq and Afghanistan.

Also, these retroactive claims could involve time-consuming “complex calculations and long searches for next of kin.” Tom Philpott of Stars and Stripes magazine details just some of the things the VA claims processors had to figure out:

If the veteran is deceased, VA will award back pay to the surviving spouse. If no surviving spouse is found, the National Veterans Legal Services Program, which litigated the Nehmer decision, will help to identify someone else who might be eligible for the benefits.

Besides disability pay, back payments could include Dependency and Indemnity Compensation for the widow, enhanced burial benefits if a veteran’s death was due to a service-connected condition, and 36-months of education benefit to a spouse or a child, no matter what age the child is today, if the veteran was 100-percent disabled at time of death.

That’s not to say the VA couldn’t have been better prepared for the influx of Agent Orange claims– Shinseki has said that he didn’t realize that these claims would take so long because of Nehmer. Still, if he was only concerned with keeping backlog numbers down, he could have just continued the Bush administration policy of denying these benefits. He didn’t, and instead the department got hammered for the delays this decision caused.

It may have caused some headaches, but it was the right call, says Robert Walsh, an attorney who represented thousands of veterans with claims before the VA:

“He forced the VA benefits system to work as it never had before. Tens of thousands of families received VA disability benefits and in-home health assistance they desperately needed.”

About those stacks of paper records

The CIR report says that after “four years and $537 million on a new computer system, 97 percent of all veterans’ claims remain on paper.” In fact, at that time of the report, the VA was in the middle of rolling out an electronic claims intake system, and had begun the massive project of digitizing all those old paper records.

Eight months later, CIR released a follow up titled, “Overtime, New Computer System Put Sizable Dent in VA Claims Backlog,” noting that since the original report, the number of veterans waiting over a year had dropped from 256,000 to 34,000 and the average wait time had dropped from 280 to 168 days. The tone of the article was self-congratulatory, as though the original CIR report and the attention it got were solely responsible for the progress.

To be fair, the article did lead to some changes at the VA that sped up processing, like an expedited process for older claims and mandatory overtime of 20 hours a month for all claims processors. But most of the progress was thanks to changes already in the works. The VA didn’t read the article and suddenly decide to write a brand new computer system and digitize hundreds of thousands of 18 inch files in less than a year. These efforts were already well underway– the CIR simply ignored them in its original reporting.

A massive reduction in the backlog

Currently the backlog of VA claims is about 300,000— less than half of what it was a year ago– and they say they’re on track to eliminate it by the end of next year. The average wait time now is 119 days, down from a high of 282 last year and shorter than it was at any time during the Bush administration. The VA says that accuracy has also improved– from 83% in 2010 to 91% currently (although some veterans groups disagree). All these facts got much less attention than the original report and no coverage from Jon Stewart.

The VA is an easy target– it’s a sprawling bureaucracy with a long history of disfunction. The Obama administration deserves some blame for not doing more to fix its problems (for example, besides the Phoenix waitlist scandal, the fact that VA and Department of Defense don’t have a joint electronic medical record system is ridiculous). On the other hand, they deserve credit for making significant progress on problems that have been ignored for decades, like slashing the claims backlog and the major strides they’ve made on veteran homelessness (In fact, Phoenix, where the secret waitlist story broke was the first city to effectively end veterans homelessness.) Kevin Drum, writing for Mother Jones, sums it up well:

This isn’t a story that deserves to be treated like Benghazi 2.0. Leave that to Fox News. If you’re going to tell this story, you need to tell it all, both good and bad.

UPDATE: Phillip Longman, senior editor at Washington Monthly and author of a book about the VA health system, Best Care Anywhere, argues that the real cause of the backlog is Congress, who “despite all their fine talk about honoring those who have served their country, have tasked the VA with administering laws and regulations that presume most vets don’t deserve VA care unless they can prove otherwise.” His article (part of a series on the VA) is definitely worth a read.

Next post: Why climate change is a health issue

Previous post: What’s going on with the VA? Part 1: The waitlist scandal