Warning: Use of undefined constant wp_cumulus_widget - assumed 'wp_cumulus_widget' (this will throw an Error in a future version of PHP) in /home/customer/www/whatifpost.com/public_html/wp-content/plugins/wp-cumulus/wp-cumulus.php on line 375
 What’s at stake for healthcare this election
≡ Menu

What’s at stake for healthcare this election 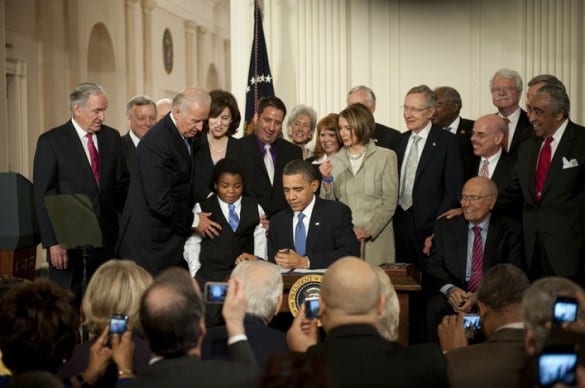 A couple months ago, I was invited to talk about the Affordable Care Act at an event organized by the Pittsburgh-based group Healthy Artists. After each of the speakers gave a five-minute spiel (the outline of mine is here, if you’re interested), members of the audience were asked to quickly make some art representing what they saw as the future of healthcare.

As people shared their art, many also shared their stories, and I started to notice a common theme: the anxiety of having health care attached to your job. Some were afraid to leave or lose their jobs for fear of losing coverage, some were afraid of not finding a job with good benefits; one woman spoke about how her brother had died because of a condition that went untreated because his job didn’t provide health insurance.

And that, more than maybe anything, is why the stakes in this election are so high. If President Obama is re-elected, the Affordable Care Act will definitely take effect in 2014, and for the first time ever, Americans won’t have to worry about being without health coverage if they lose a job or can’t find a job with benefits. Meanwhile, for the opponents of “Obamacare,” electing Mitt Romney is their last chance to repeal it.

The Washington Post’s Ezra Klein has a fantastic post on why this election is so important for the future of healthcare (those of you who follow us on Twitter may have already seen this), so we’ll let him explain. He writes:

If Obama is reelected, Americans who lose their jobs needn’t fear that their families will lose their health insurance. Discrimination based on preexisting conditions will be a thing of the past, and every state will have a health insurance exchange where insurers compete for business and where regulators can expel shoddy health plans. Medicare will continue its transition from the fee-for-service model toward a system of value-based payments in which providers are compensated for maintaining healthy patients. Expensive employer-based health plans will be slapped with a hefty tax beginning in 2018.

If Obama is reelected, in other words, we will see the first iteration of a uniquely American universal health-care system. If history is any guide, it will become effectively permanent soon after it is introduced. The reforms will be reformed, of course, as experience teaches us what works (and what doesn’t) and as future politicians put their stamps on the system. But the basic guarantee — that the state will provide health insurance, or subsidies to purchase it, to those in need — will likely prove immutable.

Meanwhile, as we pointed out in our last post, there’s plenty that Mitt Romney could do to kill the new law if he’s elected– and repealing Obamacare is one of the few issues he’s been consistent on throughout the campaign.

And so, according to Klein:

Yes, this election matters more than most. It matters more politically because the party in power will likely see their agenda affirmed by a cyclical recovery. But it matters more to actual people because the Affordable Care Act is poised to reshape American health care in two years. A vote for Obama is a vote for the law to take effect and for 30 million Americans to get health insurance they won’t get otherwise. A vote for Romney is a vote for the law — and its spending and its taxes — to be repealed. There are few elections in which the stakes are so clear.

[Definitely check out his entire article here and, of course, make sure to vote on Tuesday. Not sure where to go? Google has a great tool to help you find your polling place.]