Warning: Use of undefined constant wp_cumulus_widget - assumed 'wp_cumulus_widget' (this will throw an Error in a future version of PHP) in /home/customer/www/whatifpost.com/public_html/wp-content/plugins/wp-cumulus/wp-cumulus.php on line 375
 What this week’s court rulings actually mean for Obamacare
≡ Menu

What this week’s court rulings actually mean for Obamacare 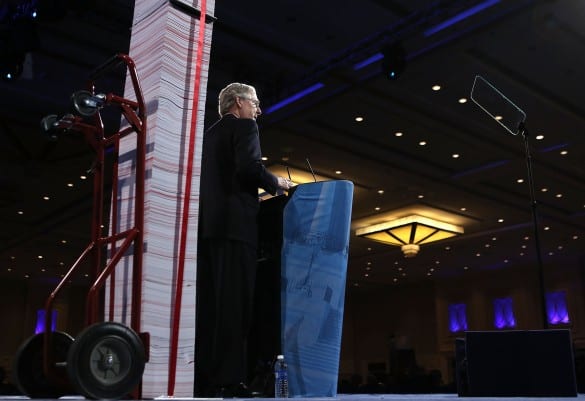 Conservatives once said that Obamacare was too complicated to understand– now they’re arguing that its language was perfectly clear.

We’ve been hesitant to write much about the latest Obamacare lawsuits working their way through the courts– mostly because they seemed unlikely to go anywhere. The issue in these cases is whether certain Obamacare exchanges are allowed to provide the subsidies that make premiums affordable for most people. Unlike the big Supreme Court decision a couple years ago, these lawsuits don’t involve whether or not the law is constitutional; instead it has to do with interpreting what Congress meant in a section of the law that’s somewhat unclear, and the case that Congress intended not to provide the subsidies is very, very slim.

Yet… here we are. Yesterday the D.C. Circuit Court of Appeals, in Halbig v. Burwell, ruled that Congress did in fact only mean for subsidies to go to certain exchanges. Then, just two hours later, the 4th Circuit Court ruled the exact opposite, saying the same thing as other lower courts: subsidies should be available in all 50 states.

So what happens now? Probably still not much– the D.C. Court decision will almost certainly be overruled soon– but since it now looks like there’s a slight chance the case could make it before the Supreme Court, here’s an explainer on what’s at stake.

What the lawsuit is about

The Affordable Care Act says that if a state chooses not to run its own insurance exchange, the federal government will run it for them. There are three key sections of the law here: Section 1311 lays out the rules states have to follow in setting up their own exchanges; Section 1321 allows the federal government to step in if a state chooses not to; and finally there’s Section 1401, which has the rules for who can get a subsidy to help pay for coverage.

The IRS has said even though the law doesn’t specifically mention the federally-run exchanges, Congress obviously meant for subsidies to be available everywhere, so it provided them on all the exchanges (the subsidies technically come in the form of a tax credit, that’s why the IRS is involved). But conservative scholars Michael Cannon and Jonathan Adler claim that Congress intentionally chose to keep federal exchanges from getting subsidies as sort of a punishment to coerce states into setting up their own. The IRS, they say, is acting illegally and without Congressional approval by providing these subsidies– thus the lawsuit.

Why the government should clearly win these cases

1. Other text in the law supports the government’s case. There are some long, complicated legal arguments for why that phrase “established by the State under Section 1311” refers to both state and federal exchanges, but Tom Goldstein, founder of SCOTUSBlog does a good job laying out the basics:

2. There’s no evidence that Congress intended to limit subsidies to only state-run exchanges. Congress definitely favored state-based exchanges, and expected that most states would want to run their own, and even provided a bunch of grant money to help cover the costs.

However, they knew that at least a few states wouldn’t set up exchanges– perhaps they’d choose not to, perhaps they wouldn’t be ready. For those states, the federal exchange would be a fallback, and not providing subsidies would be a disaster. As Topher Spiro, who worked as deputy staff director for the U.S. Senate Committee handling the bill, told Vox:

“The clear intent of the tax credits is to make insurance more affordable, especially when you’re mandating its purchase. It’s crazy to think of a mandate without subsidies. It just doesn’t make any sense.”

Another key piece of evidence that Congress wanted subsidies available in every state was the Congressional Budget Office’s estimate of the cost of the bill. Jost writes:

“The CBO repeatedly provided cost estimates of the ACA and HCERA in late 2009 and early 2010, but never suggested that premium tax credits might be reduced if states failed to establish exchanges. As Professor Abbe Gluck notes in a recent blog post (and forthcoming article), Senators often don’t listen to each other, but they all listen to the CBO,  which assumed that premium tax credits would be available to all Americans in all states.”

On top of all that, as University of Michigan law professor Nicholas Bagley points out, if Congress had intended to coerce states by withholding subsidies, they would have let the states know they were being coerced:

For threats to work, they have to be communicated. When Vito Corleone made the proverbial offer that can’t be refused, he didn’t just say “sign the contract.” He had Luca Brasi hold a gun to the head of a guy and “assured him that either his brains or his signature would be on the contract.” Without the gun, there’s no threat. […]

It’s outlandish to think that Congress meant to threaten the states [so] it inserted the innocuous phrase “established by the State under 1311” into the complex calculation of the tax credit. Why? Because the supposed threat was so well-hidden that the states didn’t even notice it. No gun, no threat.

3. When Congressional intent is unclear, courts are supposed to defer to the agency implementing the law. At most you can argue that the subsidies thing is ambiguous and open to interpretation. Well, the Affordable Care Act explicitly gives the IRS the authority to interpret that section. Even if it didn’t, courts are supposed to defer to agencies’ interpretations anyways, “unless they are arbitrary, capricious, or manifestly contrary to the statute.” The IRS’s interpretation is obviously none of those.

Why the Halbig ruling could be a huge deal, but (probably) won’t be upheld

If the subsidies were eliminated in federally run exchanges it would be a big problem:

A recent report from Urban Institute researchers estimated that a ruling against the Obama administration could cause 7.3 million people—about 62 percent of the 11.8 million people expected to enroll in federally facilitated marketplaces by 2016—to lose out on $36.1 billion in insurance subsidies. 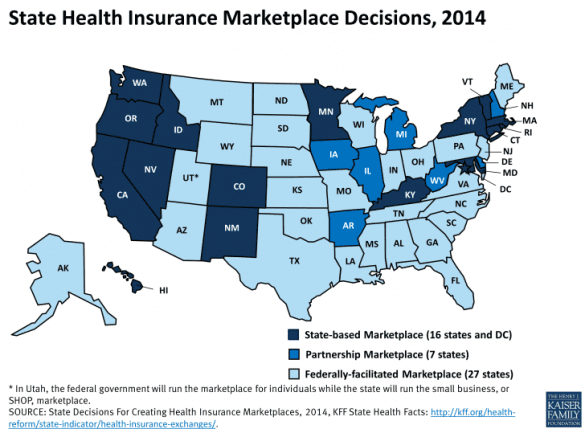 Unless your state is navy blue on this map, it would lose subsidies. Also Idaho and New Mexico (it’s an old map- they eventually went with healthcare.gov).

Still, you can ignore scary headlines like “A Court Ruling Just Blew a Huge Hole in Obamacare” and “Today’s Court Decision Might Make Health Insurance Unaffordable in the Poorest States,” at least for now.

In the U.S. Court of Appeals, cases are first reviewed by a panel of three judges– the two who decided Halbig were appointed by Republican presidents. However, you then can ask the full court to review the decision, and the D.C. Circuit Court right now has eleven judges: seven were appointed by Democrats, four by Republicans. Just hours after the Halbig decision, the Obama administration asked the whole bench to look at the case, and with such a large majority it will almost certainly be overturned. Also, remember that on the very same day another court upheld the subsidies, so eventually we’ll be looking at two decisions saying the subsidies can stay.

But in the end, it’s going to be up to the Supreme Court. Even though Halbig will likely be overturned, SCOTUSblog’s Goldstein says:

“The issue is so close and contentious that it is basically inevitable that the Supreme Court will have to resolve it.”

It seems unlikely that the Supreme Court would deal such a major blow to Obamacare by restricting the subsidies– if it was gonna torpedo the new law, it probably would have done so in the ruling two years ago. (Goldstein, for his part, thinks the same majority that upheld Obamacare before will uphold the subsidies in this new case.) Still, you never know.

What would happen if the Supreme Court did strike down the subsidies?

Ideally Congress would just pass an amendment clarifying that the subsidies apply to state and federal exchanges. However, with this Congress, the minute you mention “ideally” and “passing” pretty much anything, you can forget it.

There is a way, though, that states with federal exchanges could keep their subsidies, and without building entirely new exchanges. They could simply say they’re establishing an exchange, create some agency to manage it, and that agency would contract with healthcare.gov to operate it. Healthcare.gov is already operating their exchanges, so really nothing would change on the ground, but they’d keep getting subsidies.

That said, leaving it up to some states to be proactive would be bad news– heck, the state of Indiana is also suing to get rid of the subsidies, and it’s hard to picture states like Texas saying yes to any part of Obamacare. So really– and this is why supporters of the law are a little nervous– the Supreme Court is the best hope for most people to keep their coverage.

Next post: Did conservatives really find proof that Congress intended to withhold some subsidies? (Spoiler: nope)