Warning: Use of undefined constant wp_cumulus_widget - assumed 'wp_cumulus_widget' (this will throw an Error in a future version of PHP) in /home/customer/www/whatifpost.com/public_html/wp-content/plugins/wp-cumulus/wp-cumulus.php on line 375
 What the DOMA decision means for same-sex health benefits
≡ Menu

What the DOMA decision means for same-sex health benefits 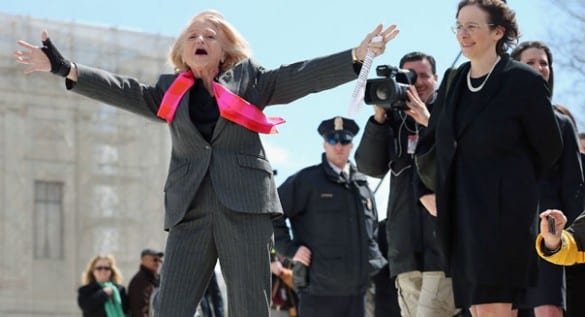 By now we’re sure you’ve heard that yesterday the Supreme Court struck down the part of the Defense of Marriage Act that had barred same-sex couples from receiving federal marriage benefits. Meanwhile, in a separate case, the Court effectively ended California’s law banning gay marriage, Proposition 8– but only because of a legal technicality. (After a lower court struck down Prop 8, the state decided not to appeal. Instead, conservative groups filed the appeal with the Supreme Court, which ruled only that these Prop 8 supporters lacked “standing”– the legal right to challenge the lower court’s decision.)

The always excellent SCOTUSblog called the two rulings “A home run, but not a grand slam for gay-marriage advocates.” After looking into how the decisions will affect health benefits for same-sex couples, we’d have to agree.

A number of federal health benefits were blocked or affected by DOMA, including:

Same-sex married couples are eligible for all of the federal benefits mentioned above… sort of.

The Supreme Court decision repealed only Section 3 of DOMA– that’s the part defining “marriage” as “between one man and one woman as husband and wife” and “spouse” as “a person of the opposite sex” for the purposes of federal law. Section 2 of the law, which says that states don’t have to recognize same-sex marriages performed in other states, still stands.

The issue here is that federal agencies have different rules as to which state they look to when deciding if a marriage is valid. Some, like the IRS and Social Security, look to the laws of the state where a couple lives (“place of domicile/residence”). Others, like immigration, look to the state where the marriage happened (“place of celebration”). What this means in practice is sort of a three-tiered status for same sex partners.

So take the tax treatment of private health benefits. Currently the IRS follows the laws of the state of residence, meaning that these “middle tier” same-sex couples will still be paying more in taxes. However, as the ACLU has noted, “There is no statute or regulation compelling this approach,” for the IRS. 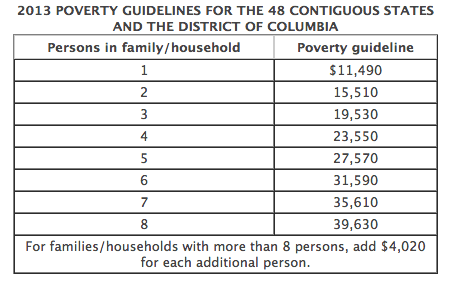 Under DOMA, a married same-sex couple would have been treated as two separate individuals applying for health benefits. Now, if they live in a state that recognizes their marriage, they’ll be treated as a single family.

Whether this is a good thing or a bad thing depends on your financial situation. The Washington Post’s Sarah Kliff explains:

A couple where both have similar earnings could stand to lose out, as combining their incomes would put them above the 400 percent federal poverty level threshold for receiving benefits […]

But there’s also a potential for benefit for couples who have relatively different salaries. For example, say one spouse is unemployed and one earns $50,000. Separate, the unemployed person would qualify for benefits, but the $50,000 earner would be ineligible, having a salary too high to qualify. Put them together in a family unit, however, and their combined earnings are now low enough to qualify both of them for a tax credit.

There are things each branch of government can do to help more same-sex couples enjoy the full benefits of ending DOMA.

President Obama: Could instruct federal agencies, like the IRS, to determine whether a marriage is valid based on the laws of the state where it took place rather than the state where the couple lives. According to the National Gay and Lesbian Task Force, some agencies can change to this “place of celebration” standard immediately, “others may have to change regulations (requiring a more lengthy process of proposing new rules and soliciting public comments) or laws.

Congress: Could pass the Respect for Marriage Act, which would fully repeal DOMA.

The Supreme Court: The next time there’s a case challenging a ban on gay marriage the Court could strike it down, instead of punting back to the lower courts. And some legal experts believe this will in fact happen, based on a close reading of yesterday’s ruling. It says that “regulation of domestic relations” is basically a state power, however, “state laws defining and regulating marriage, of course, must respect the constitutional rights of persons, see, e.g., Loving v. Virginia.”

That court case, Loving v. Virginia, ruled that a Virginia law outlawing interracial marriage was unconstitutional because it violated the equal protection clause in the Fourteenth Amendment. That’s exactly the argument that the plaintiffs made when they asked the Court to strike down Prop 8.

Theodore Boutrous, a lawyer for the plaintiffs in the Prop 8 case, told the Washington Post:

“The fact that the Court specifically noted that federal constitutional provisions trump state law if they violate the rights of citizens — and cited Loving v. Virginia in the process — is significant. We have contended all along that Loving requires restrictions on same sex marriage to be struck down for the same reasons. This plants a seed for the future.”

{For more info on how the DOMA decision will affect benefits, the National Gay and Lesbian Task Force has a bunch of great fact-sheets here.]

Next post: Gay marriage is good for public health