Warning: Use of undefined constant wp_cumulus_widget - assumed 'wp_cumulus_widget' (this will throw an Error in a future version of PHP) in /home/customer/www/whatifpost.com/public_html/wp-content/plugins/wp-cumulus/wp-cumulus.php on line 375
 What Obamacare’s critics are saying about a new study showing that it could save lives (and why they’re probably wrong)
≡ Menu 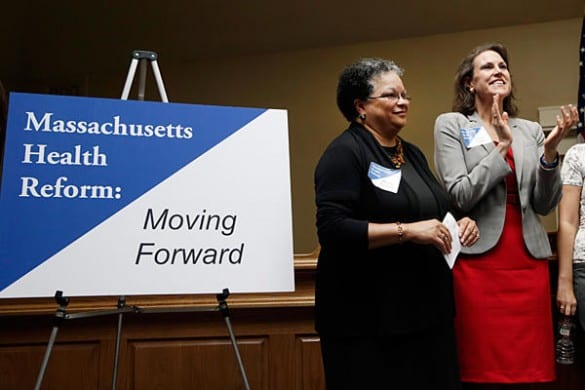 Yesterday we looked at a recent study showing that after Massachusetts passed a health reform law expanding insurance coverage, the mortality rate dropped. The authors estimate that for every 830 people who got coverage there, one death was avoided. If that same rate holds for the 20 million uninsured who are expected to get coverage under Obamacare, it will save 24,000 lives every year. So of course, conservative critics of Obamacare disagree with the results of the study. But the authors of the Massachusetts study were very, very thorough. As Adrianna McIntyre, a health policy expert and blogger puts it, “The findings aren’t bulletproof, but they’re close.”

Conservative critics have made basically three arguments about why the study should be dismissed:

1. It doesn’t prove insurance reduces mortality, because it’s not an RCT

Jim Manzi, a columnist for the conservative National Review Online, points out that the Massachusetts study is not a true randomized control trial, and therefore can’t prove that the drop in death rates was caused by Romneycare– something the researchers themselves admit. However, doing an RCT to figure out the effect of insurance on mortality is basically impossible– as we mentioned yesterday, such a study would be much too expensive and impractical. In these situations, researchers often have to make inferences based on the best available evidence. The scientific community will then test how well the explanation stands up by trying to poke holes in it.

Manzi’s attempt at hole-poking is to ask whether Massachusetts became healthier not because of expanded insurance coverage, but because more healthy people moved there. However, one of the authors of the Massachusetts study had already looked into that possibility in an earlier paper and found “no significant migration effects.”

The Incidental Economist’s Austin Frakt has a great post countering Manzi’s arguments in more detail, although his main point is this:

You can never prove causality with an observational study. At the same time, you can’t insist on an RCT for everything. You’ll die waiting. And policy decisions need to be made today. (Not to expand access to affordable coverage is as much a policy decision as to do so.) The best you can hope for, in many cases, is a substantial body of high caliber observational work that lines up largely pointing in one direction.

The Massachusetts study is probably the best evidence we have so far that expanding access to health insurance improves mortality, but as Frakt writes, the “overwhelming majority of well-conducted studies” back it up.

2. The study only shows the benefits of private insurance

Forbes’ Avik Roy, a health policy adviser to Mitt Romney during the 2012 election, admits that the Massachusetts study does seem to show that expanding coverage saves lives, but only if it’s private coverage. He contrasts the Massachusetts study with what he calls “mountains of clinical evidence” that Medicaid doesn’t make people healthier.

However, as we’ve pointed out before, while there are a bunch of studies showing that Medicaid is associated with things like longer hospital stays and greater risk for complications after surgery, that doesn’t mean that Medicaid is the cause. All they show is that Medicaid patients have something in common that leads to worse health outcomes. It could be Medicaid, but an even more likely explanation is something called “selection bias”:

The better studies have cleverly attempted to address this selection bias, and found that Medicaid saved lives and improved health outcomes.

In response, Medicaid opponents like Roy typically point to one study in Oregon– an actual randomized control trial– showing that Medicaid had no significant effect on certain indicators of health like high blood pressure, cholesterol levels, or blood sugar levels for diabetics. The key words there are “significant effect.” The study did in fact show a major drop in all those markers, but the size of the sample group was so small that it would be almost impossible for any results to be statistically significant. (It was also much too small to detect the change in mortality that was observed in Massachusetts.)

The New Republic’s Jonathan Cohn sums it up:

[Health scholars] thought it would take a study with a much larger population, and a longer time to observe results, for real changes in health outcomes to show up. That’s precisely what the new Massachusetts study does, even though it’s not a perfectly random study.

3. Obamacare might reduce mortality slightly, but the cost is too high

Michael Cannon, of the libertarian Cato Institute says that even if Obamacare saves lives, the cost is too high to justify it. Cannon estimates that Romneycare spent just over $4 million per life saved, which, as he points out, the World Health Organization would classify as “not cost effective.”

There’s a lot of silliness packed in there. For starters, his estimate is likely too high, since it’s based on premiums for employer-sponsored plans, which tend to be better and thus more expensive. Harold Pollack’s own back-of-the-envelope calculation is $3.3 million per life saved, and he points out that interventions that almost no one complains about– like automobile child restraints and child-resistant cigarette lighters– have a similar price tag. He writes, “$3.3 million is fairly reasonable by the standard benchmarks used to evaluate widely-accepted public health interventions.”

The WHO standard for cost-effectiveness, on the other hand, is not. They consider anything more than three times a country’s per capita GDP to be “not cost-effective,” meaning that in the U.S. anything that costs more than about $150,000 per-life-saved would not be cost-effective. By that standard we’d have very few public safety laws.

But the most important objection to Cannon’s argument (and really to the whole debate in general) is that there are tons of other benefits to expanding health coverage. Bill Gardner, a health services researcher at Ohio State University puts it well:

Health insurance gives you access not just to live saving care, but also to the rest of medical care, including things like hip replacements that allow you to walk and run, and free you from chronic pain. Insurance also protects your family from financial ruin. It’s the total contribution of health insurance to well-being that needs to be considered in deciding whether we should support universal coverage. If Cannon is going to place a value on being insured, he needs to consider the total benefit a person experiences from having health insurance, not just the chance that it will save her life.

In other words, it’s great news that Obamacare may prevent thousands of deaths every year, but it’s only one benefit of expanding access to affordable health coverage.

Next post: What’s going on with the VA? Part 1: The waitlist scandal

Previous post: A recent study in Massachusetts shows that Obamacare could save thousands of lives