Warning: Use of undefined constant wp_cumulus_widget - assumed 'wp_cumulus_widget' (this will throw an Error in a future version of PHP) in /home/customer/www/whatifpost.com/public_html/wp-content/plugins/wp-cumulus/wp-cumulus.php on line 375
 What is the national debt anyways?
≡ Menu

What is the national debt anyways? 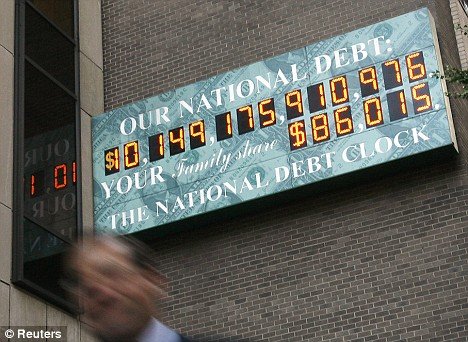 Since we’ve been talking about the national debt a lot lately, we thought a quick primer might be helpful.

What is the national debt?
When the U.S. government spends more than it collects in taxes, it has to borrow the difference.  It borrows money by issuing treasury bonds– it’s basically the same as taking out a loan.  The government gets cash for each bond, which it has to pay back with interest at a later date.  The interest rate is important– just like you can get a loan with a lower interest rate if you have good credit and a high-paying job, the interest rates on treasury bonds reflect how creditworthy people feel the government is.  If it looks like government spending is out of control and we’re racking up a ton of debt, or if U.S. economy starts to decline, investors will worry that we won’t be able to pay them back when it comes time to cash in their bonds.  And so, interest rates on these bonds will go up to entice investors to take that extra risk.

Interest on the debt
So… with conservative politicians freaking out about our “massive” national debt and “out of control spending”, you’d expect that interest rates on treasury bonds would be sky-high, right?  Turns out that the interest rate on a ten-year Treasury bond these days is really low: just over 3%.  Paul Krugman (if that name doesn’t ring any bells, he’s a liberal Nobel prize winning economist, who writes for the New York Times) says that this evidence that the market isn’t worried about our ability to repay our long term debt, and if the market isn’t worried then we shouldn’t be worried either.  We should keep spending to stimulate the economy and stave off another Depression.

There are a couple counter-arguments to this:

If either of these are the case, the thinking goes, we should reduce our spending now, because eventually investors are going to realize that our spending is out of control and make us pay later.

The Democratic position
But there is a counter-counter-argument, which is that the market for Treasury bonds is gonna do what it’s gonna do, regardless of whether we borrow a little more money in the short term.  In that case, we should:

This is the position of most Democrats.

The Republican position
On Sunday Senator Jon Kyle (R-AZ) argued for extending the Bush tax cuts for the wealthiest Americans, regardless of their impact on the deficit.  At the same time, he and other Republicans were blocking the extension of unemployment benefits because it would add to the deficit.  He explained (if you could call it that) his position as follows:

“Surely Congress has the authority, and it would be right to — if we decide we want to cut taxes to spur the economy, not to have to raise taxes in order to offset those costs. You do need to offset the cost of increased spending, and that’s what Republicans object to. But you should never have to offset cost of a deliberate decision to reduce tax rates on Americans.”

Not sure what kind of math he’s using, but spending increases and tax cuts have the exact same effect on the deficit.  And because the Bush tax cuts for the wealthy were so big, the effect on the deficit was enormous.  Those tax cuts combined with the economic downturn (which the spending increases on unemployment benefits and aid to the states is supposed to help fix) make up nearly all of the projected deficit over the next ten years: 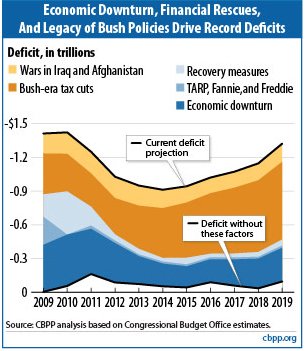 Perhaps it’s time we stop being a nation of wanna-be’s, and figure out that tax cuts for the wealthy are not going to be tax cuts for you and me.

Next post: Great graph about health care and debt