Warning: Use of undefined constant wp_cumulus_widget - assumed 'wp_cumulus_widget' (this will throw an Error in a future version of PHP) in /home/customer/www/whatifpost.com/public_html/wp-content/plugins/wp-cumulus/wp-cumulus.php on line 375
 Vermont takes another step towards single payer
≡ Menu 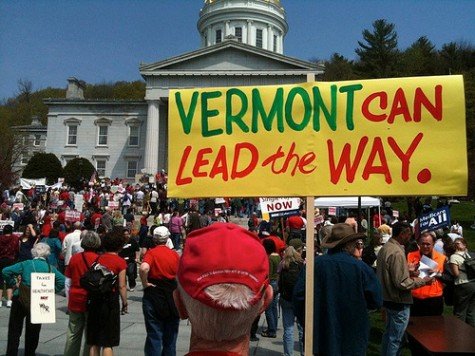 The bill won’t create a new health care system overnight— instead it sets up a planning process to create a “single payment” system called Green Mountain Care (GMC). The general framework is to bring as many health care payers into one system as possible:

Also, the bill doesn’t spell out some of the most important details: how it will be paid for, what benefits will be covered, and what copays and deductibles will be included. Instead, those questions will be answered by a five-member board, in consultation with the governor and the state legislature.

For more on the Vermont bill, Boston University professor of health law Kevin Outterson is your guy. He has a five part series on the excellent health care blog, The Incidental Economist, explaining the bill here, and a great interview with The Washington Post’s Ezra Klein here.

The Senate’s Bernie Sanders (I-Verm.) and the House’s Jim McDermott (D-Wash.) have introduced bills that would give states guidelines and establish minimum standards to establish single-payer health care programs.