Warning: Use of undefined constant wp_cumulus_widget - assumed 'wp_cumulus_widget' (this will throw an Error in a future version of PHP) in /home/customer/www/whatifpost.com/public_html/wp-content/plugins/wp-cumulus/wp-cumulus.php on line 375
 Understanding Japan’s nuclear crisis: the basics of radiation and health
≡ Menu

Understanding Japan’s nuclear crisis: the basics of radiation and health

We’ve been following the nuclear crisis in Japan over the past week, and noticed that it’s easy to get confused by the flood of information about radiation and human health. With poison control centers on the west coast already fielding calls about protection from radiation (and even some cases of Americans accidentally overdosing on anti-radiation poisoning drugs) despite the almost nonexistent risks, we figured it was time for a brief guide to understanding the health effects of radiation coming from the plant.

The damaged Fukushima reactor complex is spreading radiation into the environment by two distinct ways:

Also, unless you’re a nuclear scientist the numbers by themselves aren’t that helpful, so here’s a chart putting them in context, from Next Big Future (via GOOD Magazine): 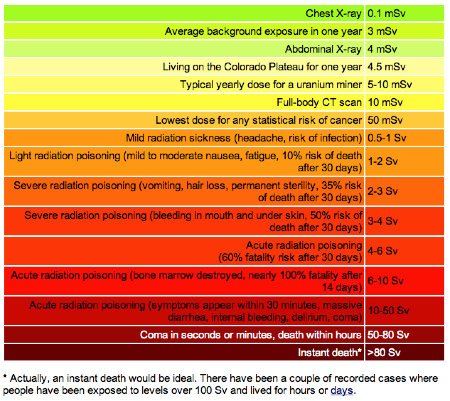 [XKCD also has an incredible graphic putting the radiation figures in context– it’s too big for us to post here, but you can view it on their site.]

The other thing to keep in mind:

For this sort of radiation injury, the health effects occur after a certain cumulative threshold of radiation exposure. Putting it more simply, the radiation comes at a certain rate per hour (how fast the faucet is running); the problems come when a certain volume of radiation is absorbed (buckets of various sizes are filled).

Dr. Jonathan Golob, writing in the Seattle Stranger, made a chart of how many days you would have to spend at one of the places around the damaged nuclear plant to receive enough radiation to cause each of these health effects:

(For the highest recorded radiation levels—in the helicopter only 300 feet above the reactor—I’ve included the time of exposure necessary for a health effect in hours as well, as days are too long of a measure. Likewise, for Tokyo—where values have hovered around twice the level of background radiation, days is an absurd measure; instead I’ve calculated in years.)

Radioactive Isotopes
These are the tiny pieces of radioactive fuel and waste that got released into the air when the buildings housing the reactors were damaged. These pieces also give off radiation, but a much lower quantity. The potential danger is that large amounts of these particles would be absorbed into a person’s body, and give off a chronic but low level radiation that increases the likelihood of that person getting cancer.

But they get dispersed more and more the further they travel away from the site of the reactors. By the time this “plume” travels thousands of miles across the Pacific and reaches the west coast, these tiny pieces are so spread out that even in a worst case scenario there is no health risk.

According to state and federal officials in California:

The doses of radiation that a person normally receives from rocks, bricks, and the sun are 100,000 times the dose rates detected at a monitoring station in California and another in Washington state.

Areas near damaged reactor will receive more concentrated amounts, but wind and weather should push much of it towards the Pacific ocean, away from population centers like Tokyo. Even in a reasonable worst case scenario– explosion and meltdown, combined with bad weather– only people closer than 30 km. (about 18 miles) would be in danger. (When asked if there would be any risk of health problems further away, Britain’s chief science advisor in the UK replied, “The answer is unequivocally no. Absolutely no issue. The problems are within 30 km of the reactor.”)

Radioactive particles can also be spread by food produced in the immediate area, particularly from higher up the food chain, which was what happened at Chernobyl:

The great tragedy of Chernobyl was an epidemic of thyroid cancer among people exposed to the radiation as children — more than 6,000 cases so far, with more expected for many years to come. There is no reason for it to be repeated in Japan.

The epidemic in Chernobyl was preventable and would probably not have happened if people had been told to stop drinking locally produced milk, which was by far the most important source of radiation. Cows ate grass contaminated by fallout from the reactors and secreted radioactive iodine in their milk.

It helps that Japan produces little dairy, and imports far more food than it exports. They’ve already halted shipments of milk from the Fukushima and shipments of spinach from the four provinces surrounding the plant after tests showed radiation levels 27 higher than the accepted limit. (Although, without knowing the accepted limit it’s hard to say if 27 times higher is a health risk. Japanese officials say that it’s not.)

Also, most radioactive isotopes being released have either very long or very short half lives, or chemically inert Noble gases. Radioactive iodine has a half life of about 8 days, which means that in about two months, nearly all the risk is gone. On the other hand, Radioactive Cesium and Strontium were also spread by Chernobyl and both have very long half lives (about 30 years). That can actually be a good thing though.  Dr. Golob explains why no studies have shown an increased risk of cancers or other negative health effects from exposure to these two isotopes after Chernobyl:

Our bodies are quite good at dealing with infrequent, long-term radiation damage—able to repair DNA if provided enough time between hits. Strontium and Cesium both have long half-lives (about 30 years), meaning they decay very infrequently—perhaps giving out cells enough of a chance to repair the damage before injury occurs.

Again, even in a worst case scenario, everything we’ve seen says that the risk of health problems would be within 20 miles of the reactor. People living in that part of Japan are right to be concerned, but there is no health risk to the United States.

How to Help
Meanwhile, many people are wondering what they can do to help victims of the tsunami. GOOD Magazine put together a great list of ways to help, although most of it was for what to do in the immediate aftermath. It’s a little unclear how much help Japan will need from international aid organizations in the long term, since the country is better equipped to deal with a crisis like this than poorer nations which have faced similar disasters. But donating to organizations like the Red Cross Red Crescent and Doctors Without Borders is always a good idea, so that once their work is done in Japan, they can continue to help in other parts of the world.

Yesterday officials issued a warning that infants should not drink tap water, after a purification plant detected radioactive iodine that exceeded the standards for infants.  Today, levels “had fallen by more than half in the last 24 hours and now tested below the country’s stringent maximum for infants.”

The reports introduced yet another measure of radiation– the Becquerel– which Dr. Jonathan Golob explains:

A Becquerel is a decay per second. So, when a news report says aliter of water in Tokyo has 210 Becquerels of radioactive iodine, we can translate that to a liter of water (about a quart) as having 210 radioactive Iodine atoms decaying each second.

not all decays are equal. Some atoms release far more energy during a decay. Both the kind and amounts of energy released per decay—as well as how many decays in a certain amount of time—all determine the effect of the radiation.

The Wall Street Journal also has a good on article explaining the different units used to measure radiation emissions.

Also, for a great explanation of what happens inside a nuclear reactor and what’s causing the problems in Japan, this video is really helpful:

And we agree with Ezra Klein: “This guy just has the best voice (not to mention hair). I want him to read me bedtime stories.”

Next post: Why won’t the Senate confirm Donald Berwick?