Tons of good news about Obamacare this week 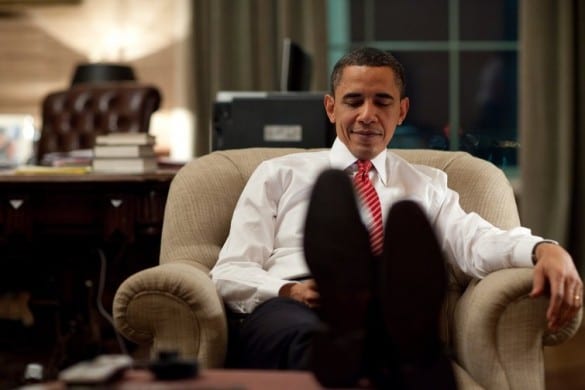 Last week we mentioned that the seven million signups on the Obamacare exchanges didn’t tell us for sure how well the law is working, although it is a very good sign. This week, there was even more evidence indicating that premiums will remain low next year and the uninsurance rate is dropping thanks to the new law.

Over eight million people signed up through the exchanges

Although officially the last day to enroll was March 31, the administration extended a grace period until April 15 for those who had problems finishing their applications. Apparently nearly a million people took advantage of this extension. This graph shows just how impressive the last minute surge was: 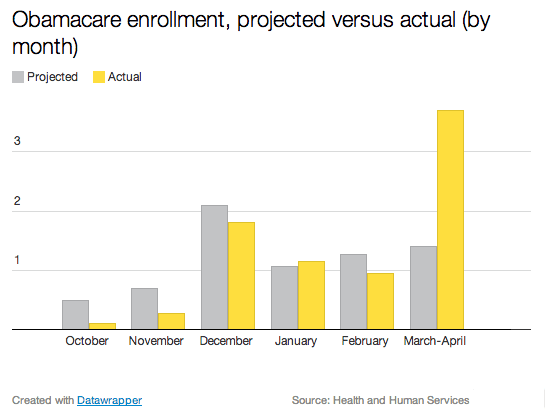 There were three times more signups in Obamacare’s final month (plus grace period) than the White House expected. Over 217,000 people signed up on March 31 alone– that’s more than double the number of signups for the entire month of October.

The caveat here is that not all of the eight million people who enrolled will pay their first month’s premium on time. According to Charles Gaba, who runs the excellent site ACAsignups.net, around 90% to 95% of enrollees have been paying their premiums by the due date, which means the final tally of people who are covered through an Obamacare exchange plan will be closer to 7 or 7.5 million. Still that’s pretty impressive considering that after the website launch mess only 6 million were expected to enroll.

That’s according to Gallup polling data from interviews with more than 20,000 adults done between March 4 and April 14. And because the survey started before the March surge really got going the final tally will likely be even higher. Still even these early numbers show a drop in the uninsurance rate from 18% around this time in 2013 to just 12.9% this month– the lowest rate since Gallup began doing this survey in 2008.

The mix of young and old looks good

One worry has been that fewer young people would sign up than insurers expected, causing premiums to skyrocket next year. So in another bit of good news, the White House announced that many of the people signing up at the last minute were young people, bringing the percentage of enrollees between the ages of 18 and 34 up to 28%. That’s still less than the supposed target of 40%, which is the percentage of people who are eligible for coverage on the exchanges between 18 and 34 years old. Most media coverage of the mix of enrollees has focused on that 40% target. But here’s the thing, writes The New Republic’s Jonathan Cohn:

Insurance companies didn’t expect young people to sign up in proportion to their numbers in the population. They knew participation would be a bit lower and they set premiums accordingly. Only company officials know exactly what they were projecting—that’s proprietary information—but one good metric is the signup rate in Massachusetts, in 2007, when that state had open enrollment for its version of the same reforms. According to information provided by Jonathan Gruber, the MIT economist and reform architect, 28.3 percent of Massachusetts enrollees were ages 19 to 34, a comparable age group. 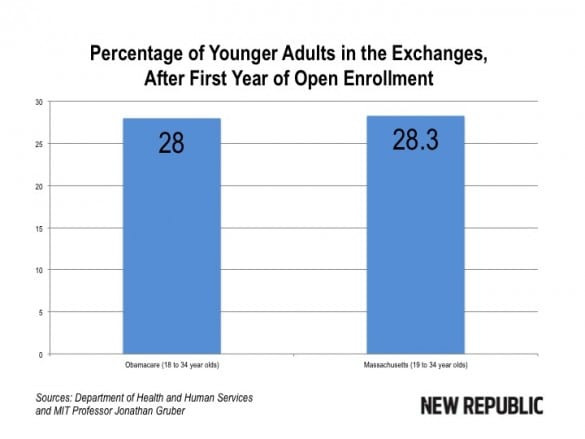 The age mix for Obamacare and the Massachusetts reform seven years ago are virtually identical. Since it’s certain that insurers were look very closely at Massachusetts’ experience when they set their premiums, the fact that Obamacare had the same age mix is a very good sign for next year’s premiums. And in fact…

From the USA Today:

Statisticians working with insurers to project next year’s insurance premium rates say they expect to see an average increase of about 7%, well below the feared double-digit increases making recent headlines.

[Dave] Axene, [a fellow with the Society of Actuaries] says that as insurers dig through the new health exchange enrollees to figure out their ages and health conditions to determine next year’s premiums, he expects an overall increase of 6% to 8.5%. He bases that on work he and others within the society have done with insurance clients. Before the Affordable Care Act, premiums rose an average of 7-10% a year.

In other words, even though insurers are still getting used to the new system, premiums will likely rise by less than they did before Obamacare.

Just keep in mind these are national averages though

As we noted in our last post, every state has its own risk pool (and some states have broken the insurance market to even smaller regions)– which means insurers will base their premiums on the mix of young and old who sign up in that state (or region). It’s a good sign that nationwide the percentage of young people mirrors Massachusetts, but that’s probably hiding variation at the state level. Some states will have fewer young people than expected while others will have more, so how much your premium changes next year will depend a lot on where you live.

Similarly, Obamacare’s effect on the rate of uninsured varies widely from state to state as well. Currently 24 states are not participating in the Medicaid expansion, meaning that residents making less than 100% of the poverty line still can’t get affordable coverage there. And in many states that opposed Obamacare there has been little outreach to make people aware of their new coverage options. That same Gallup poll data we mentioned above shows that the uninsured rate is falling three times faster in states that expanded Medicaid and built their own exchange.

In an excellent post (definitely check out the whole thing here) Ezra Klein points out that there’s a huge difference between Obamacare in California, which has done everything it could to make the law work better, and Obamacare in Mississippi, which has done the opposite.

Right now it’s too soon to say exactly how Obamacare will play out in every part of the country. Overall though the news has been overwhelmingly positive.

Next post: Proposed rules from the White House could trigger more insurance cancellations. And that’s probably a good thing.

Previous post: Is Obamacare working? Here’s what we know so far