Warning: Use of undefined constant wp_cumulus_widget - assumed 'wp_cumulus_widget' (this will throw an Error in a future version of PHP) in /home/customer/www/whatifpost.com/public_html/wp-content/plugins/wp-cumulus/wp-cumulus.php on line 375
 The U.S. pays its doctors more… a lot more
≡ Menu

The U.S. pays its doctors more… a lot more

A new study by two Columbia researchers looked at doctor fees in the U.S. compared to other industrialized countries, and found that- surprise- we pay a lot more:

The study, being published Thursday in the journal Health Affairs, found that the incomes of primary care doctors and orthopedic surgeons were substantially higher in the United States than in other countries. Moreover, it said, the difference results mainly from higher fees, not from higher costs of the doctors’ medical practice, a larger number or volume of services or higher medical school tuition.

“Fees paid by public payers to orthopedic surgeons for hip replacements in the United States are considerably higher than comparable fees for hip replacements in other countries,” the authors found, “and fees paid by private insurers in the United States for this service are double the fees paid in the private sector elsewhere.” 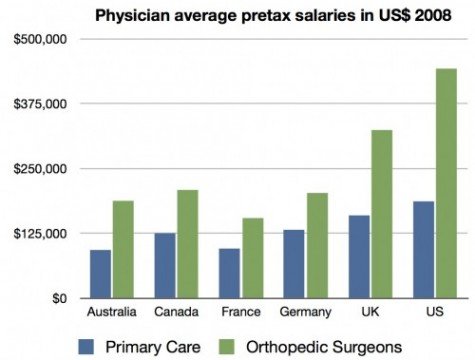 He notes that U.S. primary care doctors aren’t paid that much more than in other countries, although our orthopedic surgeons are making way more. He also points out that the UK surgeons have the second highest salaries, despite the fact that they’re government employees. He concludes:

I’d also like to caution those who will take these data and assume they can fix the costs of the health care system just with physician salaries. Yes, they’re high, and yes, they should be justified to remain so, but they’re still not the main cause of our health care spending. physician salaries accounted for 7% of spending. We’re not going to cut that to zero, obviously. Even if we make substantial reductions, our health care spending will be enormous, and it won’t “bend the curve.” Solutions need to be holistic.

Next post: Health costs rise, coverage falls… but there is some good news