Warning: Use of undefined constant wp_cumulus_widget - assumed 'wp_cumulus_widget' (this will throw an Error in a future version of PHP) in /home/customer/www/whatifpost.com/public_html/wp-content/plugins/wp-cumulus/wp-cumulus.php on line 375
 The three most (well, really only) interesting healthcare moments in the Republican debate
≡ Menu

The three most (well, really only) interesting healthcare moments in the Republican debate 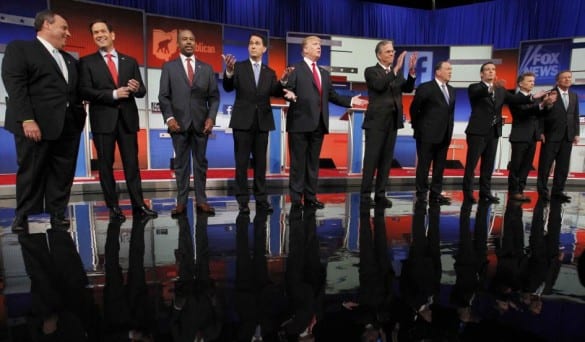 For the most part, in last week’s GOP primary debates there wasn’t much we haven’t already heard about healthcare. Candidates promised to repeal Obamacare, none offered a plan to replace it. They said they would defund Planned Parenthood (and of course none pointed out that the organization isn’t actually selling baby parts). Former Arkansas governor and Fox News host Mike Huckabee repeated Mitt Romney’s wildly misleading claim from the 2012 election that Obamacare robs $700 billion from Medicare. In the undercard debate, Louisiana governor Bobby Jindal cited the same flawed Oregon Medicaid study we’ve covered before.

There were, however, three interesting moments.

How little Obamacare came up

The most surprising part of the debate was how little the candidates had to say about Obamacare. As Charles Gaba, writing for healthinsurance.org pointed out, over the course of four hours of debate, the ACA got about three minutes of airtime.

This is a party that spent five years casting vote after vote after vote to repeal Obama’s signature domestic policy accomplishment. Just two years ago, Republicans shut down the government in an attempt to defund the law. The Tea Party itself was born out of calls to end Obamacare.

But last night, candidates mentioned Obamacare exactly six times during the course of a two-hour debate. […] The near-complete absence of Obama’s health overhaul is remarkable.

Debate moderator Bret Baier asked Trump to explain why he used to support “a single-payer system, a Canadian system” for healthcare, and why he’s since changed his mind.

It sounds crazy, but it’s true; in his 2000 book, The America We Deserve, Trump did come out strongly in favor of single-payer. He writes:

“We must have universal healthcare. I’m a conservative on most issues but a liberal on this one. We should not hear so many stories of families ruined by healthcare expenses.

And as for what universal care would look like:

The Canadian plan also helps Canadians live longer and healthier than Americans. There are fewer medical lawsuits, less loss of labor to sickness, and lower costs to companies paying for the medical care of their employees. […] We need, as a nation, to reexamine the single-payer plan, as many individual states are doing.

In this debate, Trump walked back his past support for single-payer (after a rambling digression on his opposition to the Iraq war) saying:

As far as single payer, it works in Canada. It works incredibly well in Scotland. It could have worked in a different age, which is the age you’re talking about here.

Then he makes an interesting suggestion:

What I’d like to see is a private system without the artificial lines around every state. I have a big company with thousands and thousands of employees. And if I’m negotiating in New York or in New Jersey or in California, I have like one bidder. Nobody can bid.

Whether or not this is a good idea depends on what you think he meant.

Currently insurance for individuals and small to medium-sized businesses is regulated by individual states (big corporations are usually self-insured, meaning they’re regulated under the federal ERISA law); every state has different requirements, meaning that a plan sold in one state generally can’t be sold in others. Vox’s Matthew Yglesias thinks Trump is saying he wants to have the federal government regulate insurance. The Affordable Care Act did this somewhat– it set basic guidelines for plans (they can’t deny coverage based on pre-existing conditions, they can’t have lifetime or annual limits, etc.), but states are in charge of hammering out the details and are free to set their own standards above and beyond what Obamacare requires. Yglesias believes Trump wants to take regulation out of states’ hands altogether, although what exactly that would mean for plans would depend on the specific regulations.

We’re almost positive that’s not what Trump has in mind. His campaign website doesn’t mention any policy positions, but in his more recent 2011 book, Time to Get Tough, he recommends allowing people to “purchase health-care plans across state lines”, and a recent Forbes interview with a campaign spokesperson confirms that position. This is something Republicans have been pushing for a while– states would still be in charge of regulation, but insurers could sell plans approved by any one state to the rest of the country.

Ezra Klein explained in 2010 why this is a terrible idea:

Citibank wrote an absurdly pro-credit card law, the legislature passed it, and soon all the credit card companies were heading to South Dakota. And that’s exactly what would happen with health-care insurance. The industry would put its money into buying the legislature of a small, conservative, economically depressed state. The deal would be simple: Let us write the regulations and we’ll bring thousands of jobs and lots of tax dollars to you. Someone will take it. The result will be an uncommonly tiny legislature in an uncommonly small state that answers to an uncommonly conservative electorate that will decide what insurance will look like for the rest of the nation.

When the Congressional Budget Office scored a bill back in 2005 that would have allowed insurers to sell across state lines, it found that the legislation wouldn’t change the total number of uninsured, but it would make insurance cheaper for the healthy and more expensive for the sick, so fewer people that really need coverage would get it.

It’s also a little unclear whether insurers even want to enter new states. A 2012 paper from Georgetown University researchers looked at three states that did open their markets to plans from other states; none of the three saw out-of-state carriers come in. The study’s authors said that the biggest barrier is not state regulation, but building a provider network that’s attractive enough to get patients to sign up. If you’re a new plan, that’s going to cost money, making premiums more expensive.

(We should also point out that whatever Trump is proposing, it wouldn’t affect his company. The Trump Organization has 22,000 employees, so it’s almost certainly self-insured and regulated by the federal government– the issue of “artificial lines around every state” wouldn’t apply.)

UPDATE 8/31/15: The New York Times Upshot blog has more on the problems with GOP plans to let insurers selling across state lines.

Like Trump, Ohio governor John Kasich was also questioned about his support for a health program Republicans dislike: his decision to expand Medicaid under the Affordable Care Act. However, unlike Trump, rather than waffle or try to walk back his decision, Kasich stood firm:

“Well, first of all, Megyn, you should know that — that President Reagan expanded Medicaid three or four times.

Secondly, I had an opportunity to bring resources back to Ohio to do what?

To treat the mentally ill. Ten thousand of them sit in our prisons. It costs $22,500 a year to keep them in prison. I’d rather get them their medication so they could lead a decent life.

Secondly, we are rehabbing the drug-addicted. Eighty percent of the people in our prisons have addictions or problems. We now treat them in the prisons, release them in the community and the recidivism rate is 10 percent and everybody across this country knows that the tsunami of drugs is — is threatening their very families.

So we’re treating them and getting them on their feet. And, finally, the working poor, instead of them having come into the emergency rooms where it costs more, where they’re sicker and we end up paying, we brought a program in here to make sure that people could get on their feet.

And do you know what?

Everybody has a right to their God-given purpose.

And finally, our Medicaid is growing at one of the lowest rates in the country. And, finally, we went from $8 billion in the hole to $2 billion in the black. We’ve cut $5 billion in taxes and we’ve grown 350,000 jobs.”

It was pretty incredible to hear a Republican presidential candidate defend Medicaid so forcefully (although he didn’t say what he would do about Medicaid as president). It’s also one reason why he almost certainly won’t get the nomination.

[UPDATE 7/14/15: In her question to Kasich, Megyn Kelly said that Ohio’s Medicaid expansion is over budget, costing taxpayers an additional $1.4 billion in the first 18 months. The expansion itself did cost more than planned because 150,000 more low-income Ohioans signed up than the state had anticipated. However, Ohio’s spending on its entire Medicaid program was $2 billion less than it had projected, despite these new enrollments.]

Next post: Can healthcare be cured of racial bias?