Warning: Use of undefined constant wp_cumulus_widget - assumed 'wp_cumulus_widget' (this will throw an Error in a future version of PHP) in /home/customer/www/whatifpost.com/public_html/wp-content/plugins/wp-cumulus/wp-cumulus.php on line 375
 The Supreme Court upholds Obamacare subsidies! Here’s why it did.
≡ Menu

The Supreme Court upholds Obamacare subsidies! Here’s why it did. 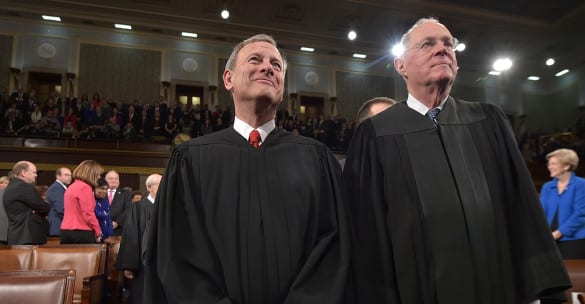 In a 6-3 decision, the Supreme Court ruled in favor of the government in King v. Burwell, a lawsuit that had threatened to take the Affordable Care Act’s subsidies away from more than 6 million people. Our prediction from yesterday was correct— the court upheld the subsidies, but in a way that limited the power of the executive branch. Here’s a quick breakdown of key points of the decision and what it means going forward.

For ACA supporters, the scariest thing about the case was the Court’s decision to hear it in the first place. There are typically only two reasons the Supreme Court will agree to take on a case: (1) if there are conflicting opinions in the lower courts; or (2) the lower courts are in agreement, but some of the justices think the case may have been wrongly decided (at least four of the nine justices have to vote to accept a case). In King v. Burwell, the Fourth Circuit court had upheld the subsidies, and other cases challenging the subsidies were still making their way through the legal system, so it seemed like the only reason for the Supreme Court to hear this case was if it was considering overturning the lower court’s decision.

What many people missed though was the possibility that some justices might have an issue with why the Fourth Circuit upheld the subsidies, not the outcome.

The Fourth Circuit decision relied on a precedent set in the 1984 case Chevron v. Natural Resources Defense Council. According to the “Chevron doctrine,” if the text of a law is unclear, courts should defer to the agency in charge of implementing it, as long as the agency’s interpretation is “reasonable.” In this case, the IRS was providing subsidies on the federal exchanges (subsidies come in the form of tax credits, which is why the IRS is involved); the Fourth Circuit found that to be a reasonable reading of the law, and deferred to the agency’s decision.

However, as we mentioned in previous posts, both Justices Roberts and Kennedy had expressed concerns with this setup. The idea behind the Chevron doctrine is that ambiguous wording implies that Congress wants the agency implementing the law to fill in the gaps. But according to Roberts and Kennedy, there may be some cases where an ambiguous provision is so important that if Congress had wanted an agency to make the call, it would have said so directly. In the King v. Burwell opinion, Roberts writes:

This is one of those cases. The tax credits are among the Act’s key reforms, involving billions of dollars in spending each year and affecting the price of health insurance for millions of people. Whether those credits are available on Federal Exchanges is thus a question of deep “economic and political significance” that is central to this statutory scheme; had Congress wished to assign that question to an agency, it surely would have done so expressly.

Instead says Roberts, it is “our task”– meaning the courts’ — to determine the correct reading.” That didn’t necessarily mean that the IRS was wrong though.

The case against Obamacare was ridiculous

All of the justices agreed that it was up to the courts, not the IRS, to determine whether Congress intended to provide these subsidies. What split the ultra-conservative justices from the majority was how to figure out Congress’s intent.

For the majority that meant, well, figuring out Congress’s actual intent by reading the entire law and what it was meant to accomplish. The decision is long, but it can really be summed up in this one sentence from Roberts:

“Congress passed the Affordable Care Act to improve health insurance markets, not to destroy them.”

The conservatives’ interpretation, meanwhile, took what’s basically a typo in the law and pretend that it’s exactly what Congress intended. As others have pointed out, it’s the judicial equivalent of George Costanza winning Trivial Pursuit because the card says “Moops.”

We can guarantee that this won’t be the last lawsuit involving the Affordable Care Act. One case challenging the constitutionality of the Independent Payment Advisory Board, an agency created by the ACA to come up with ways for Medicare to save money, was dismissed as “unripe”– the board hadn’t even been appointed yet– but we’re sure we’ll see it before the courts eventually. But even if the plaintiffs win that one, the effect would be similar to the court’s ruling in the Hobby Lobby case– it might change or scrap a useful Obamacare provision, but the overall structure of the law would remain intact. If there were any viable legal case to take down the entire law, conservatives would have found it by now.

It’s a bittersweet moment. On the one hand, this is probably the last time we’ll have to worry about the Supreme Court taking health coverage away from millions of Americans; but then again, it also might be the last time we get to use this picture: 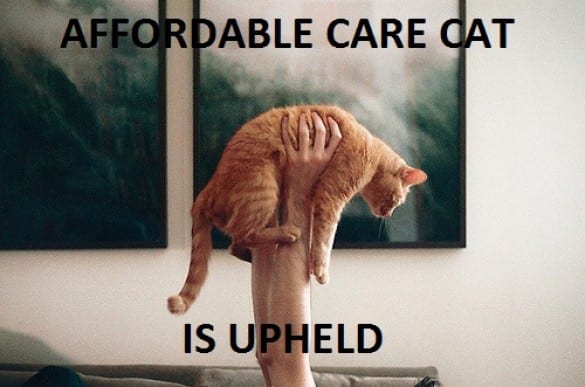 Next post: The biggest insurers in the U.S. are merging- and in *some* places that could be a good thing

Previous post: All the possible ways the Supreme Court could rule in its upcoming Obamacare decision