Warning: Use of undefined constant wp_cumulus_widget - assumed 'wp_cumulus_widget' (this will throw an Error in a future version of PHP) in /home/customer/www/whatifpost.com/public_html/wp-content/plugins/wp-cumulus/wp-cumulus.php on line 375
 The Supreme Court gave itself another chance to gut Obamacare, but will it?
≡ Menu

The Supreme Court gave itself another chance to gut Obamacare, but will it? 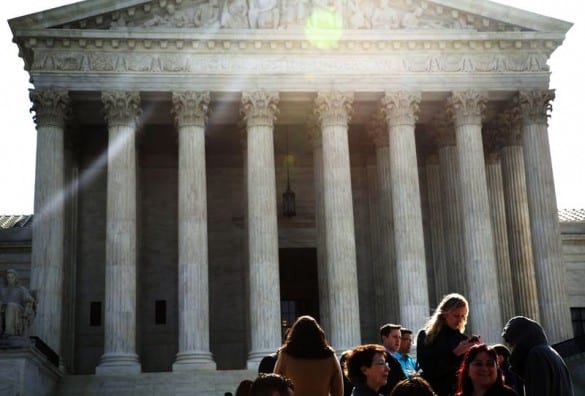 We think the Supreme Court might be trolling us. Just two days after we wrote about some silver linings for Obamacare supporters in the wake of the midterms, the justices unexpectedly announced that it would hear King v. Burwell, a case that has the potential to cripple the law.

What is the case about?

It’s about whether or not the government has the authority to help people pay for premiums in the 34 states that didn’t set up their own exchanges. The section of the Affordable Care Act defining who’s eligible for subsidies refers to people enrolled “through an Exchange established by the State” — there’s no mention of federal exchanges.

The IRS has said even though the law doesn’t specifically mention the federally-run exchanges, Congress obviously meant for subsidies to be available everywhere, so it provided them on all the exchanges (the subsidies technically come in the form of a tax credit, that’s why the IRS is involved). But conservative scholars, like Michael Cannon and Jonathan Adler claim that Congress intentionally chose to keep federal exchanges from getting subsidies as sort of a punishment to coerce states into setting up their own. The IRS, they say, is acting illegally and without Congressional approval by providing these subsidies– thus the lawsuit.

Which side has the stronger argument?

Legally (i.e., ignoring how the political affiliation of judges might affect their decision), this should be a slam dunk for the government.

Unlike the 2012 suit over the individual mandate, in this case the Court won’t be deciding whether the subsidies are constitutional– everyone agrees that they are. Instead, the justices will be trying to determine the intent of Congress: did it intend to withhold subsidies from enrollees in some states?

In the real world, the answer is clearly no. As we’ve pointed out before, pretty much everyone– the people who wrote the law; the journalists who reported on the law; the Congressional Budget Office, who estimated the cost of the law; the states, who had to decide whether to join the federal exchange or build their own– assumed that subsidies would be available regardless of whether a state set up its own exchange. Heck, even the conservative lawyers now suing to eliminate the subsidies admitted in an earlier case that Obamacare couldn’t function without subsidies, writing:

The plaintiffs’ argument is that none of that should be considered– that the courts should look only at the text of the law– but even then, they’re on shaky ground. To make the case that Congress intended to limit subsidies to just state-run exchanges, you have to ignore everything else in the law, as Tom Goldstein, founder of SCOTUSBlog, lays out here:

Looking at the law as a whole, the most you can reasonably argue is that Congress’s intent was unclear. However, as University of Michigan law professor Nicholas Bagley explains, when a law is ambiguous “it’s up to the agencies charged with interpreting the ACA to resolve that ambiguity. The tie goes to the government.”

Why Obamacare supporters should be worried

Four justices have to agree that the Supreme Court should hear a case, and just 1.1% of cases put before the court are taken up. It typically only gets involved in cases like this one only if (1) there’s a split in the lower courts or (2) if the justices are considering overturning a decision.

In the lower courts there have been two cases dealing with the legality of the subsidies: Halbig v. Burwell and King v. Burwell. In King, the 4th Circuit Court ruled that subsidies should be legal in all 50 states, and in Halbig the full D.C. Circuit Court was also widely expected to rule the same (overturning an earlier ruling by a panel of three judges). With a split in the lower courts unlikely at least in the near future, it would seem that at least four of the justices are considering ruling against the subsidies.

A ruling in favor of the plaintiffs would be a huge blow to the law. Kaiser Family Foundation vice president Larry Levitt estimates that 4.6 million people in 34 states would immediately lose their subsidies. The average monthly premium across the country would go up 400% from $82 to $346, and relatively poor states would see an even bigger hike– in Mississippi, for example, the average monthly premium would jump from $23 to $438, an increase of almost 2000%.

And as Jonathan Cohn points out, it gets worse:

Keep in mind that [these figures] significantly understate the impact of removing the tax credits, because of a secondary effect that would take place. If large numbers of people drop coverage, insurers would have a much harder time keeping a stable balance of healthy and sick people. That would force them to raise underlying premiums, scaring off yet more people. A version of the infamous actuarial “death spiral” would follow: Lower enrollment would lead to yet higher premiums—which, in turn, would lead to even lower enrollment.

Why Obamacare supporters should NOT panic

Over at The New Republic, Brian Beutler lays out eight reasons why Obamacare supporters shouldn’t freak out about the Supreme Court’s decision to take on King. We definitely recommend reading the whole thing, but it’s worth highlighting a couple of them.

First, the court didn’t torpedo Obamacare in 2012 when it had the chance– it makes even less sense now that (1) the legal justification is even weaker in this case; and (2) millions of Americans are now getting coverage under the law.

Also, under Chief Justice John Roberts, the Supreme Court has been extremely pro-business, and as Beutler writes, “An adverse ruling would cause immense harm to powerful corporate interests like private insurance companies, hospitals, and other stakeholders, all of whom oppose the challenge.” The justices may be willing to screw over individuals, but it’s hard to picture them doing something so damaging to these big business.

That said, the Supreme Court can be unpredictable, and no one can say for certain how it will rule. So it’s worth at least considering what states and healthcare advocates can do if five justices do come down against the subsidies. We’ll take a look at that in our next post.

Next post: Here’s what an Obamacare architect actually meant when he said the law wasn’t transparent

Previous post: The 2014 election was bad for Democrats, but there was *some* good news for healthcare