Warning: Use of undefined constant wp_cumulus_widget - assumed 'wp_cumulus_widget' (this will throw an Error in a future version of PHP) in /home/customer/www/whatifpost.com/public_html/wp-content/plugins/wp-cumulus/wp-cumulus.php on line 375
 The Real National Debt Problem
≡ Menu 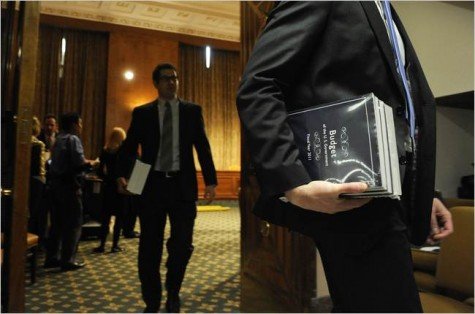 The debate over what to do about the economy tends to get dumbed down into two positions:

Stimulus Spending vs. Reducing the Deficit.

In this simplified version, the Democrats want to spend money like crazy to get the economy going, but aren’t concerned about adding to the national debt.  The Republicans, meanwhile, say they want to something about unemployment, but in the name of “fiscal responsibility” aren’t willing to borrow money to do it.

It’s a tidy explanation, but wrong.  Stimulus spending isn’t a major source of our debt problem- but the massive growth in health care costs over the past decade is.

Short term vs. Long Term Deficits
The bill extending unemployment benefits would add $22 billion to the national debt.  It might sound like a lot of money, but you have to keep in mind that the U.S. has a huge economy.

The figure that most economists use to measure the seriousness of a country’s debt is debt-to-GDP ratio.  That $22 billion would increase our debt-to-GDP ratio a tenth of a percent from 63.4% to 63.5%.  The total increase in our national debt would be about two tenths of a percentage point: $9,807,000,000,000 instead of a mere $9,785,000,000,000.   Meanwhile if all this stimulus spending works, the economy will grow (reducing our debt-to-GDP ratio) and businesses will hire more people (meaning the government can collect more money in taxes, which it can use to pay off some of this debt).

On the other hand, if the government cuts spending now, even more people will lose their jobs, and private industry still isn’t hiring enough to make up the difference.   The one thing the government can do to help is keep money in the economy until businesses start hiring.  When that happens- with the GDP up, and unemployment down- then a responsible  government should start paying off it’s debt.

The problem is that we’re also stuck with a long term, structural deficit.  In other words even when the economy is running just fine, we still have to borrow money to pay for stuff.  It would be like buying an expensive house with mortgage payments that you can’t afford and relying on your credit card to fill the hole.  Eventually it’s gonna catch up with you.

Where did our long-term deficit problem come from? It’s complicated, but there are a couple major causes:

1. Government starting major new programs without figuring out a way to pay for them. In recent years the biggest offenders have been:

None of these were paid for, and they added $2 trillion to the national debt.  Also, all of these policies were supported by Republicans (many of whom are now citing the deficit as a reason not to help unemployed workers).  Meanwhile, at the end of the Clinton administration, there was a budget surplus.
Let’s do the math:

During the final years of the Clinton administration there was a budget surplus.

During the final years of the Bush administration a $2 trillion deficit was created.

I think that we have forgotten how to do basic math.

2. The massive rise in health care costs.
Even without those unfunded government programs, we’d still have a deficit problem.  One of the federal government’s biggest expenditures every year is Medicare, and health care costs have skyrocketed– growing at over twice the rate of inflation.  Which is why, according to the Economist:

“The mark of someone serious about debt issues is an obsession with health cost control.  Pundits fretting about the debt impact of stimulus are poseurs.”

Health Care Costs (the Elephant in the Room) and the Deficit
Peter Orszag, President Obama’s budget director, has argued that health care reform in America is fiscal reform… and he’s right.  Yes, health care reform included a lot of new government spending to help provide insurance for over 30 million people who don’t have it now.  But unlike, say, Medicare Part D which the Republicans supported, this new spending is paid for.

Meanwhile, there are a number of provisions in the bill that should drive down health care costs (and thus the deficit).  Newsweek pointed out some of them in an article titled, How Health Care Reform Reduces the Deficit in 5 Not-So-Easy Steps.  It’s worth reading the entire article, but here they are in a nutshell:

Medicare’s cost problem is, in many ways, a political problem:  Saving money means cutting someone’s profits or someone’s benefits, and politicians are afraid to do either.

Enter the Independent Medicare Advisory Board. Modeled off of the highly-respected  (but totally toothless) Medicare Payment and Advisory Commission, IMAC is a 15-person board of independent experts chosen by the president, confirmed by the Senate, and empowered to  cut through congressional gridlock. IMAC will write reforms that bring Medicare in line with certain spending targets. Congress can’t modify these proposals, it can’t filibuster these proposals, and if it wants to reject them, it needs to find another way to save the same amount of money. Making the process of passing tough reforms easier is the single most important thing you can do to make sure tough reforms actually happen.

Republicans and Democrats both agree that we need more cost control in the health-care system. But politicians don’t like to actually cut costs, because those votes reduce benefits and make people angry. So we’ve played a game in the past: We passively control costs by letting people become and stay uninsured, or by letting their insurance deteriorate and cover less, because those things don’t require a vote in Congress.  But because the individual mandate in the bill brings everyone into the insurance market and the subsidies for those who can’t afford insurance on their own put Washington on the hook for costs, Congress will have to get serious about holding costs down in the system.

All of this is something to think about when the same people who opposed health care reform are now opposing unemployment benefits.