Warning: Use of undefined constant wp_cumulus_widget - assumed 'wp_cumulus_widget' (this will throw an Error in a future version of PHP) in /home/customer/www/whatifpost.com/public_html/wp-content/plugins/wp-cumulus/wp-cumulus.php on line 375
 The OTHER Obamacare subsidy that hardly anyone knows about
≡ Menu

The OTHER Obamacare subsidy that hardly anyone knows about 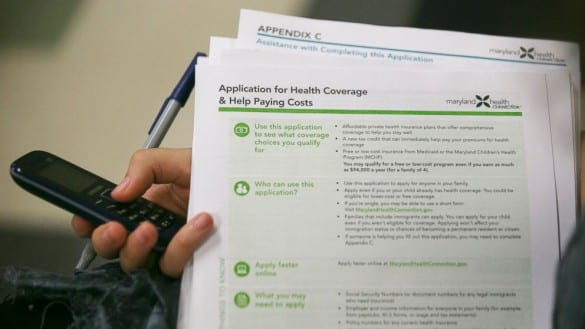 Now that the Obamacare website is mostly working, we’ve been interviewing people around the country to see whether the coverage they’re finding on the new marketplace is actually affordable. For the most part, the answer has been yes– at least for the premiums once the subsidies are factored in. A big concern though, particularly among those at the lower end of the income scale, are the high deductibles and out-of-pocket costs that come with the cheaper plans. And while the new law limits an individual’s annual out-of-pocket costs to $6,350, for someone making less than $20,000 a year, that’s pretty steep.

What most of the people we talked to didn’t know is that in addition to the subsidy to help pay their premiums there’s another subsidy, also income based, that reduces out-of-pocket costs, but– and this is important– only if you buy a silver plan.

If you make less than 250% of the federal poverty line (FPL)– that’s $28,725 for a single person– there are two ways that Obamacare can help you with out-of-pocket costs if you purchase a silver level plan.

Unfortunately these new limits might still be sort of high for some people. Originally Obamacare lowered out-of-pocket limits for anyone making up to 400% of FPL and there were bigger reductions for those making less money, but the Department of Health and Human Services said it was impossible to discount out-of-pocket costs that much without violating other parts of the law.) But there is another way the law reduces out-of-pocket costs.

2. A higher actuarial value. The “actuarial value” of an insurance plan is the percentage of medical costs that the plan will cover for the average enrollee. Silver level plans have an actuarial value of 70%, meaning that on average the insurance company will pay 70% of medical bills, and enrollees will cover 30% out of pocket. (Note: this doesn’t mean that if you come down with a major illness you’re on the hook for 30% of a hugely expensive bill– that 70% is an average spread out among everyone the plan covers. For a more detailed explanation, check out our earlier post on actuarial value here.)

Really all you have to know about actuarial value is that the higher the percentage, the lower your out-of-pocket costs. What Obamacare does for those making less than 250% of the FPL is bump up the actuarial value of silver plans (and only silver plans):

Those higher actuarial values mean lower out-of-pocket costs, but it’s up to the insurance companies to figure out the details. According to a brief from the Kaiser Family Foundation:

[The ACA] does not specify the combination of deductibles, copayments, and coinsurance that plans must use to meet the actuarial value requirements. So, for example, one plan may choose to have relatively higher deductibles but relatively low copayments for office visits and other services, while another plan may choose a lower deductible but higher copayments or coinsurance for each service. [Although in some states, like California, out-of-pocket costs are standardized, meaning all silver level plans at a given income level will have the same deductibles and copays.]

For some reason when you shop for coverage on healthcare.gov, it doesn’t specifically tell you that there’s this extra subsidy for silver plans to help cover out-of-pocket costs. However, if you qualify for it, you can sort of see it in your summary of insurance options… if you know to look for it. Here’s the summary for someone in their 30’s making about $20,000 per year: 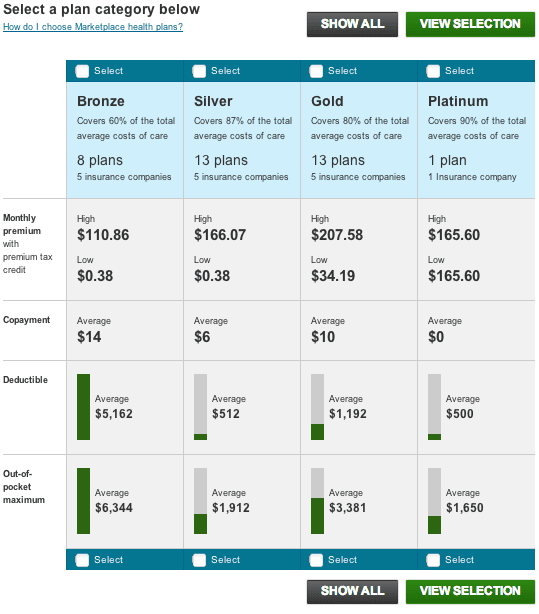 Under “Silver” it says the plans cover 87% of the total average cost of care, instead of the 70% it would cover without the subsidy. Also, notice that the average silver plan deductible and out-of-pocket maximum is much lower than even the gold plans.

If you don’t make much money, the temptation is to pick the cheapest bronze plan. But many of these plans are just a small step above catastrophic coverage– if you’re young and healthy that might be fine, but if you have to go to the doctor or hospital for anything other than preventive care (which is free under the new law), it can end up being pricey. For those who are worried about the cost when they do need medical care, the silver level plan could be a much better deal.

Next post: An Obamacare guide for freelancers and the self-employed

Previous post: How your Obamacare insurance subsidy is calculated (an advanced lesson)