Warning: Use of undefined constant wp_cumulus_widget - assumed 'wp_cumulus_widget' (this will throw an Error in a future version of PHP) in /home/customer/www/whatifpost.com/public_html/wp-content/plugins/wp-cumulus/wp-cumulus.php on line 375
 The Obamacare websites: what went wrong?
≡ Menu

The Obamacare websites: what went wrong? 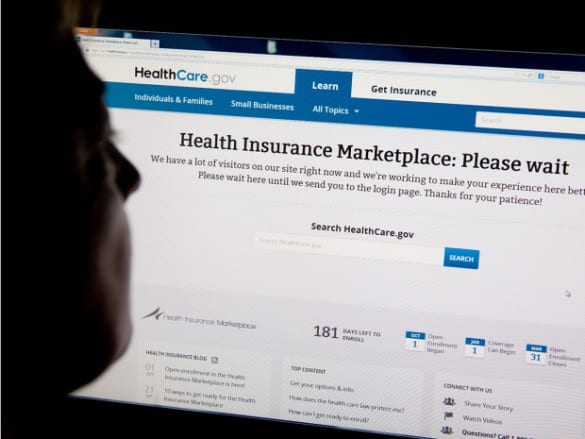 When Obamacare’s online marketplaces launched earlier this month, everyone expected some glitches, and indeed, almost as soon as the sites went live, reports of problems started rolling in. At first, it seemed like the big problem was the overwhelming response, but it’s now over two weeks later, traffic has dropped 88%, and the site is still a mess: few people using the federal marketplaces have managed to complete applications, and even fewer have managed to enroll in coverage.

Of course, now the big questions are what went wrong and when will it be fixed? It’s hard to find answers- the Centers for Medicare and Medicaid Services (CMS), the agency overseeing the federal exchange, has been pretty quiet about what’s going on with the marketplaces, and won’t release enrollment information until next month. Here’s what we do know.

Originally we were going to do an explainer on the exchanges: what they are, who’s running them, who built them, etc. Turns out The Washington Post beat us to it, with this excellent primer: Everything you need to know about Obamacare’s error-plagued websites.

Also, keep in mind that in this post we’re talking about federally-run exchanges– the state run exchanges, while still somewhat glitchy, are faring much better. (And if you’re hazy on the difference between the two types of exchanges, definitely check out that primer.)

To get insurance through the online marketplace, there are basically four steps:

Since the launch of the exchanges on October 1, every step in this process has been broken at some point.

Creating an account doesn’t require much information: you just have to tell the site what state you live in, enter your email address, and pick a user name and password. However, during the first few days after the launch, getting to where you enter this information often meant waiting quite a while. There was also a glitch involving the security questions the site asks you to pick (in case you forgot your user name or password) that prevented most users from completing accounts.

Both problems seemed to be the result of the massive amount of traffic to the site combined with site design/coding problems. The site had 9.4 million unique visitors in the first week– in the first 36 hours it got more visitors than Southwest Airlines or Citibank get in a month. Eric Gunderson, president of Development Seed, the relatively small company that built the “front end” homepage (the one part of the site that hasn’t been broken), says:

“They got, in 24 hours, more people trying to register than Twitter got users in 24 months. Let’s not all hate on the government here.”

We haven’t heard anything lately about account creation problems, so apparently developers fixed the problem (or it fixed itself as fewer people visit the site). Other parts of the process are another story though.

After you complete an account, but before you can shop for coverage, you have to verify your identity and complete a lengthy application to see (1) what level of subsidy, if any, you’re eligible for; and (2) make sure that you’re not eligible for other government health programs like Medicaid or Medicare.

Most people don’t understand just how complicated this is. To verify your identity and check what subsidies you qualify for, the system has to get data from the Social Security Administration and the Department of Homeland Security. Making sure you’re not eligible for other government health coverage means retrieving data from the Veterans Health Administration, the Department of Defense, the Office of Personnel Management, and the Peace Corps, as well as your state’s Medicaid and Children’s Health Insurance Program agencies.

Getting the exchanges to work with all these different systems is incredibly difficult… it also means there are plenty of places where things can go wrong. Most users who have tried completing applications have seen error messages like this one (which we’ve gotten to know very well recently): 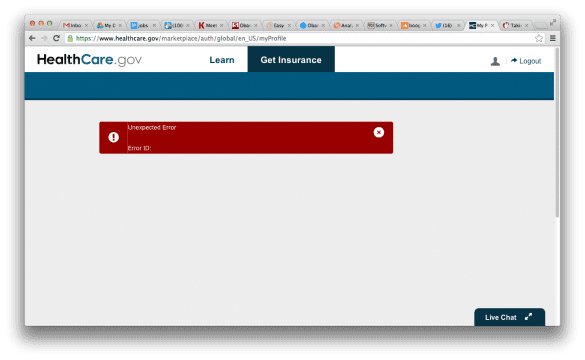 3. Shopping for coverage is broken

It took over a week, but I finally managed to complete an application and get to the next step: shopping for a plan. Almost immediately I noticed a problem– the site said the monthly premiums included my subsidy, but it was actually showing the unsubsidized rates. Based on the age and income level I entered, the prices should have been much lower: 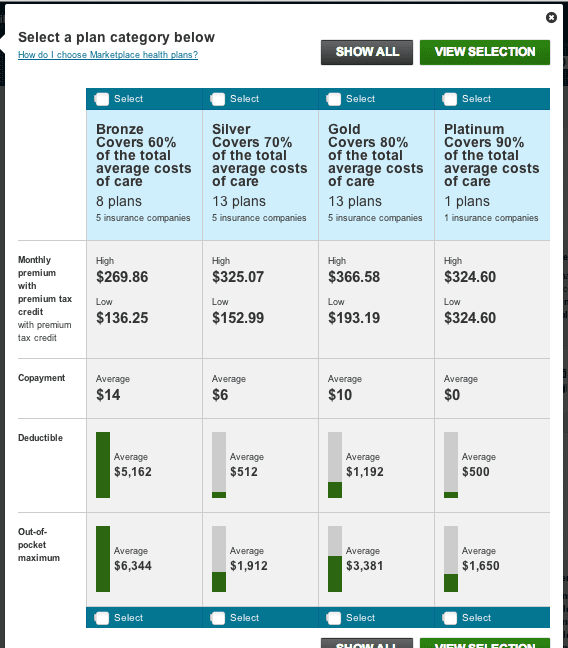 Also, I logged out of the site while double-checking insurance rates in my area. The next day when i tried to log back in, it took me to a blank screen: 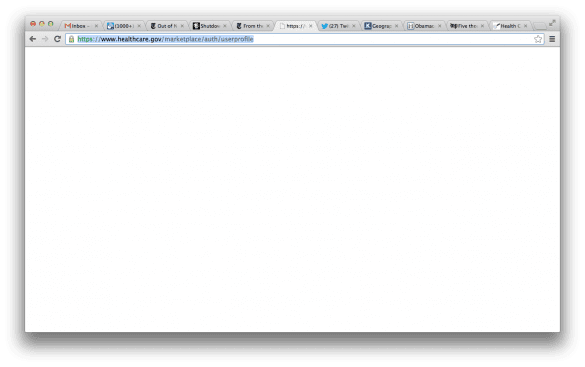 A week later (and after clearing the cache and cookies on my browser, which many users might not think to do), I can finally access my application… although it’s apparently lost all the info I entered before.

4. Misreporting enrollment data to insurance companies
The system is supposed to send each insurer a daily report listing people who have just enrolled in their plans, but insurers say the information they’re getting is confusing and duplicative. From a front-page story in The Wall Street Journal:

Emerging errors include duplicate enrollments, spouses reported as children, missing data fields and suspect eligibility determinations, say executives at more than a dozen health plans. Blue Cross & Blue Shield of Nebraska said it had to hire temporary workers to contact new customers directly to resolve inaccuracies in submissions. Medical Mutual of Ohio said one customer had successfully signed up for three of its plans.

According to Robert Laszewski, president of the consulting firm Health Policy and Strategy Associates, it actually might be a good thing that the application process isn’t working, at least for now:

When will the marketplace be fixed?

Right now, nobody knows– not even CMS– although the tech people are reportedly working round-the-clock to fix it. Yuval Levin, writing for the ultraconservative National Review of all places, actually did some pretty great reporting, talking to a number of insurance executives and CMS officials about the state of the federal marketplaces. Here’s what they told him:

[Insurers] believe, as the CMS officials I spoke with do, that all of these problems will not be addressed immediately. No one wants to say how long it might take, and no one would share with me what estimates they might be getting from their contractors (whom they no longer trust anyway), but there has so far been relatively little progress and it seems like everyone involved is preparing for a process that will take months, not weeks.

Others are more optimistic. One insurer told The Washington Post’s Ezra Klein that “the quality of data coming from the exchanges is getting better.” The problems aren’t solved, but they’ve definitely seen an improvement over the past few days. Still, as Klein points out, “If you talk to one insurer you’ve talked to one insurer,” and others are reporting no change.

So yeah, it’s a mess. Luckily it’s still early in the process, and if it takes a really long time to fix, the Obama administration can delay the individual mandate. More on that, along with looks at why the launch failed so badly and what went right with the marketplace launch next week.

UPDATE: The Washington Post points out two other features that aren’t working: (1) Medicaid enrollment directly through the site (if users qualify for Medicaid they’re advised to contact their state Medicaid agencies, where they have to start new applications from scratch); and (2) the entire Spanish language version of the site. No word on when either of those issues will be fixed.

Next post: Who broke the Obamacare marketplaces? Part 1: The Republican opposition

Previous post: How Kathleen Sebelius should have answered Jon Stewart’s question about mandates