The Obamacare deadline is Monday. Here’s a last-minute guide to buying coverage. 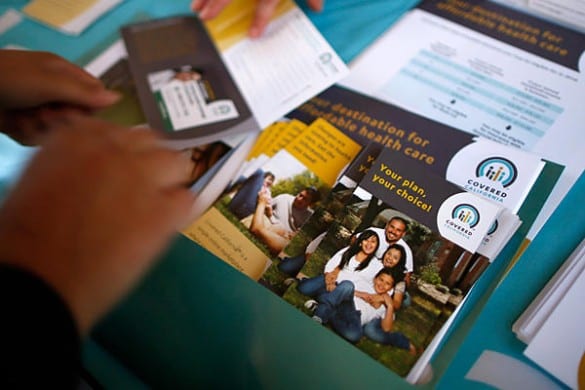 By now hopefully you’ve heard that Monday, March 31 is the deadline to buy Obamacare coverage for 2014 (with a little flexibility– if you start before the deadline and get stuck, you can finish after March 31. More info on that below). If you’re uninsured and waiting until the very last minute, here’s everything we’ve written about how to get Obamacare coverage all in one place.

Explainer: How you’ll get coverage under Obamacare: If you’re totally new to all this Obamacare stuff, this is the place to start. We explain:

Five terms you need to know before you buy Obamacare coverage: Buying insurance can be ridiculously complicated, especially if you’ve never done it before. Here we explain the terms you need to know to understand the coverage you’re choosing– premiums, deductible, co-pay, coinsurance, and out-of-pocket maximum– and how they work together. (Even if you think you know these concepts, you might want to brush up. One recent study from a healthcare economist at Carnegie Mellon University found that just 14% of respondents with insurance could correctly identify all of those terms.)

What the “actuarial value” of a plan is (and why you should ignore it): Some people see a 60% actuarial value, and think that means the plan will only cover 60% of serious medical expenses, leaving them on the hook for 40% of a potentially huge bill. Fortunately that’s not how actuarial value works– it’s simply an average across the entire population covered by the plan. Only insurance company actuaries need to worry about the specific percentage. For everyone else, you should be looking at the deductible, copays, and coinsurance, and just know that in general a higher actuarial value will mean lower out-of-pocket costs.

How your Obamacare subsidy is calculated: an advanced lesson: When you apply through the online marketplace it automatically calculates the subsidy you qualify for based on your income. For most people that’s fine, but if you have more complicated questions about why your subsidy is what it is (for example, if you’re a young person wondering why you don’t qualify for a subsidy even though your income is below 400% of the poverty line) and don’t mind a little math, this post will explain.

The OTHER Obamacare subsidy hardly anyone knows about: Most people have probably heard that there are subsidies to help pay for premiums based on income. What you might not know is that for those making less than 250% of the federal poverty line ($28,725 for a single individual) you also qualify for reduced out-of-pocket costs, but only if you buy a silver level plan.

Wondering if your income is above or below Obamacare’s income cutoff? Read this: If you live in a state that didn’t expand Medicaid, the cutoff to qualify for subsidies is extremely important–  it will likely mean the difference between getting affordable coverage or remaining uninsured. There have been a few numbers floating around about where that line is exactly– in this post we clear it up.

Five things non-citizens need to know about Obamacare: This is the group that will have the hardest time applying for Obamacare. Not only does their eligibility for subsidies or Medicaid depend on income, on top of that immigration status, how long you’ve lived in the country, and in some cases country of origin will all play a role. Here are the most important things you need to know to get covered.

The deadline to apply for coverage is this Monday, but there is a little wiggle room. If you’ve started the application before the deadline, but haven’t finished because you got stuck on one of the steps or if something else went wrong, you can apply for a limited time after March 31. The Centers for Medicare and Medicaid (which is running the federal exchange) hasn’t said how much extra time you’ll get though. A spokesperson said it depends on the backlog, telling reporters, “It could take a few days, it could take a week or so.” Also– and this is important– you don’t have to prove that you got stuck– instead the government is relying on the honor system.

Keep in mind that this is just for online applications on the federal marketplace. If you’re planning to send in a paper application, CMS has to get it by April 7 for coverage starting May 1, and you have until April 30 to pick a plan. If you live in a place where the state is running the online marketplace, there will be different rules for how or if the deadline is being extended– go to the state’s marketplace site to find out.

Three reasons to fill out the application even if you’re not planning to purchase coverage: If you’re thinking about going without insurance and just paying the penalty, or you live in a state that didn’t expand Medicaid and think your income is too low, this post covers the reasons why you should consider applying anyways:

Can you switch Obamacare plans after you’ve already enrolled?: The short answer is “it depends.” The long answer is here.

Kaiser Family Foundation has a pretty great FAQ page if you have any questions that aren’t answered in the posts above. Also, now through the deadline we’re answering your Obamacare questions on our Facebook page— leave your questions there or in the comments below and we’ll do our best to answer!

Next post: How to get covered now that the Obamacare deadline has passed