Warning: Use of undefined constant wp_cumulus_widget - assumed 'wp_cumulus_widget' (this will throw an Error in a future version of PHP) in /home/customer/www/whatifpost.com/public_html/wp-content/plugins/wp-cumulus/wp-cumulus.php on line 375
 The kids are alright: 5 reasons Obamacare is a good deal for young people
≡ Menu

The kids are alright: 5 reasons Obamacare is a good deal for young people 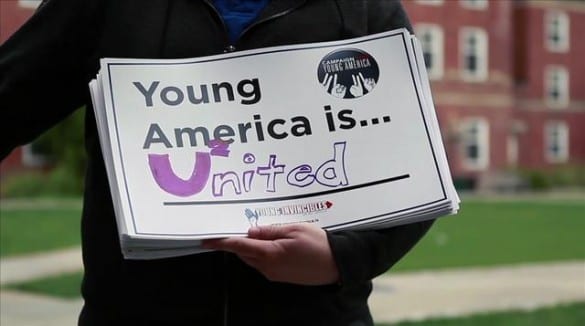 Last week, Buzzfeed’s Ben Smith generated a lot of, well… buzz, with an article titled “Obama Prepares to Screw his Base.” The premise of the piece is that young people, who were key to President Obama’s reelection, will have to pay disproportionately for Obamacare. Smith writes:

The provisions required to make any kind of health insurance plan work — not just ObamaCare, but really any plan of its sort — require healthy young people to pay more in health insurance than they consume in services, while the elderly […] consume far more than they pay in.

He’s right that in the exchanges most young, healthy Americans will pay more in premiums than they’ll consume in services, because the law’s “community rating” provision says insurers can only charge older people three times as much as younger enrollees.  Community rating is just one part of Obamacare though– other provisions in the new law disproportionately benefit young people.

And so, inspired by Buzzfeed’s link-baiting headline, here are Five Reasons Obama is Good for Young People.

1. Young adults can stay on their parent’s insurance until they turn 27

Really any discussion of how the law will affect young adults, should start with the fact that 3.1 million Americans age 19-25 have gained coverage as a result of this provision. That’s a 10% increase in the number of young adults with coverage, since the law took effect. What’s particularly impressive about these numbers is that private health coverage has declined for every other age group over the same period (thanks to the economic crisis we’re still climbing out of).

The Washington Post’s Ezra Klein, as usual, puts it well:

Being “young” is an unusual demographic category in that it’s temporary. At the moment, I’m white, and barring some truly unforeseen circumstances, I’m going to remain white for some time. Conversely, while I’m young at the moment, I fully expect to get older. A policy that’s a bad deal for me now might be a good deal for me soon. Smith waves this away by saying he’s talking about “the current young,” but that’s an odd category, to say the least. By his logic, young workers should be out in the streets protesting 401(k)s.

Young people may be paying more into Obamacare now, but eventually they too will benefit from limits on how much insurers can charge based on age.

3. Young people are much more likely to qualify for subsidies

The law provides subsidies to help pay for coverage for anyone making less than 400% of the federal poverty line (currently $44,680 for individuals), and Medicaid for anyone making less than 138% of the FPL (about $15,000 for individuals). And guess what? Young people, who are still in school or just starting their careers, tend to make less money than older people– most young people will qualify for help paying for coverage: 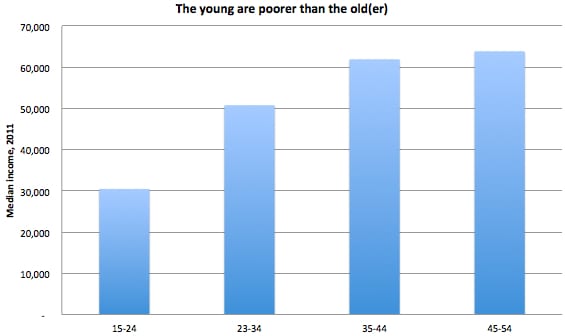 4. Young people are less likely to work for employers who offer health coverage

While young people are less likely to use medical services, now they’ll be able to get decent health insurance “just in case,” without worrying about getting dropped if they do get sick. That is a major benefit to a group that often doesn’t have access to coverage through their employers. Ezra Klein writes:

You don’t buy health insurance because you’re hoping to get out more than you paid in. That would mean, in essence, hoping to get terribly sick so you could get the satisfaction of running up high medical bills. You buy it because, if something awful happens, it protects you.

5. People under thirty can get cheaper “young invincible” policies

Some young adults do make enough money that they won’t qualify for help paying for coverage. If they don’t get coverage through their job, this group could see unexpectedly high premiums when they try to purchase coverage on the exchange. But the new law provides another option for this group: people under 30 years old will be allowed to buy cheaper catastrophic coverage, a barebones plan for people who aren’t likely to have a ton of medical expenses.

The Washington Post’s Sarah Kliff reports that Young Invincibles, a group founded by Georgetown law students to advocate for young adults in the healthcare debate, is happy with the new law’s options:

The combination of subsidies for most – and lower cost health plans for all – explains why Young Invincibles was pretty sanguine about the age rating regulations in comments they submitted in December.

“The change in age rating may increase premiums for young people in the individual market, however, the reality is more nuanced,” the group wrote. “Most young people will also receive protection from those increases through subsidies and access to reduced-cost coverage such as dependent coverage and catastrophic plans.”

Next post: The best points from Time’s cover story on medical costs