Warning: Use of undefined constant wp_cumulus_widget - assumed 'wp_cumulus_widget' (this will throw an Error in a future version of PHP) in /home/customer/www/whatifpost.com/public_html/wp-content/plugins/wp-cumulus/wp-cumulus.php on line 375
 The Kathleen Sebelius (non)scandal
≡ Menu 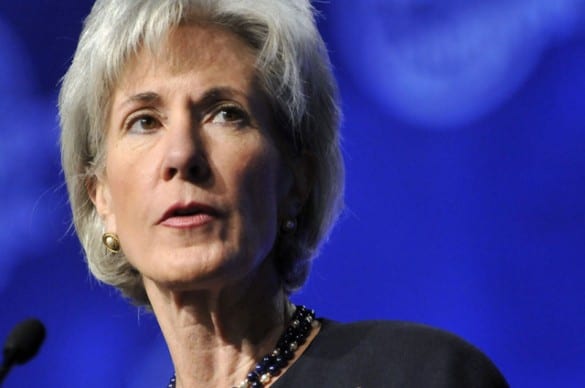 Since everyone else in the media has apparently decided that this is scandal week, we figured we’d look into a supposed mini-scandal involving Secretary of Health and Human Services Kathleen Sebelius. Republicans have accused Sebelius of shaking down healthcare executives to help pay for the implementation of Obamacare, which if true would be improper and possibly illegal. However, like the Benghazi, IRS, and Justice Department controversies, after a closer look at the facts this “scandal” falls apart.

First, some background. The Affordable Care Act included only $1 billion to be used for implementing the new law– not nearly enough according to estimates from the Congressional Budget Office, and that was back when it thought almost every state would run its own exchange. HHS asked Congress for an additional $1 billion last year, but was turned down. They asked for $1.5 billion in this year’s budget, but that’s been stalled in Congress. Meanwhile the health care exchanges are supposed to start enrolling people in October.

And so, stuck with the responsibility of implementing Obamacare, but without the money to do it effectively, Sebelius has turned to outside groups for help. According to the Washington Post:

Over the past three months, Sebelius has made multiple phone calls to health industry executives, community organizations and church groups and asked that they contribute whatever they can to nonprofit groups that are working to enroll uninsured Americans and increase awareness of the law, according to an HHS official and an industry person familiar with the secretary’s activities.

There really shouldn’t be anything scandalous here. Federal regulations say that Sebelius is allowed to solicit donations, just not from members of industries she regulates. HSS confirms that she has asked churches, advocacy groups, and “companies not regulated by HHS” to contribute to Enroll America, a nonprofit foundation set up to educate Americans about the new law. As for the more serious charge that Sebelius is also shaking down health care execs for donations (which in the Washington Post article comes from (1) an unnamed source who (2) did not participate in the calls, and (3) says only that there was an “insinuation” that insurers should give to nonprofits like Enroll America):

[Jason] Young, the HHS spokesman, still disputes the central premise of the Washington Post story and all the criticism it has sparked. “The secretary has made no fundraising request to entities regulated by HHS,” he says. “We’ve worked with a wide range of stakeholders. But when it comes to fundraising, we ask only non-regulated entities”—that is, no one from the health-care industry.

Republicans, like Tennessee Senator Lamar Alexander, know that so far there’s no evidence that Sebelius was raising money from people she regulates. Instead Alexander says, “I’m more concerned about her using private funding and private organizations to do what Congress has refused to do,” and compares it to the Iran-Contra scandal.

Ignoring that it’s maybe a tad extreme to compare asking for help implementing a domestic policy passed by Congress to the secret funding of Nicaraguan death squads– there’s also nothing unusual about what Sebelius is doing. As Young told Bloomberg news, health secretaries under the Bush and Clinton administrations did the same thing to help implement Medicare Part D and the Children’s Health Insurance Program.

If anything, the real scandal is in Congress. House Republicans know they can’t repeal Obamacare, but they can try to keep implementation from going smoothly. Their hope is that a chaotic roll-out of the new law will embarrass President Obama and the Democrats, and apparently it makes no difference that millions of Americans are caught in the crossfire.

UPDATE: The New York Times reports on another effect of Republican efforts to turn Sebelius’ fundraising efforts into another scandal:

A federal health official said potential donors had become “gun-shy” because of the onslaught of Republican criticism of the administration’s fund-raising practices. A person involved in raising money for Enroll America said that many corporations and philanthropies “are risk-averse and do not want to be involved in anything controversial.”