Warning: Use of undefined constant wp_cumulus_widget - assumed 'wp_cumulus_widget' (this will throw an Error in a future version of PHP) in /home/customer/www/whatifpost.com/public_html/wp-content/plugins/wp-cumulus/wp-cumulus.php on line 375
 The interesting stuff in the latest CBO report
≡ Menu

The interesting stuff in the latest CBO report 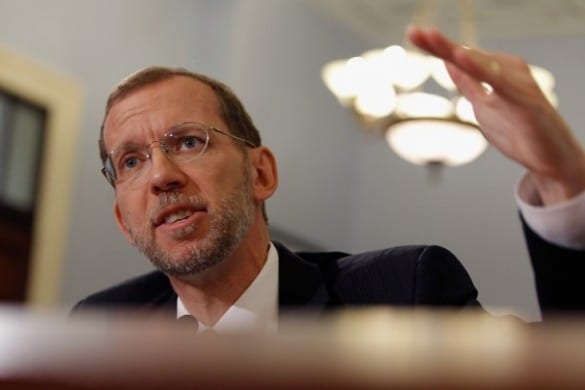 While most coverage of the recent Congressional Budget Office report has focused on Obamacare’s effect on jobs, it’s not the most interesting thing in there. As we pointed out yesterday, all the report really says is that some people will choose to work fewer hours, mostly because (1) now they don’t have to stay in full-time jobs just to get health coverage, and (2) since your subsidy for coverage decreases as your income increases, extra hours of work are worth a little less.

By the way, this isn’t the first time the CBO said that people would choose to work fewer hours under Obamacare. Heck, it isn’t even the first time these figures have been misinterpreted. Back in early 2011, Republicans claimed that an earlier CBO report (which said that Obamacare would reduce hours worked by 0.5%– they upped that figure to about 1.5% in the latest version) said Obamacare would “kill” 650,000 jobs. In our coverage at the time, we cited an Associated Press fact check, which found:

What the CBO actually said is that the impact of the health care law on supply and demand for labor would be small. Most of it would come from people who no longer have to work, or can downshift to less demanding employment, because insurance will be available outside the job. […]

The law “reduces the amount of labor supplied, but it’s not reducing the ability of people to find jobs, which is what the job-killing slogan is intended to convey,” said economist Paul Van de Water of the Center on Budget and Policy Priorities.

Two things in this latest report are noteworthy though. For starters, we finally have the CBO’s estimate of how the technical issues that plagued the launch of healthcare.gov will affect enrollment. And second, the report further demolishes the Republicans’ argument that Obamacare’s risk corridor provision is a “bailout” of insurance companies.

The nonpartisan office is now projecting that 2 million fewer people will gain coverage in 2014 than it had previously expected. “Those changes primarily reflect the significant technical problems that have been encountered in the initial phases of implementing the ACA,” the Congressional Budget Office writes.

Half of the reduction comes from private insurance sign-ups, where the 2014 projection is reduced from 7 million to 6 million. The other half comes from Medicaid, where the Congressional Budget Office cut its projection of 9 million sign-ups in 2014 down to 8 million.”

A couple things to keep in mind about this reduction:

1.) Even though 2 million fewer people will get coverage through Obamacare this year, the CBO estimates only 1 million fewer will be uninsured. They say this is largely because back in November the White House gave states the option of letting insurers renew plans that didn’t meet certain Obamacare requirements for another year. The CBO estimates that 1.5 million people– most of whom would have bought coverage on the Obamacare exchanges– will instead keep their old coverage in 2014 because of that rule change.

2.) According to the CBO, the technical issues from the first few months will have no effect on how many people Obamacare will cover in the long term. Kliff puts it this way: “It essentially expects, over the next decade, that the people who didn’t get signed up in 2014 will work their way into coverage.”

Recently Republicans have been claiming that an obscure provision known as “risk corridors” is actually an insurance company bailout. We explain risk corridors more in depth here, but the short version goes like this: Insurers don’t have much experience setting premiums under a system like Obamacare, so to keep them from being overly cautious during the first few years, the federal government will share in the potential losses and gains from plans sold on the exchanges. If a plan makes more money than a certain target, it pays some of those profits to the federal government; if a plan loses money, the federal government pays the insurer to cover some of those losses. 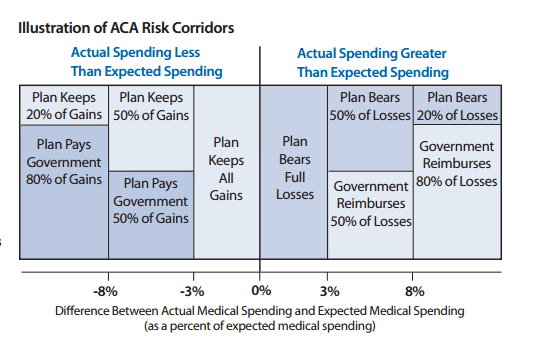 The claim that risk corridors are a bailout assumes that not enough healthy people will sign up for Obamacare plans, causing most plans to lose a bunch of money, and leaving the federal government on the hook for these huge losses.

The CBO basically says there’s no evidence that this is happening. In fact, according to their estimates, the federal government will actually save money off the risk corridors. They expect the government will bring in $16 billion from plans that make money on the marketplaces, while paying only $8 billion to plans that lose money, for $8 billion in net savings.

This news comes at an interesting time– the national debt ceiling needs to be raised by the end of February in order to prevent default, and Republicans have been saying they might refuse to do so unless Democrats agree to repeal the risk corridors. House Republicans had even scheduled a hearing entitled, “Obamacare: Why the Need for an Insurance Company Bailout?”

Apparently Republicans have now realized that threatening to destroy the U.S. economy in order to repeal something that saves taxpayers $8 billion was going to look reeeeally bad, and have dropped plans to tie the debt ceiling increase to risk corridor repeal. So, thank you CBO report!

There are other interesting things in the report– for example, it says this year’s deficit will be smaller than previously expected. We wish the media would focus more on those parts, instead of rehashing old debates about whether Obamacare kills jobs– a claim that was debunked three years ago.

Previous post: No, the CBO didn’t just say that Obamacare is a job killer