Warning: Use of undefined constant wp_cumulus_widget - assumed 'wp_cumulus_widget' (this will throw an Error in a future version of PHP) in /home/customer/www/whatifpost.com/public_html/wp-content/plugins/wp-cumulus/wp-cumulus.php on line 375
 The health of poor neighborhoods in cities like Baltimore
≡ Menu

Fox News has yet to report on what Rose calls the “real story,” but the riots did inspire the rest of the national media to finally take a closer look at life in poor, predominantly black West Baltimore neighborhoods. What they’ve found is a health crisis. As the pastor at one Baltimore church put it to The New York Times: “If the statistics that are present in these communities were present in any white community in Baltimore, it would be declared a state of emergency.”

In Upton-Druid Heights in West Baltimore — one of the city’s poorest neighborhoods and, in recent days, the scene of some of its most vocal protests — the cost of long-term poverty is counted in lives. Its residents die from nearly every major disease at substantially higher rates than the city as a whole — nearly double the rate from heart disease, more than double the rate from prostate cancer, and triple the rate from AIDS. Life expectancy here is just 68 years, one notch above Pakistan.

The fact that 94 percent of its population is black is lost on no one.

“In 2 Baltimore neighborhoods, infant mortality is higher than in the West Bank.” (Vox):

Nationally, the United States does quite poorly. For every 1,000 babies born, 6.1 babies will die before their first birthday — the highest rate among wealthy countries. But that average hides shocking disparities between states, cities, and even towns. The infant mortality rate in richer Baltimore neighborhoods like Canton is barely distinguishable from, say, the infant mortality rate in Finland. But according to 2013 data collected by Baltimore Neighborhood Indicators Alliance, in Baltimore’s Little Italy neighborhood, about two out of every 100 children die before their first birthday — which puts infant mortality in Little Italy roughly on par with Nicaragua and Uzbekistan. 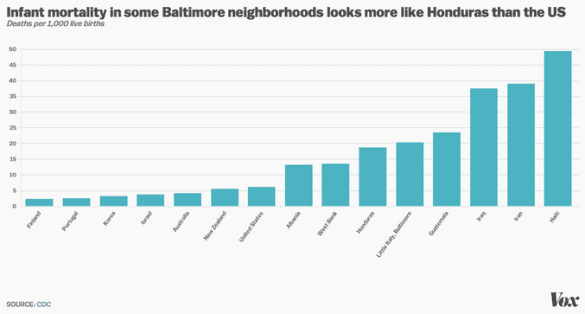 The article also looks at some of the reasons why there’s such a large gap in infant mortality between low and high-income babies:

“You might think that lower-income babies have access to worse neonatal care, but we find that the place where there is higher mortality is actually the later part of infancy,” says [Emily Oster, an economist at the University of Rhode Island]. “When babies get home — when there are accidents and different sleep environments and those types of things — you see differences show up.”

Oster’s research shows that the most common causes of infant mortality tend to be accidents and sudden infant death syndrome, or SIDS. These are challenges that are difficult to target with specific policy responses — or least those that easily fit within a city budget.

“Freddie Gray’s life a study on the effects of lead paint on poor blacks.” (Washington Post):

Lead exposure is a major health hazard for small children– even at miniscule levels, it’s been linked to lower IQ’s, reading and learning disabilities, ADHD, and destruction of the part of the brain associated with “executive functions” like aggression, emotional regulation, and impulse control. The Centers for Disease Control says that “No safe blood lead level in children has been identified,” and has set 5 micrograms per deciliter as its “level of concern”- i.e., the level at which public health agencies should take action. In 1991, when Freddie Gray was a toddler, his blood carried 37 micrograms of lead.

Before Baltimore and other cities began taking steps to eliminate lead paint exposure, tens of thousands of children like Freddie Gray were poisoned by lead paint, mainly in poor inner-city neighborhoods with older houses. As The Washington Post reports, cities like Baltimore are still struggling with the consequences:

“A child who was poisoned with lead is seven times more likely to drop out of school and six times more likely to end up in the juvenile justice system,” said Ruth Ann Norton, [executive director of the Coalition to End Childhood Lead Poisoning]. She called lead poisoning Baltimore’s “toxic legacy” — a still-unfolding tragedy with which she says the city has yet to come to terms. Those kids who were poisoned decades ago are now adults. And the trauma associated with lead poisoning ­“creates too much of a burden on a community,” she said.

Further Reading: A pair of recent news articles, one from Chicago and the other from New York, show that while cities have made progress removing dangerous lead paint, poor black families are still disproportionately affected in the thousands of homes where it remains.

Also, back in 2013, Mother Jones magazine published an excellent article by Kevin Drum arguing that the rise and fall of leaded gasoline might be at least partly responsible for the rise in crime rates in the 1960’s and 70’s, and their subsequent plunge beginning in the 1990’s. The theory isn’t bulletproof— since even people who had been exposed to lead as children started committing fewer crimes in the 90’s– but on the other hand, Drum is a thorough reporter and points not just to multiple studies, but to multiple types of studies showing a strong correlation between lead and crime rates.

One person Drum interviewed for the story was toxicologist Howard Mielke. Mielke is currently a professor at Tulane University, but in the 1970’s he worked at the University of Maryland-Baltimore County, which is where he first discovered that lead from car exhaust was poisoning the soil, particularly in heavily trafficked inner-city areas. And as he tells Drum in an extended interview, all that lead from car exhaust didn’t just disappear. With the exception of places that have resodded (something Minneapolis, for example, did in the 1980s), that lead is still sitting in the soil, and in the summer, as the weather dries, it gets kicked up as dust:

“Using the standard we have in the US of 400 ppm, you would be poisoning the children very easily. How many minutes does it make for a child to play outside and put his hand in his mouth? We did work on hand licks. When children are outside, just one lick and it exceeds the total tolerable daily intake. Just one lick.”

Arguably even more striking than the arrest numbers is the disparity that the Health Department found between the city’s overall homicide rate and the homicide rate in Gray’s community, with residents of Sandtown-Winchester/Harlem Park more than twice as likely to be killed than residents of Baltimore overall. If you look at nonfatal shootings, you see pretty much the same ratio, with 91.2 people for every 10,000 being shot in Gray’s corner of Baltimore, versus 46.5 citywide.

All that violence, combined with other factors, is reflected in the mortality rate reported by the Health Department, which was 44 percent higher for 25-to-44-year-olds in Sandtown-Winchester/Harlem Park than it was for the same demographic citywide.

Further reading: Over the past couple weeks we’ve seen a lot of reporting on high murder rates in Baltimore, but as the Baltimore Sun reported in December, all that violence takes a mental toll as well, particularly in children:

Even as shootings, stabbings and murder trials grab the spotlight, violence in Baltimore is exacting another insidious, often invisible, toll — warping the health and development of the city’s youngest residents. For every child who is shot, provoking public outrage, there are hundreds of others who hear gunshots or see fights and stabbings in neighborhoods across the city. After the ambulances drive off and the crime scenes are cleared, many of these children are left with deep psychological wounds that can trigger physical ailments.

Studies have piled up showing that in the tangle of tough, intractable issues like poverty and drug addiction, exposure to violence is a major factor damaging children’s health. The stress that fills their little bodies breeds anxiety and depression, making it hard for them to concentrate in school. In fact, research has found that such experiences hurt the development of crucial areas of their brains — those involving attention, memory and behavior control. In the worst cases, children walk around with symptoms of post-traumatic stress disorder no different from those plaguing soldiers who have fought on the front lines.

Pretty much everything else

Thomas LaVeist, director of the Hopkins Center for Health Disparities Solutions has been studying racial disparities for decades, and as the website Vox reports:

He found that even when you control for education and income, black people still fare worse than white people, and he thinks one key cause is everyday racism.

“These little microaggressions include things like going to a reception and sipping a glass of wine, and no one talks to you; trying to go into an elevator and someone doesn’t hold the door for you; or walking into the elevator and someone moves further away as if they’re concerned about you snatching their purse,” he said. “These things are happening at a subconscious level, and they have a physiological and psychological response. That degrades your health, and it has been shown to degrade the strength of the immune system.”

What tends to get overshadowed in all of this is that while the statistics as a snapshot in time are appalling, the trend in recent years has been positive. In Baltimore, far fewer kids are being poisoned with lead, infant mortality has declined even in high-risk neighborhoods thanks to programs like B’More For Healthy Babies (which teach safe sleeping practices, educate fathers, and get mothers pre- and post-natal healthcare), the homicide rate has declined, and over the past decade, the city’s life expectancy has improved at twice the rate of the national average. Other poor urban neighborhoods have seen similar gains.

However, the current statistics in low income, inner-city neighborhoods– the result of decades of segregation and racist housing policies— are, of course, still unacceptable. For the health of these neighborhoods to really improve, we as a country can’t continue to ignore them– and it shouldn’t take a riot to get our attention.

Next post: How a life-long Republican accidentally made the case for mandatory universal health coverage