Warning: Use of undefined constant wp_cumulus_widget - assumed 'wp_cumulus_widget' (this will throw an Error in a future version of PHP) in /home/customer/www/whatifpost.com/public_html/wp-content/plugins/wp-cumulus/wp-cumulus.php on line 375
 The fuzzy math behind Bernie Sanders health plan
≡ Menu 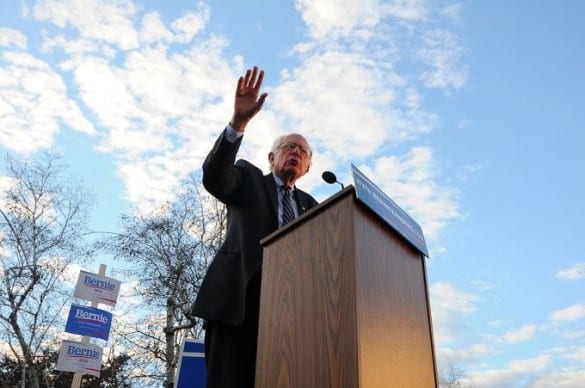 [This is the first post in a series on the health plans of the 2016 presidential candidates.]

Even before they released specific plans, it was obvious that Bernie Sanders and Hillary Clinton had very different philosophies for improving our health system. Clinton promised an incremental approach: new regulations and funding to fix issues that Obamacare missed, but otherwise keeping the current system. Sanders proposed something much more radical: eliminating private insurance entirely, and covering everyone under one single-payer system.

It’s a great idea in theory: everyone gets an insurance card that they can take to any doctor or hospital in the country. No more worrying about whether you have insurance, whether a provider is in-network, or whether your claim will be denied. Single-payer also saves money thanks to lower administrative costs– hospitals don’t have to bill hundreds of different insurance plans, each with their own rules– and by negotiating for better prices from drug companies. Canada and a few other countries have shown that a national single-payer plan can work; they spend much less per person on care than us while covering everyone.

The hard part is figuring out how to get there from our current system. To switch to single payer you need to (1) figure out what services will be covered for every single American, keeping in mind that every benefit makes the plan more expensive; (2) set taxes and out-of-pocket costs so they’re affordable for every family; and (3) decide what to pay providers (set prices too high and the system is too expensive to sustain, set them too low and you force some doctors and hospitals out of business). Balancing all these variables is tricky, especially since the numbers are enormous. Over the next ten years we’re expected to spend over $40 trillion on health care, so a few percentage points here or there can mean the difference between a working system and an economic crisis.

Bernie calls his plan Medicare-for-all, but it covers much more than Medicare currently: dental, vision, hearing, and long-term care are all included in Sanders plan.

Sanders’ plan would also elminate out-of-pocket costs entirely, so no more deductibles, copays, or coinsurance for anyone. This was the most surprising part to us. Right now deductibles are obviously too high for many families– even people with insurance are struggling to pay medical bills– but some cost-sharing does reduce demand for unnecessary care. (If you pay nothing out-of-pocket, you might not think twice about going to the ER for an itchy throat, or getting a third MRI for a headache the doctor insists is nothing.) Doing away with out-of-pocket costs altogether increases the cost of Bernie’s plan dramatically.

Sanders says that all of this– moving everyone with private insurance onto the federal ledger, expanding the range of services covered, and eliminating all deductibles and copays– would cost the government $1.38 trillion dollars per year. He’d pay for that with:

Unless you’re super rich, this would be a phenomenal deal. Most Americans get coverage through an employer, with employees paying 20-30% of premiums on average and employers picking up the rest. Last year, average employee contributions for family coverage were $4,955, or about 9.5% of the median household income, so a 2.2% income tax would mean huge savings for much, much better coverage for most people. Meanwhile employers spend, on average, 8.5% of total compensation on health benefits, so a 6.2% payroll tax would save them money too. (Well, sort of… Economists generally figure that employers pass the cost of both health benefits and payroll taxes along to workers in the form of lower wages. So whatever your employer pays for health benefits is money coming out of your pocket.)

Medicare recipients would also make out. Bernie’s plan would eliminate the deductibles, premiums, and coinsurance they’re currently responsible for, while expanding their coverage to include hearing, vision, preventive dental, and long term care– all for just 2.2% of their income.

Sounds almost too good to be true, right? About that…

Why it doesn’t add up, part 1: Missing revenue

Before Sanders released his health plan, the website Politifact did some back of the envelope calculations based on his 2013 Senate bill. They found that a 2.2% income tax would generate between $126 billion and $150 billion (and that includes taxing families making below the poverty line, who, according to Sanders, would be exempt). That’s $60-$80 billion short of what Sanders’ plan says. Similarly Sanders expects the payroll tax to bring in $630 billion. According to Politifact’s figures (which are based on a higher payroll tax of 6.7% that Sanders proposed in 2013) this part would generate just $432.5 billion, a $200 billion difference.

We’re not tax experts though, and while Politifact was transparent in its its math, we wondered if they missed something important, like inflation or population growth, that would account for the shortfall. But recently some tax experts, the Committee for a Responsible Federal Budget (CRFB), did look at Bernie’s plan, using estimates from the Congressional Budget Office and Joint Committee on Taxation. They found that the plan’s taxes will generate $300 billion less than what Sanders claims.

Still that’s not even the biggest number that’s unaccounted for.

Why it doesn’t add up part 2: The cost

Under the “How much will it cost?” section of Bernie’s plan, there’s just one sentence: “This plan has been estimated to cost $1.38 trillion per year.” Seriously, that’s it.

The U.S. is expected to spend about $41 trillion on health care over the next ten years, and roughly half of that currently comes from the government. To move all other spending onto the federal side and expand what’s covered for just $1.38 trillion per year, he’d need to cut health spending by 25%, or roughly $1 trillion dollars annually.

The only official explanation from the Sanders campaign about where it plans to find a trillion dollars in savings is in a two-page document from Gerald Friedman, the University of Massachusetts economics professor who did the cost estimates. It says only that the savings comes from “reduced spending on administrative activities” and “reduced spending on monopoly prices for pharmaceuticals and medical devices.”

Sanders’ staffers did provide a bit more detail when speaking to Dylan Matthews at the website Vox. The campaign was responding to an analysis from Kenneth Thorpe, a professor of health policy at Emory University, which found that Bernie’s plan would cost about $2.47 trillion per year– nearly twice what Bernie claims.

Now Thorpe may have overestimated a bit– single-payer advocates say that his figures for administrative cost savings are too low, for instance. Still, at least he clearly lays out the assumptions behind his numbers (his full analysis is here). The Sanders campaign, on the other hand, gives the impression that its making things up on the fly:

Administrative costs: Friedman, the one who did the original analysis for Sanders, told The New York Times that lower administrative costs would reduce total health spending by 10.7%. Meanwhile, Sanders’ policy director, Warren Gunnels, told Vox that lower admin costs would reduce it by 16%, then later revised to 13% in an email. That’s three totally different estimates from the Sanders’ campaign; and while a few percentage points may not seem like a big deal, the difference between each of them is $120 billion annually. To get a sense of scale, that’s equivalent to all of the spending in the Affordable Care Act.

Drug savings: Gunnels originally told Vox that Bernie’s plan would save $324 billion in prescription drug costs every year. Thorpe pointed out that total national drug spending is only $305 billion annually, which means the pharmaceutical industry would have to fill every prescription in America for free, plus pay the government $20 billion a year to boot. When Vox pointed out that this seemed… unlikely, the campaign lowered its estimate to $241 billion in savings. That’s still a massive 80% cut in prescription drug spending, with no explanation of how you could do it without putting most drug companies out of business.

Sanders assumes $160 billion per year in savings relative to Thorpe because, they argue, he includes elective procedures like plastic surgery, which single-payer wouldn’t cover. Thorpe disputes this: “Cosmetic surgery, really? That’s $12 billion a year and in the second decimal of rounding.” In other words: There’s no way excluding plastic surgery can give you $160 billion of savings.

Increased usage: Thorpe assumes that eliminating deductibles and copays will increase usage by about 10% in private plans. At first, the campaign said spending will only go up 6% due to increased utilization, for a difference of about $216 billion, but revised that to $660 billion, apparently assuming no change in utilization. Like we said earlier, Thorpe’s estimate may be too high, but Sanders’ revised estimate makes no sense.

Why this is so frustrating

David Himmelstein and Steffie Woolhandler, both professors at CUNY’s school of public health and members of Physicians for a National Health Plan, have defended Sanders’ plan, arguing that Thorpe’s cost estimate is too high for a bunch of reasons. But even if you accept all of their assumptions completely, Sanders’ plan would still cost much more than he says. Meanwhile, on the revenue side, it’s even harder to argue that CRFB is wrong, since they’re using numbers from the CBO, the nonpartisan agency that would provide the official budget estimate for the plan if Sanders put it before Congress.

Still it’s possible that Sanders’ estimates are plausible. The only way to tell would be for the Sanders campaign to clearly explain the reasoning behind its numbers, just as Thorpe, the CRFB, and Himmelstein and Woolhander did in their analyses.

Sanders hasn’t done that, at least not yet. What the campaign has done though is make ad hominem attacks questioning the motives of its critics. After Thorpe released his study showing Sanders plan costs twice what he claims, Sanders policy director Gunnels told Vox: “It’s coming from a gentleman that worked for Blue Cross Blue Shield. It’s exactly what you would expect somebody who worked for BCBS to come up with. It’s not even worthy of any type of serious reporting.” Similarly when CRFB released its analysis showing Sanders’ revenue estimates were $300 billion short, Gunnels cited the group’s ties to Pete Peterson, a wealthy investment banker, telling the Huffington Post, “It’s disappointing but not surprising that a group funded by Wall Street billionaire Pete Peterson would issue a misleading and inaccurate report attacking Sen. Sanders health care plan.”

Thorpe did once do a consulting job for BCBS, but he was also hired as a consultant by Vermont when it was trying to bring single-payer to the state. And as the Huffington Post’s Jonathan Cohn wrote about CRFB, Peterson is on the group’s board, but “The center’s analysts have a reputation for intellectually sound work.”

All of this is incredibly depressing if you believe, like we do, that a single-payer approach deserves serious consideration. It’s so rare that single-payer gets this much attention in national politics, so you’d hope that the specific plan that people are discussing is one that doesn’t rely garbage math and magic asterisks. Unfortunately it’s looking more and more like that’s not the case with Bernie’s.

Next post: Hillary Clinton wants universal coverage– but what’s her plan to get there?