Warning: Use of undefined constant wp_cumulus_widget - assumed 'wp_cumulus_widget' (this will throw an Error in a future version of PHP) in /home/customer/www/whatifpost.com/public_html/wp-content/plugins/wp-cumulus/wp-cumulus.php on line 375
 The EPA’s plan to combat climate change and what it means for America’s health
≡ Menu 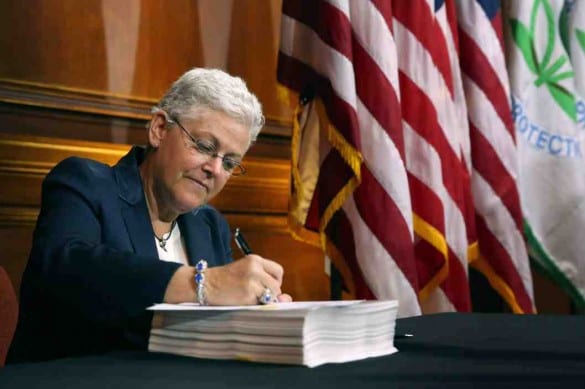 Given all the health problems that climate change is already causing (and the even worse problems it’s expected to cause), it’s pretty important that the world’s second largest polluter of CO2 does something to significantly cut its emissions. Originally the Obama administration was pushing for a system of cap-and-trade, but when that bill died in Congress, the White House moved on to Plan B: regulating carbon through the EPA.

So far the EPA has already put forth strict new fuel-economy standards on cars and light trucks and regulations that would limit carbon pollution from new power plants. The final piece of the agenda, which the White House announced earlier this month, is both the trickiest and most important: reducing emissions from existing power plants. Here’s how the EPA plans to do it, and what it means for our health.

How the EPA’s plan works

The website Vox has a great post explaining in more detail how the EPA’s power plant rule will work, but here’s the quick summary: Each state containing a fossil fuel power plant (DC and Vermont are the only two that don’t) will have its own emissions goal, set by the EPA using a complex formula based on (1) how much CO2 the state emits right now and (2) how much it could reasonably cut.

Each state will have to submit a plan by June 2015, and they have a lot of flexibility in how they choose to meet these targets. According to Vox:

On the other hand, if states refuse to comply, the EPA will step in and write the plan for the state. Altogether, the EPA estimates that these plans will lead to a reduction in U.S. power plants’ carbon emissions of 30% below 2005 levels.

Health benefits of the EPA plan

Unfortunately, the new limits on CO2 emissions from power plants will do little to address these warming-related health issues on its own. The United States is just one country and, well, it’s not called “global warming” for nothing. The hope is that if the U.S. cuts its emissions, other major polluters will follow, and it will make it easier to negotiate a new global treaty on carbon emissions. There’s already been one promising sign: on the same day the EPA announced its plan, China– by far the world’s biggest total carbon polluter (the U.S. beats it per capita)– announced that it would cap its total emissions for the first time by the end of the decade.

However, the rule is expected to have some other big health benefits. As states cut back on their use of fossil fuels, there will also be a roughly 25% reduction in the emissions of nasty chemicals like particulate matter, nitrogen oxides, and sulfur dioxide that tag along with CO2 when these fuels are burned. According to the White House:

From the soot and smog reductions alone, for every dollar invested through the Clean Power Plan, American families will see up to $7 in health benefits. In the first year that these standards go into effect, up to 100,000 asthma attacks and up to 2,100 heart attacks will be prevented. These standards will also help more kids to be healthy enough to show up to school – with up to 72,000 fewer absences in the first year. The benefits increase each year from there.

Now we should point out that this doesn’t take into account other EPA rules that have been implemented since 2005. For example, the clean air transport rule recently upheld by the Supreme Court also limits emissions of nitrogen oxides and sulfur dioxide, and it’s expected to prevent 240,000 asthma cases. Many steps that states take to comply with that rule will also help them meet their CO2 targets under the new rule, but in those cases the health benefits of each rule are being double counted.

Similarly, using 2005 as a benchmark might make the new rule’s 30% CO2 reduction look steeper than it actually is. Our carbon emissions are already about 12% below what they were in 2005, thanks to the lingering effects of the financial crisis and the natural gas boom. Many environmental groups will be pushing for an even stricter target during the public comment period before the EPA finalizes the rule.

The rest of Obama’s climate agenda

Reducing carbon emissions from existing power plants was by far the most ambitious part of President Obama’s climate plan, but as the Center for American Progress reports, there’s a lot more to it. The plan will:

[Those are just a few of the provisions– you can read President Obama’s entire Climate Action Plan here.]

UPDATE: The White House just released a one year progress report on the President’s Climate Action Plan. There’s a quick summary here and you can read the entire thing here.

Will it be enough?

It’s hard to say. New York Magazine’s Jonathan Chait, who predicted the EPA’s carbon regulations before pretty much anyone, points out that there are all kinds of things that could still sink Obama’s plan– the Supreme Court could nullify it, a Republican President could reverse it, China and India might not agree to an international treaty. Still, as Chait writes:

“A president cannot save the planet. But it can no longer be fairly denied that Obama has thrown himself entirely behind the cause.”

Previous post: Why climate change is a health issue