Warning: Use of undefined constant wp_cumulus_widget - assumed 'wp_cumulus_widget' (this will throw an Error in a future version of PHP) in /home/customer/www/whatifpost.com/public_html/wp-content/plugins/wp-cumulus/wp-cumulus.php on line 375
 The conservative case for single payer healthcare
≡ Menu

We want to share a couple of charts that illustrate just how insanely high U.S. healthcare costs are. The first comes from Slate’s Matt Yglesias, and it shows government health spending per capita in the United States and Canada over the past decade: 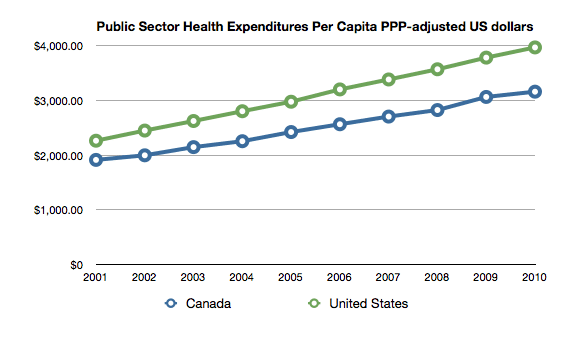 And, as the Washington Post’s Ezra Klein shows, it’s not just Canada: 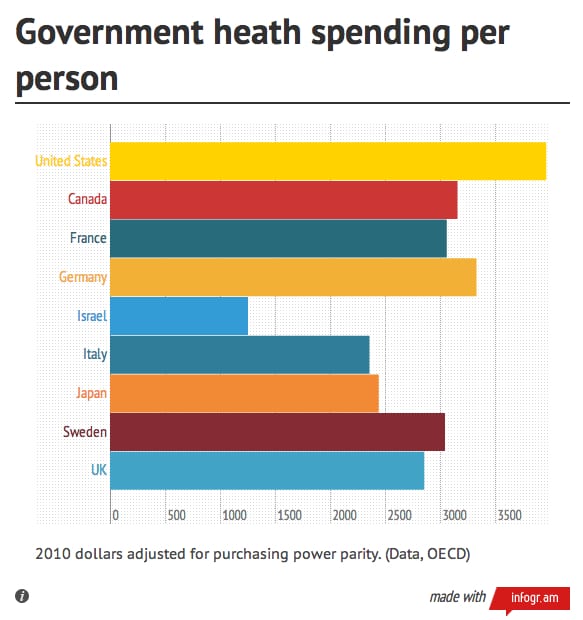 Not only do we spend more on government-provided health care than any other country (while covering way fewer people and without better quality), Klein has another graph showing that our private health spending is, if anything, even more out of control. Add the two together and we get a healthcare system where our total health spending doesn’t even fit on the same scale as other countries’.

How do other countries do it? Some, like Canada, have a “single payer” system (meaning every resident is covered under one government plan), so the government can negotiate an enormous bulk discount from doctors and hospitals. Medicare in the U.S. can only do this a little bit– that’s one reason it costs less than private insurance– because if it sets prices too low, providers can just drop out of the program. Other countries, like France and Japan, have “all-payer” systems, meaning they still have multiple insurers, but every insurer pays providers the same rates, which are set by the government. (For more on how all-payer works, check out our primer on it here.)

What they all have in common is that the government sets prices. In the U.S., conservatives who want limited government have opposed government price controls, but it turns out that’s actually increased the size of our government. Klein writes:

The American health-care system is simply uniquely inefficient. Typically, it’s liberals railing at this fact, but the result is, to a degree that’s almost universally unappreciated, a disaster for conservatives. The U.S government spends more than any other government on health care and is thus much larger than it might otherwise be. That spending also increases our deficits and requires higher taxes. So we’re getting the downsides of government-run health care without the upsides of universal coverage, lower cost  and clear lines of accountability.

As Klein points out, Obamacare should mostly fix the universal coverage problem, but only does a little to take care of the cost problem. If conservatives really want to reduce government spending on health care in the long run without shifting more costs onto us, they should be in favor of the government setting prices… and that means supporting all-payer or single-payer.