Warning: Use of undefined constant wp_cumulus_widget - assumed 'wp_cumulus_widget' (this will throw an Error in a future version of PHP) in /home/customer/www/whatifpost.com/public_html/wp-content/plugins/wp-cumulus/wp-cumulus.php on line 375
 The campaign to educate young people about Obamacare… and the GOP push to stop it
≡ Menu

After last year’s Supreme Court decision, it didn’t look like there was much opponents could do to derail Obamacare. Aside from convincing states to opt out of the Medicaid expansion, it seemed like Republicans would be resigned to holding meaningless votes for repeal in the House and muttering about how terrible everything will be. Instead, they’ve managed to find a way to sabotage the new law: blocking efforts by the White House and outside groups to help people understand it.

Ask any health policy expert how well Obamacare will work, and the answer you’re most likely to get is, “It depends.” The new law is expected to cover tens of millions of Americans, but that coverage doesn’t happen automatically– the uninsured have to log onto an exchange and purchase it (or find out they qualify for Medicaid).

People who are currently dealing with medical issues, or are more likely to need treatment in the future because they’re older or unhealthy, will almost certainly seek out coverage in these new marketplaces. But for younger, healthier Americans, health insurance is often pretty far from their minds– they might not be in a hurry to buy coverage under the new law, especially if they don’t understand it. But if young, healthy people don’t get coverage everyone loses– young people without insurance will be screwed if they get sick or have an accident, and premiums will skyrocket for the older, sicker pool of people on the exchanges.

The White House figures that to keep premiums on the new exchanges stable, about 2.7 million 18 to 35 year-olds will have to buy coverage (of about 25 million who will be eligible): 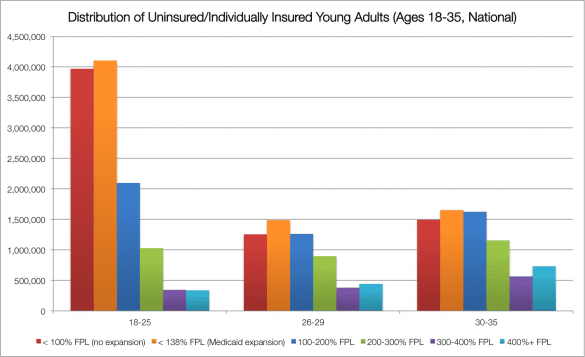 To hit this target, health officials are planning a big outreach campaign aimed at signing up young adults. Meanwhile, conservatives are working to undermine their efforts on several fronts.

The Affordable Care Act included just $1 billion for implementing the new law– not nearly enough according to estimates from the Congressional Budget Office. Health and Human Services requests for additional funds last year have been blocked by Congressional Budget Office. Most of the funds the White House does have will go to getting the exchanges up and running– when the law was written they didn’t expect so many states to pass off responsibility for running their exchanges to the federal government– meaning less money is available for outreach.

Preventing the White House from working with outside groups

Without enough funding to implement the law, Health Secretary Kathleen Sebelius has encouraged health industry executives, community organizations, and church groups to work with Enroll America, a nonprofit foundation set up to help educate Americans about Obamacare. As we reported a few months ago, Republicans have criticized Sebelius for her efforts, accusing her of “shaking down” health executives.

The New York Times reports that these efforts to generate a scandal scared off some possible donors:

A federal health official said potential donors had become “gun-shy” because of the onslaught of Republican criticism of the administration’s fund-raising practices. A person involved in raising money for Enroll America said that many corporations and philanthropies “are risk-averse and do not want to be involved in anything controversial.”

Republicans have worked to block other potential partnerships as well. When Massachusetts enacted its own health reform in 2007, to help get the work out state officials enlisted the Boston Red Sox in a $3 million marketing campaign that included a theme night, announcements during pregame ceremonies, an information booth at Fenway, ads and interviews on New England Sports Network during games, and featuring players in ads and enrollment efforts. When the White House approached the NFL and NBA about a similar partnership, Mitch McConnell and John Cornyn, the highest ranking Republicans in the Senate, sent letters to the leagues warning them to stay away. Shortly afterward the NFL announced it has “no plans” to engage on Obamacare.

Both supporters and opponents of Obamacare can agree that the law is complicated, and plenty of people still have questions about it. But as The Hill reports:

Some Republicans indicated to The Hill they will not assist constituents in navigating the law and obtaining benefits. Others said they would tell people to call the Department of Health and Human Services (HHS).

“Given that we come from Kansas, it’s much easier to say, ‘Call your former governor,'” said Rep. Tim Huelskamp (R), referring to HHS Secretary Kathleen Sebelius. […]

“We know how to forward a phone call,” said Rep. Jason Chaffetz (R-Utah).

To be fair, a number of very conservative Republicans in Congress have said that while they won’t help people sign up for Obamacare, they will answer constituents questions. Still that’s a low bar, especially when compared to the last rollout of a major healthcare program. From the website Politico:

It’s a far more muted approach than the one Democrats took in 2006, when the Medicare Part D prescription drug benefit kicked in with a dizzying menu of choices that confused seniors. Many Democrats who opposed the Medicare law enacted under former President George W. Bush left their political sentiments in Washington and went back home to teach their constituents about the benefits, which include subsidies for low-income seniors.

Bush’s Medicare chief at the time, Mark McClellan, recalls line dancing with a liberal Democrat, Rep. Stephanie Tubbs Jones, at a Cleveland event to promote the benefit that she had voted against. “Most Democrats didn’t vote for the bill, [but] there were a lot of events with Democrats present,” McClellan said. “I don’t think the message was, ‘You should enroll, and this is the greatest thing ever.’ It was: ‘This is an important program you should know about.’”

Meanwhile, FreedomWorks and Americans for Prosperity, conservative action groups founded by the Koch brothers, have launched their own campaigns to encourage the uninsured not to buy health insurance:

“We’re trying to make it socially acceptable to skip the exchange,” said Dean Clancy, vice president for public policy at FreedomWorks, which boasts 6 million supporters. The group is designing a symbolic “Obamacare card” that college students can burn during campus protests.

Mother Jones’s Kevin Drum  points out the incredible cynicism , and wonders if FreedomWorks “plans to help out the first person who takes them up on this and then contracts leukemia,” asking, “What’s next? A campaign to get people to skip wearing seat belts? To skip using baby seats in cars? To skip vaccinations for their kids?”

Efforts to convince young people not to purchase health coverage would seem to run counter to conservative rhetoric about taking “personal responsibility,”– after all some will get sick, and when they go to the hospital and can’t afford the care they receive, everyone else is forced to pick up the tab (after these young people go bankrupt of course).