Warning: Use of undefined constant wp_cumulus_widget - assumed 'wp_cumulus_widget' (this will throw an Error in a future version of PHP) in /home/customer/www/whatifpost.com/public_html/wp-content/plugins/wp-cumulus/wp-cumulus.php on line 375
 The Best Health Care Graph We’ve Seen
≡ Menu

One graph from National Geographic quickly and clearly illustrates pretty much everything that’s wrong with our health care system in the U.S.: 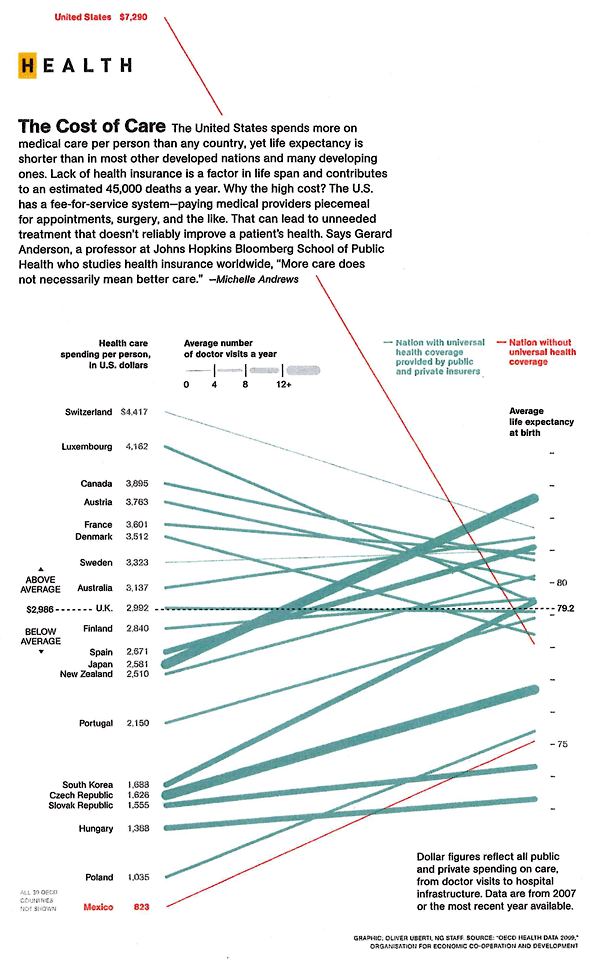 The graph compares the health care systems of developed countries in terms of cost per person, life expectancy, and number of doctors visits. All of these countries are members of the Organization of Economic Cooperation and Development, which means that they’re all free market democracies, and they’re all considered either upper-middle income or high income. A couple of things we wanted to point out:

Here’s why we like the graph:
On most measures comparing health care systems, the United States ranks dead last among industrialized countries. We rank 37th in the world in infant mortality, and 34th in maternal mortality– a woman in the United States is 11 times as likely to die during childbirth as a woman in Ireland. A recent report by the Robert Wood Johnson Foundation and the Urban Institute, looked at how well 19 developed countries succeeded in avoiding “preventable deaths,” (those where a disease could be cured or forestalled). The U.S. ranked 19 out of 19.

Still, there are people like Senator Richard Shelby of Alabama who called Obama’s health care reform plan, “The first step in destroying the best health care system the world has ever known.” These “best health care system in the world” people have their own statistics, pointing out the few areas where we do better. They’ll say that we have lower mortality rates for certain kinds of cancer- breast and prostate cancer for example- than those other countries, which is true. They’ll point out that the wait time to see a specialist is lower in the United States- again true (except in Germany, which has shorter waits for specialists than here).

We could counter these statistics with even more statistics (for example, in other countries you’re much more likely to get a same-day appointment with a primary care doctor, and waiting times in the emergency room are much longer here). But then it seems like it’s just up for debate whether or not the U.S. has the best health care system. The implication is that it’s somehow close.

It’s not. What this graph shows is that given how much money we spend per person, we should have hands down, unanimously the best health care system in the world. Americans should all expect to live to 160, and get a diamond covered walker when we turn 100. Yet instead, we spend on average two, three, in some cases four times as much per person as countries that have higher life expectancies than we do.

Even if the health care reform bill passes, it’s just one step (although a major one) towards fixing America’s health care system. Moving forward, clearly there is still a lot we can learn from other countries.

[For more on how health care in the U.S. stacks up, check out this excellent editorial by Nicholas Kristoff in the New York Times.]